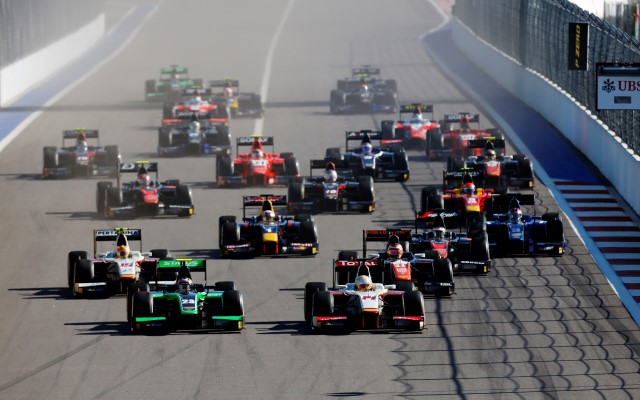 Richie Stanaway took victory for the second time in GP2 in the Sochi sprint race, as Stoffel Vandoorne wrapped up the title with fourth place.

Stanaway took the lead at Turn 2, running side-by-side with polesitter Arthur Pic before the Frenchman went off track.

After a safety car for more first-lap contact, Stanaway was able to build what seemed like a comfortable margin over second-placed Rio Haryanto, with his lead up above three seconds at one stage.

That gap then suddenly came down at one point, and just as the safety car was deployed for a second time for a big penultimate-lap crash for Johnny Cecotto, Haryanto moved past Stanaway.

Stanaway went back ahead under the safety car though and took the chequered flag first to repeat his victory from Monaco.

Haryanto contested on the podium afterwards that he was ahead when the safety car came out and said he would wait to see if the stewards choose to take any action.

Pic initially ran third but faded, with Raffaele Marciello taking the final podium position and defending it from Vandoorne.

The Belgian only needed to ensure he wasn’t outscored by rival Alexander Rossi by eight points or more to secure the title with two full race weekends remaining.

Rossi finished in sixth place behind Pierre Gasly, who will be investigated after the race for a overtake that was possibly under safety car conditions on the opening lap.

Rossi actually went off on the penultimate corner of the race as the safety car came in, but with overtaking not allowed, Nobuharu Matsushita had to settle for seventh in front of Pic, Mitch Evans and Alex Lynn, recovering from the back of the grid after crashing out of the lead in the feature race.

The first safety car was to recover the car of Marlon Stockinger from the rear of Rene Binder‘s, though Sergey Sirotkin had triggered contact with Dean Stoneman up ahead of that and finished last after a front-wing change and a penalty.