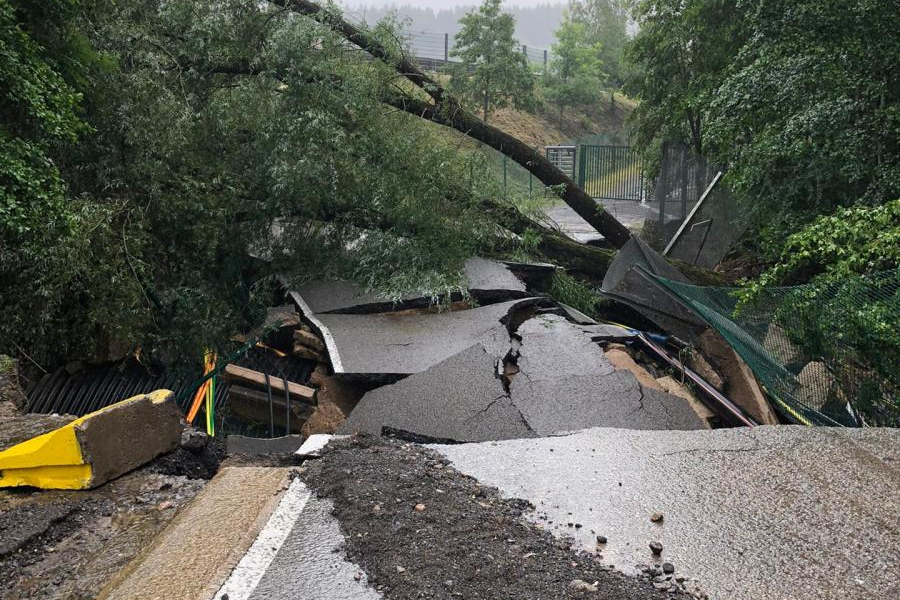 Flash floods have hit Spa-Francorchamps and the surrounding region in Belgium for the second successive month, and this time it has led to fatalities.

The nearby Verviers has been almost entirely sumberged by water as the Vesdre river burst its banks, with evacuations taking place but many people still feared missing and three confirmed dead. Spa town is also primarily flooded closer to the circuit.

At Spa-Francorchamps, the access road to Blanchimont has collapsed and the paddock entry tunnels are rendered unusable too. Other access roads have also been compromised by rising water levels in the Eau Rouge stream and heavy rain.

The Spa circuit office has put out a statement saying: “The track itself was not impacted, but its surroundings do not make it possible to ensure the trackday of that day in the safety conditions necessary for the conduct of motor sport activities: trees threatening to fall, safety fences to replace and restore digital track safety infrastructures.”

While plans are underway to resume circuit acitivities by this weekend, the scale of these floods exceed the previous two that hit in June. The first of those actually moved the track surface due to groundwater flooding and left the run down to Raidillon corner and the sportscar pitlane completely under water (as has this week’s flood), while the second took out the electrics and security cameras around the track which impacted the running of race meetings taking place several days later.

Formual Regional European Championship and BRDC British F3 are set to visit Spa on July 23-25 as part of SRO Speedweek, and while the circuit itself can be driven on, it is the compromising of access roads and other infrastructure that make it difficult to host large-scale events, particularly if further flooding takes out existing repairs as has occurred previously.

Event organiser SRO had no comment to make beyond what the circuit had put out when contacted by Formula Scout.

Spa-Francorchamps meanwhile said in addition to working on its own repairs it is keen to support the local recovery proccess – with many homes and vehicles lost to the floods.

The Belgian Grand Prix in late August may also be under threat should the torrid weather continue, with the split paddock system relying on full access to the ancillary infrastructure. COVID-19 case numbers are also rising sharply in Belgium.

Nannini remains with Campos in F2 for Silverstone round