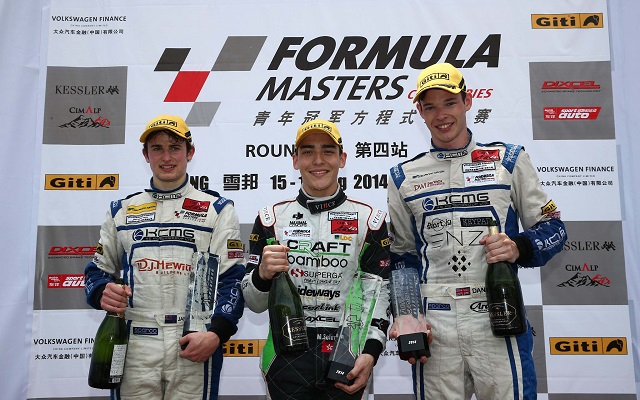 Formula Masters China championship contender Matthew Solomon picked up his third consecutive victory in the series in race one at the Sepang International Circuit.

The driver from Hong Kong displayed a mastery of wet track conditions which saw him finish an impressive nine seconds clear of the opposition.

Series newcomer Jake Parsons got off to a good start to lead the opening stint of the race, but wound up spinning out of victory contention on lap three. As such, Solomon inherited first, but soon came under pressure from points leader James Munro.

Munro kept up the challenge until lap five, but ended up having a spin of his own, which allowed Solomon to cruise to the finish. The Hong Kong driver did just that and, having also banked the fastest lap of the race, ensured pole for race two.

KCMG teammates Munro and Dan Wells battled it out for second, with Munro narrowly edging ahead. Parsons recovered to take a solid fourth on his debut, while Humpuss racer Darma Hutomo secured fifth.

Yuan Bo fought his way up the grid to pick up sixth, almost twenty seconds ahead seventh-placed Mandla Mdakane. Another Meritus driver Daniel Woodroof was eighth, while ADAC Formel Masters regular Philip Hamprecht and Zen Motorsport’s Ronald Wu made up the rest of the top ten.

Munro’s best lap puts him on front row alongside Solomon, with Wells and Yuan Bo making up row two.