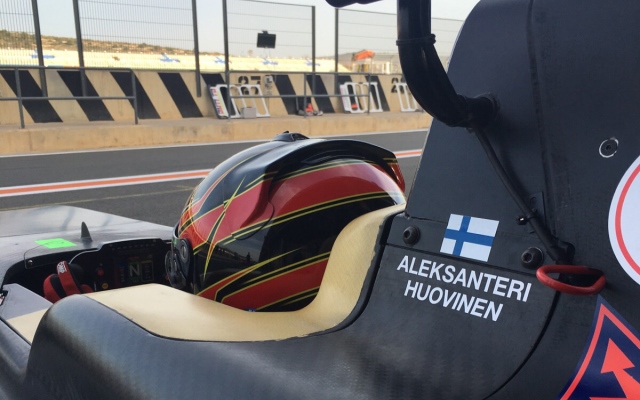 Finn Aleksanteri Huovinen will move into BRDC Formula 4 from the SMP series for 2016 after completing Double R Racing’s line-up for its first year in the championship.

Huovinen finished fourth in the inaugural SMP F4 season having been the early pacesetter, winning three of the first four races.

The 19-year-old is this week testing the new BRDC F4 car at Valencia with Double R, which has Finnish roots having been co-founded by Huovinen’s compatriot Kimi Raikkonen.

He joins Brazilians Matheus Leist and Enzo Bortoletto in the finalised line-up at Anthony ‘Boyo’ Hieatt’s squad, which only announced its entry into the series two weeks ago.

?We?re all delighted to see Aleksanteri join the team for BRDC F4 next year,” said Hieatt.

“Alongside Matheus and Enzo we?re confident we?ll have one of the strongest driver line-ups out there.

“We?ve got a long and successful history of working with Finnish and Scandinavian drivers, and big links to Finland through Kimi of course, and I?m confident Aleksanteri is going to be another success.

?He?s impressed us from what we?ve seen in testing so far and I really do think he?ll be right at the front from the word go when the championship starts in March.

“He had some good results in the SMP F4 Championship this year and has adapted to the greater power and downforce of the BRDC car very quickly.

“Everything looks very positive for Double R in 2016.?

Huovinen, who was runner-up in Finnish Formula Ford before moving into SMP F4, said: ?Working with the team so far has been really good, the guys are so professional and really know what to do with the car ? they?ve helped me with my driving too and I?ve definitely found a lot of time already.

?The car is really good, very fast and the downforce is much more than I?ve been used to.

“I think we have a great chance to be competitive next year, I know I can be quick and that the guys at Double R will give me a great car.?

The new Tatuus-Cosworth car introduced by BRDC F4 next season is based upon the FIA F4-specification model used in the SMP series among others, but with greater aerodynamics and engine power.