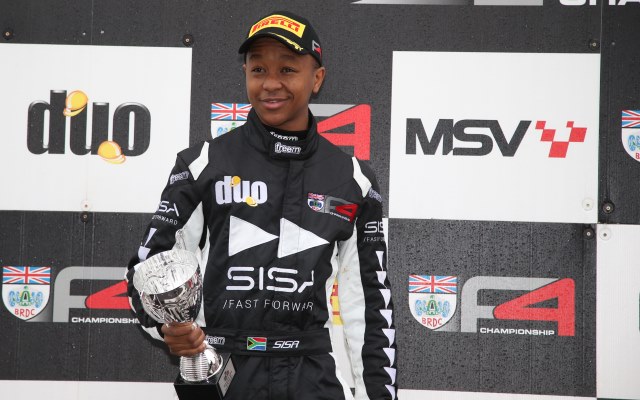 HHC Motorsport BRDC Formula 4 racer Sisa Ngebulana is staying with the team for 2016, becoming the leading outfit’s first signing for next year.

The South African made his single-seater debut with the team in 2015, finishing 11th in the standings with a best finish of second as HHC helped Will Palmer to the title.

Ngebulana then took part in the Autumn Trophy to get a first taste of the championship’s new Tatuus-Cosworth car, and finished third in the standings after four podiums.

“I’m happy to be back in the 2016 Duo BRDC Formula 4 Championship with defending champions HHC Motorsport,” said the 17-year-old.

“I had a good run during my first year in 2015, including a very positive Autumn Trophy with the new car, and I’m looking to improve on my performances further in 2016 .

“The staff at HHC are awesome and a great bunch to work with, so I’m excited to be in their company once more in 2016.”

Team principal Charlie Kemp added: ?We are delighted to have Sisa back with us for the 2016 season.

“He made great progress in his first season racing in Europe last year and achieved some strong results, with his Autumn Trophy performance a particular highlight, so we are looking forward to continuing our relationship into next year and seeing what we can achieve together.?