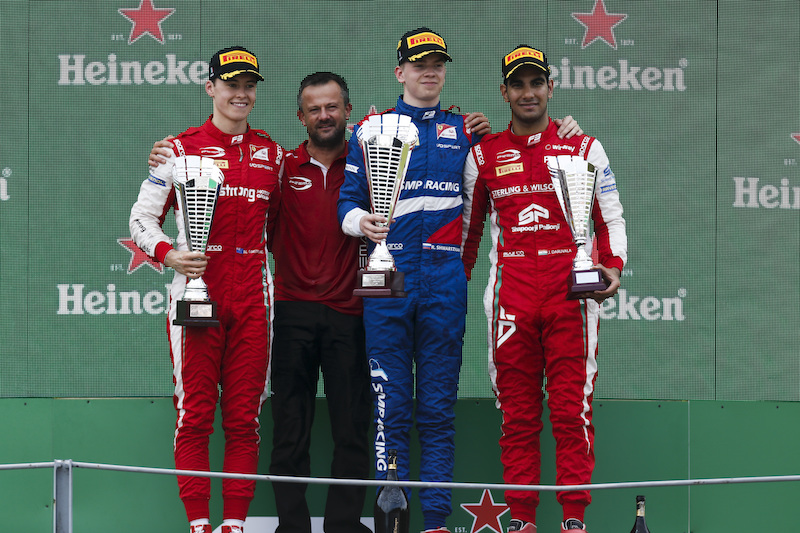 Robert Shwartzman triumphed in a Prema 1-2-3 in the first FIA Formula 3 race at Monza to increase his championship lead, as the race ended behind the safety car after Alex Peroni suffered a huge accident at Parabolica.

Shwartzman, who started eighth on the grid after being one of a number of drivers who were given penalties after yesterday’s qualifying session, made his way through the field to take victory ahead of his Prema teammate, and fellow Ferrari Academy Driver, Marcus Armstrong.

It was a chaotic start to the race, with Lirim Zendeli taking the lead from Christian Lundgaard early on, but the pair came together at the Parabolica on lap three, causing Zendeli to retire a lap later, while Lundgaard was forced to pit with a damaged front wing.

That allowed Armstrong to take over the lead, and once Shwartzman passed Richard Verschoor for second place, the Russian hunted down his Prema teammate and overtook him on lap 15.

Armstrong attempted to close back in on Shwartzman but never got the opportunity to try and re-take the lead, as on lap 19 Peroni – who had been running in sixth place – suffered a violent crash when his car was launched into the air by a kerb in the Parabolica run-off.

The car eventually landed on top of the barrier, and the Campos Racing driver walked away from the incident and was taken to the medical centre to be checked over.

With the car situated in such a precarious position, the marshals were unable to remove the car from the track in time, and the race finished under the safety car.

Jehan Daruvala, who had started tenth had a great start to the race, and followed Shwartzman through the field, eventually finishing third to complete a podium lock-out for Prema, which already sealed the teams’ title last time out at Spa.

Yuki Tsunoda ended up fourth ahead of the MP Motorsport car of Verschoor, while Pedro Piquet crossed the line in sixth.

Juri Vips had a race to forget after crashing out on lap eight, after colliding with Keyvan Andres whilst making a move for 15th position.

The Hitech GP driver clipped the back of Andres’ car and ended up hitting the wall at the first chicane, causing him to retire from the race.