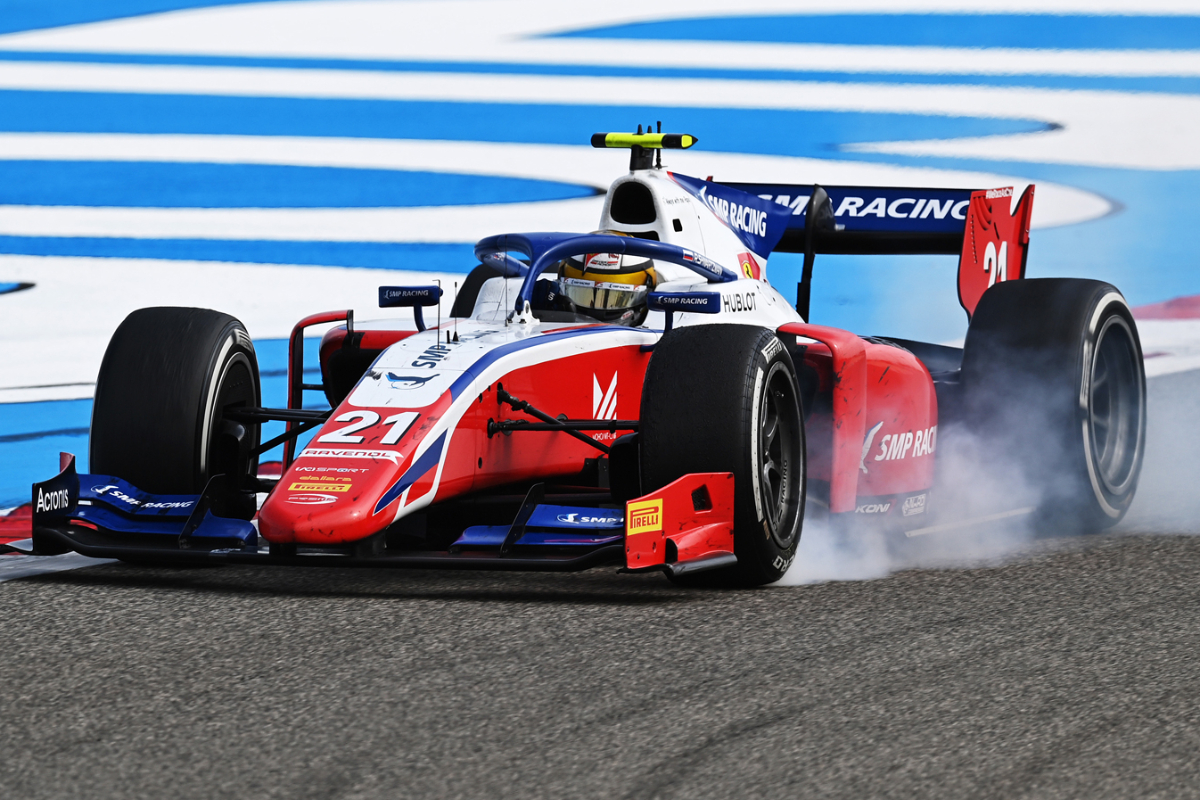 Prema driver Shwartzman started on reversed grid pole, but Carlin’s Tsunoda made the best launch from third and challenged him into Turn 1.

Shwartzman held on, as Tsunoda had light contact with ART Grand Prix’s Marcus Armstrong. This gave Tsunoda a puncture, and he dropped down the order before pitting.

A safety car was brought out early in the race as HWA Racelab debutant Theo Pourchaire came to a stop after his in-car fire extinguisher went off at Turn 1.

On the restart, Virtuosi Racing’s Ilott was following points leader Mick Schumacher for fourth. The Prema driver locked up going into the tricky Turn 9-10 complex, Ilott lost control, and clattered into Tsunoda’s team-mate Daruvala who was just ahead. Daruvala’s race was ended by the clash, while Ilott was handed a drive-through penalty.

Schumacher evaded contact but lost out to Charouz’s Pedro Piquet as he tried to regain momentum.

This brought out the virtual safety car for a period. Once green flag conditions resumed, Shwartzman was able to command the race at the front from Hitech’s Nikita Mazepin.

Mazepin started fourth but had a poor getaway, having briefly stalled on the formation lap. He dropped to the lower reaches of the points but was able to rise all the way back up the order after lengthy battle with Schumacher.

Piquet held third for a long time but was denied a first podium when he came to a halt on the penultimate lap with a technical issue. This promoted Deletraz to third – the highest of the alternative strategy runners.

Armstrong eventually took fourth to round out a fairly strong weekend. Guanyu Zhou (Virtuosi) made up some nine spots to take fifth, and Christian Lundgaard (ART) was similarly effective from 19th on the grid.

Schumacher eventually took seventh to extend his points lead going into the final round, ahead of feature race winner Felipe Drugovich.

HWA’s Artem Markelov rounded out the top 10 having started last, benefitting from a last-lap puncture for Aitken. Tsunoda and Ilott recovered to 15th and 16th.