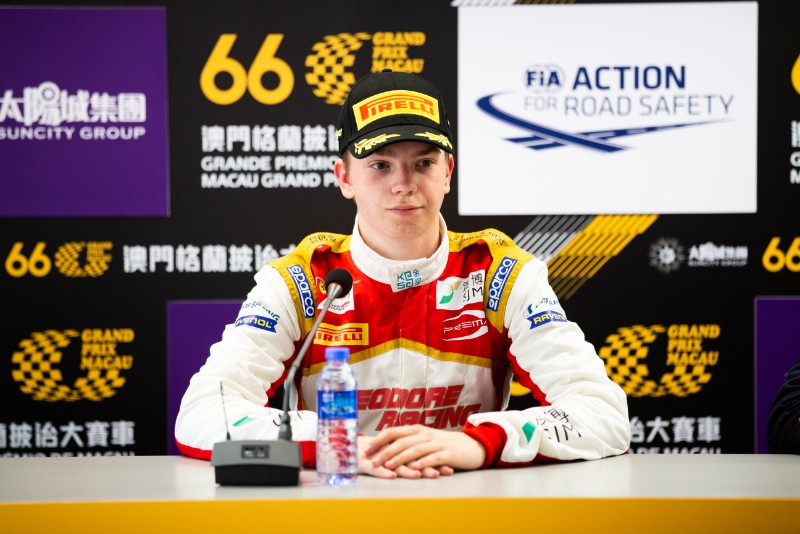 Robert Shwartzman believes he may have been too cautious during the moments where he could have challenged Juri Vips for the lead of the Macau Grand Prix qualification race.

The Prema driver started and finished the race in second position behind Hitech GP’s Vips, and failed to utilise the slipstream to pass the leader at either the start of the race or a safety car restart.

“It wasn’t the best start. It was decent but for sure it was not as good as Juri’s start,” said Shwartzman.

“I lost a bit of pace, also Christian [Lundgaard] did a really good start so he was right behind me. Coming to Lisboa he was really close, and also going on the outside.

“We were taking it all safe, which was right I think because there’s no point of risking it in the first lap – there is DRS, there is time to get close, to get past.

“Everything was clean there, I kept second position and basically the safety car came out straight away.

“Juri did a good restart. Generally I wasn’t really far off, but lost quite a lot of time at Lisboa because there was a lot of dust. I had information to take it easier there and to not risk, so I was taking it really, really easy. Maybe I should have pushed more.

“Straight away Juri was out of DRS range. At the beginning he was a bit faster than me, but towards the end I started? catching him a bit, but it wasn’t really enough to get within DRS.”

Shwartzman will start from second on the grid for Sunday’s grand prix race, which also delivers the FIA Formula 3 World Cup, and believes this time he can challenge Vips for victory.

“Tomorrow is going to be the same [strategy]. Do a good start and be in the right position for Lisboa, then try to survive the first lap. Hopefully going to be in the top two, top three.

“Pace-wise we’re really close to each other. I had some battles this year with Juri, and for sure it’s going to be an interesting one tomorrow. Not planning to do anything stupid. If I have a faster car or a better pace, and I have a possibility to do a manoeuvre, for sure I will do my best to get past.”

Marcus Armstrong and Frederik Vesti, Shwartzman’s two Prema team-mates, were held up by the opening lap crash that caused the safety car period. They dropped from the 10 to the very back of the field, and were only able to recover to 17th and 18th.