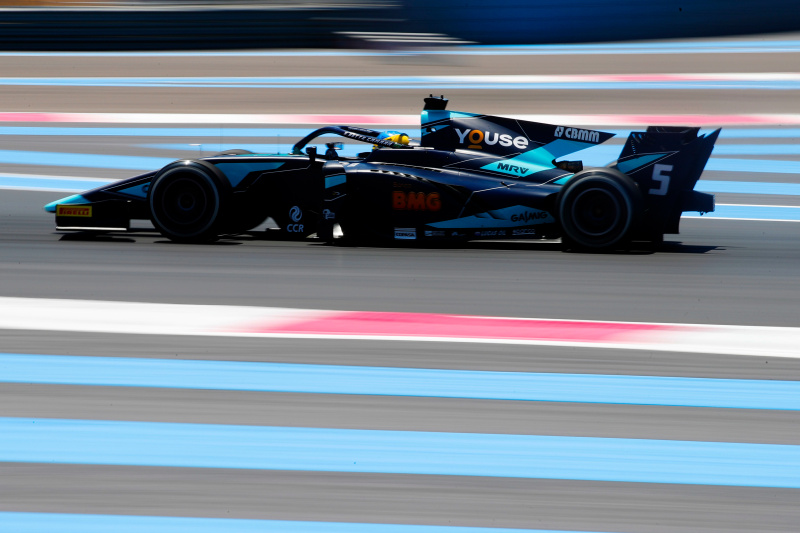 Sette Camara’s programme was inverted compared with the majority of the field – the Carlin driver opting to record his qualifying simulation runs in the second half of the session rather than the first.

De Vries had set the early benchmark pace, with a 1m44.609s. Virtuosi’s Luca Ghiotto recorded the session-best pace through sector two, but lost time at the end of the lap to provisionally grab second place, 0.060s adrift.

As they emerged from the pits for long-run evaluation, both were about to be shuffled back by Sette Camara. The DAMS driver vaulted from 15th on the timesheet to top spot with a 1m44.566s.

The Brazilian then improved again to end the session with a 1m44.009s time, beating de Vries by a comfortable 0.6s margin.

Despite also battling for top spot with de Vries in the opening exchanges, championship leader Nicholas Latifi – fresh from completing F1 opening practice for Williams – slipped back to eighth.

His last qualifying run was abruptly ended by a spin at Turn 8 after he was wrong footed on the entry to the corner by a slow-moving Giuliano Alesi.

Ghiotto in third was over a tenth clear of Prema’s Mick Schumacher, who ended the session in fourth after having threatened to topple de Vries’ time early on.

Sean Gelael wrestled with oversteer throughout the session but still managed to post a time good enough for seventh.

Trident’s Ralph Boschung edged Nobuharu Matsushita, who rounded out the top 10 for Carlin despite suffering two off-track moments during the 45-minute session. His team-mate Louis Deletraz was 11th.

Alesi was part of the exclusive club of drivers to improve in the second half of the session. He climbed above Dorian Boccolacci in a tussle which eventually decided 12th and 13th on the timesheet.

Boccolacci’s team-mate Jack Aitken ended up only 15th on the timesheet.

Nikita Mazepin was 14th, but looped his ART-prepared car at Turn 8 in the dying moments of the session. Stalling the car, the incident neutralised the final laps of the session.