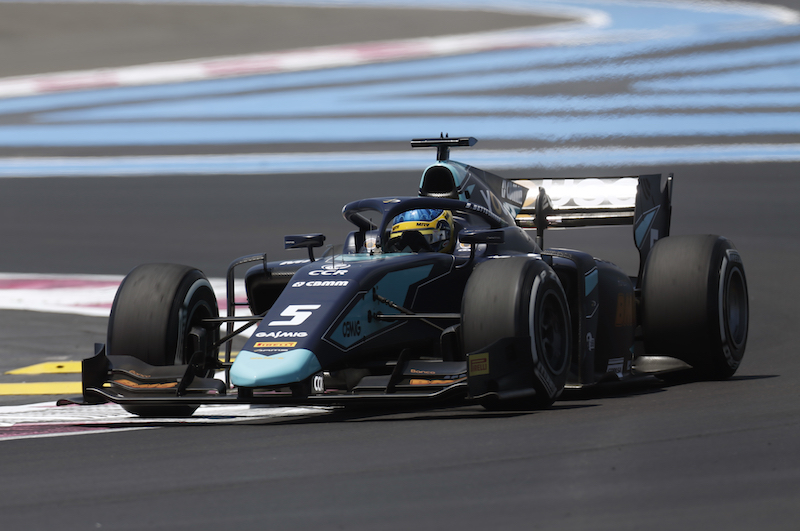 Sette Camara, who last clinched pole position at Budapest last season, propelled his DAMS-prepared car to a 1m43.024s to lead the session at the halfway mark by a comfortable 0.459s.

The second and final runs of the session were complicated when Ralph Boschung’s car stopped at Turn 6, with the resultant red flag halting the majority of the field halfway through their hot laps and with just 2m59s left on the session clock.

When the session restarted, drivers rushed through preparation laps in order to open up a final qualifying attempt before the chequered flag.

Only two drivers were able to improve in the dying moments of the session. Guanyu Zhou, who had been on course to launch into the top three before the Boschung-induced red flag, set a session-best time in sector two en route to improve from 11th place to second for Virtuosi.

Jack Aitken was able to leap-frog ART Grand Prix’s Nyck de Vries, the Campos driver ending up in third. De Vries was one of only two drivers to cross the line before the late red flag, along with fifth-placed Callum Ilott.

Zhou and Aitken’s improvements were not enough to topple Sette Camara, who ended qualifying backwards in the run-off area at Turn 12 after he looped his car on corner entry.

His team-mate Louis Deletraz was one party involved in the incident which led to the first red flag of the session. During the first out-lap of the 30-minute session, Giuliano Alesi collided with the back of Deletraz as the two warmed their tyres on the Mistral Straight.

Alesi’s car launched into the air and the Frenchman suffered session-ending suspension damage. Deletraz managed to recover to the pits and Carlin worked quickly to repair the rear wing and top wishbone on the rear suspension in just 15 minutes. Deletraz qualified 12th.

Mick Schumacher was eighth for Prema, ahead of Campos’ Dorian Boccolacci, while Sean Gelael rounded out the top 10.

Championship contender Luca Ghiotto could only manage 11th for Virtuosi and a three-place grid penalty for his contact with Mahaveer Raghunanthan during the Monaco sprint race will see him demoted to 14th on the grid.

At his home race, Arden’s Anthoine Hubert was another to stop on track with an issue, doing so after emerging from the pits for his final run.

ART Grand Prix’s Nikita Mazepin’s session ended after just two minutes when his car trailed plumes of smoke on entry to the pitlane.