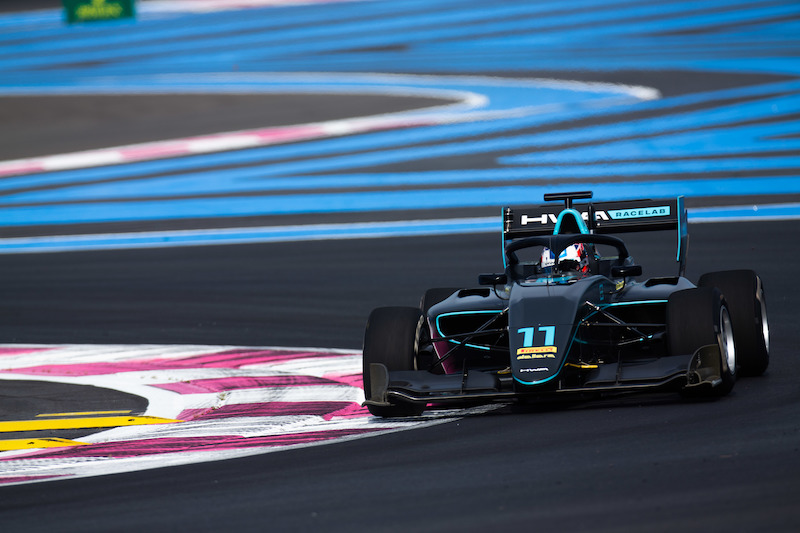 HWA’s Jake Hughes snatched FIA Formula 3 pole position at Paul Ricard away from Prema Racing’s Jehan Daruvala, who dominated the session up until the final lap.

Daruvala claimed provisional pole with his first lap of the 30-minute qualifying session and proceeded to lower the benchmark on each timed lap that followed, fending off Christian Lundgaard, Leonardo Pulcini and Robert Shwartzman who had all briefly grabbed top spot before Daruvala instantly topped their times.

The only lap in which Daruvala failed to improve on his previous best was his last effort in the session. Hughes took the opportunity, recording session best times in sectors one and two to overcome Daruvala’s grip on pole and snatch top spot by 0.087s.

Ferrari junior Shwartzman, who entered the final run as the closest threat to team-mate Daruvala’s pole did manage to improve his time on his last lap – recording a time to match the Indian’s pace through the first two sectors – but lost over two tenths through the technical final sector.

Marcus Armstrong was on course to make it three Premas in the top four, after he recovered from a slugglish start to the session with strong pace late on. Pedro Piquet denied Armstrong fourth place with a blistering final lap, the Trident driver leaping up from outside of the top 20.

Pulcini was sixth for Hitech GP, ahead of his team-mate Juri Vips, who delivered impressive straight line speed throughout the session to consistently post rapid times through the second sector.

Bent Viscaal popped up to grab eighth place in the dying moments of the session as the second HWA-prepared car to vault up the field late on.

Practice pacesetter Niko Kari was ninth for Trident after a snakes and ladders session in which he sat as high as third and as low as 17th.

Despite setting the pace during pre-season testing at Paul Ricard, ART Grand Prix’s Lundgaard slipped back to 12th after struggling to improve during his second run.

He was still the fastest ART driver, with reigning Eurocup champion Max Fewtrell qualifying 14th and David Beckmann failing to make an impression on the session in 22th.