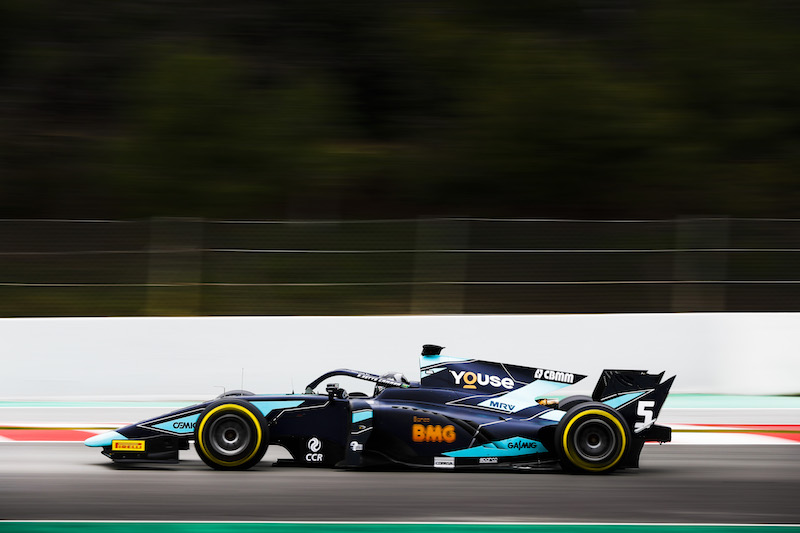 Sergio Sette Camara topped the times on the second day of Formula 2 pre-season testing in Barcelona.

During a cold morning session marked by qualifying simulations, Sette Camara produced a 1m27.392s in the final 30 minutes to eclipse yesterday?s pacesetter Nyck de Vries by just over a tenth.

The Virtuosi pair of Guanyu Zhou and Luca Ghiotto were third and fifth respectively, with the Italian?s best lap around seven tenths slower than Sette Camara?s best. The duo were split in fourth by Carlin?s Louis Deletraz, who would again finish in the top five during a slower afternoon session.

Having missed yesterday?s morning session, Mick Schumacher finished sixth during the morning?s qualifying efforts with his Prema team-mate Sean Gelael also finishing another day in the top 10 in the times.

DAMS? Nicholas Latifi was an early pacesetter in the morning but ultimately fell to seventh. The morning session was truncated by red flags as Jordan King and Mahaveer Raghunathan both found the gravel, before a stoppage on Juan Manuel Correa?s car caused a third halt to proceedings.

Trident?s Ralph Boschung topped the slower afternoon session with a time of 1m28.789s, with Sette Camara down in 18th?as the bulk of the field concentrated on long-run performance.

A spin for de Vries?s ART Grand Prix teammate Nikita Mazepin brought out the only red flag of the afternoon.