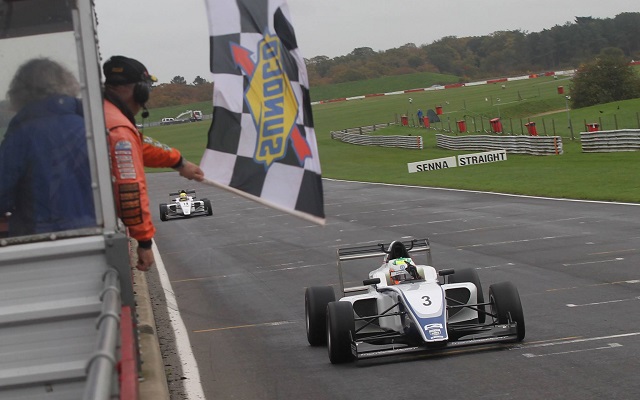 Ben Barnicoat and Harrison Scott qualified on the front row of the grid but on slicks on a damp circuit, made contact on the opening lap and spun off track, handing Fielding the lead.

Scott recovered from fifth and last at the end of lap one to be up to second by the end of lap two, aided by Struan Moore going off as he battled with Fielding.

Scott then quickly eroded Fielding’s five-second margin and got ahead of him on lap six, only for there to be contact that dropped Scott back to third behind Sisa Ngebulana.

Fielding was able to cruise to victory from there, winning by 12 seconds ahead of Scott, who repassed Ngebulana for second.

Faisal Al Zubair completed the classified finishers in fourth with Ben Barnicoat three laps down after pitting with first-lap damage.

Ameya Vaidyanthan was another first-lap casualty who rejoined the action but eventually joined Hillspeed team-mate Moore in retirement.

Scott will start the weekend’s final race from pole after beating Barnicoat to the fastest lap.