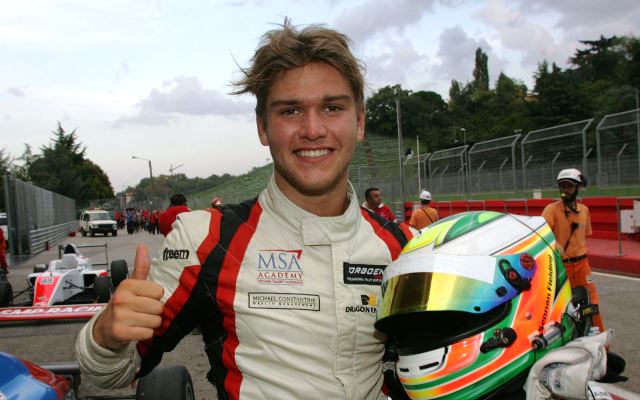 Sennan Fielding will cross the Formula 4 divide in Britain by switching to the new MSA Formula series, joining JHR Developments for their expansion into single-seaters.

The 19-year-old finished fourth in BRDC F4 last year, claiming four victories along the way including a historic treble at Silverstone.

He does already have experience of an FIA-rules F4 series having contested the last two rounds of the Italian championship last year for Euronova, scoring a win and two second-places from six starts. MSA Formula however will use a Mygale chassis rather than the Tatuus deployed in Italy.

Fielding returns to his local team JHR, having run with them to second place in the Ginetta Junior Championship in 2012.

Jamie Hunter’s team has already enjoyed considerable success on the British Touring Car Championship support package that MSA Formula will race on, claiming Ginetta Junior and GT Supercup titles with current BTCC racer Tom Ingram, as well as last year’s Junior crown with Jack Mitchell. The team has past single-seater experience, having been founded to run Hunter in Formula Renault 2.0 in 1995.

?We were evaluating a few different avenues for this year to move my career forward, and whilst I had options in GT racing too, I was keen to remain in single-seaters and get some more experience under my belt there,? said Fielding.

?When Steven approached us about racing in MSA Formula, it was immediately of interest because it?s a new championship with a lot of potential and the right people behind it.

?Rejoining JHR does feel a little like a homecoming in some ways. I?ve known Steven for a long time and have always had a good relationship with him, and I?m excited to be back in the JHR family ? I?m sure we can both get the best out of each other.

?Results don?t lie, and you only have to look at the statistics to see that JHR succeed in pretty much whatever they do. It?s a team of consummate professionals, so whilst I?m under no illusions that it will be a tough challenge this year, I have every confidence they will give me the tools to do the job.?

Hunter added: ?I?m absolutely delighted to have Sennan back with us at JHR. We enjoyed a lot of success together in 2012, and watched him grow and progress in single-seaters last year ? so when the opportunity arose for us to work together again, we were keen to see if we could help Sennan stay in single-seaters in 2015.

?He is not only an extremely gifted driver but also a great guy out of the car with an impeccable work ethic, and I have no doubt that his experience and ability will play a key role in helping us to develop JHR?s budding single-seater arm.”