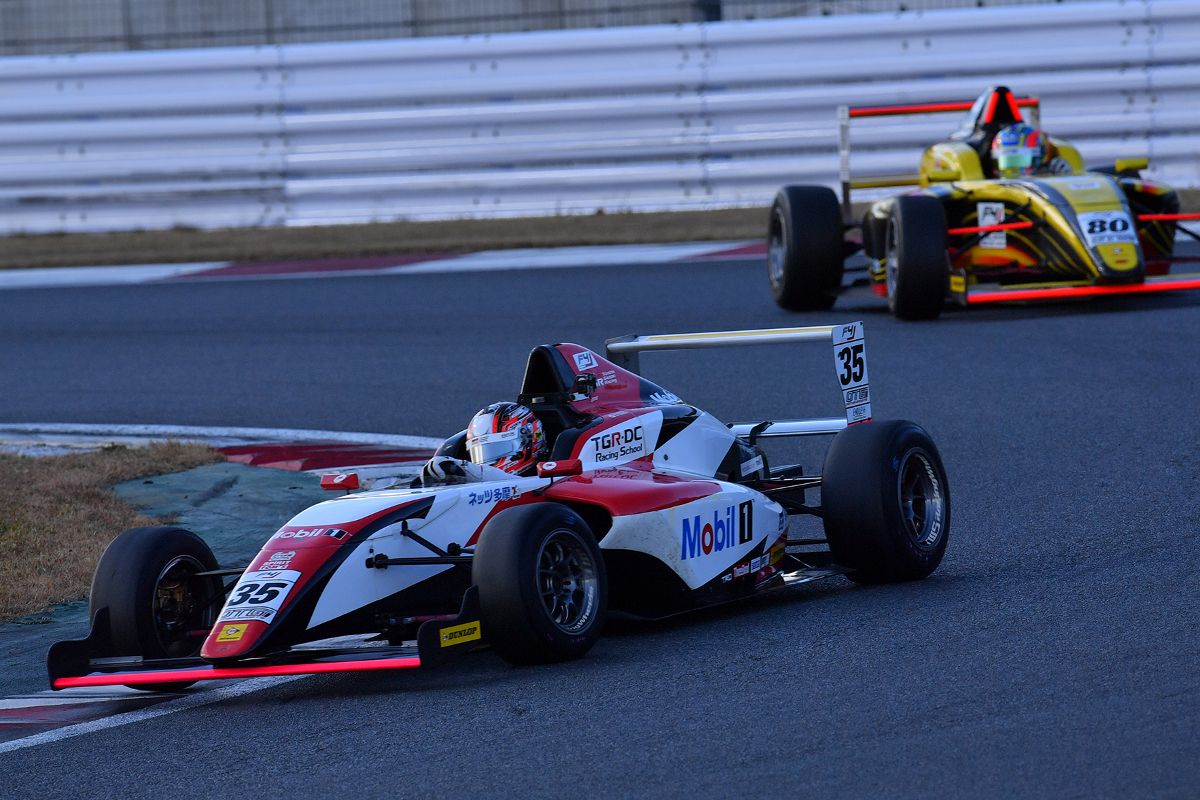 Nonaka reduced Arakawa’s points lead in race one, although both were beaten in qualifying by Reimei Ito who stands as the only non-junior driver to win a race this season.

Ito led just over a lap of Saturday’s race before Nonaka swept around the outside and a gap of 1.4 seconds opened up between them.

Ito was able to close back in at times, and finished 1.488s behind. Arakawa was a further 2.719s behind in third, his lead cut to three points.

Kotaro Shimbara (TOM’S) qualified fourth, but jumped the start then stalled, fell to 17th, recovered to 12th, ignored signals for a drive-through and got black-flagged.

Iori Kimura finished fourth ahead of Jiei Okuzumi, while Yugo Iwasawa passed Syun Koide for sixth but got a 10s track limits penalty that dropped him to ninth.

Ito’s second place wasn’t enough for his title ambitions, and Kakunoshin Ohta had his hopes ended by an opening lap incident with a spinning Sota Ogawa that led to instant retirement.

Ito made a great launch from race two pole, as Arakawa and Nonaka went side-by-side into turn one. Kimura made it three-wide at turn two and snatched second, with Koide also passing Arakawa.

The safety car was then summoned after Dragon went off; Nonaka now leading the championship. On the restart Ito jumped away again, while the manufacturer juniors went four-wide behind.

Arakawa braked super late on the inside to go from fifth to second, but had a few corners of fighting Nonaka after. A four-car battle formed again before safety car boards were shown as Hachiro Osaka, who slowed on the formation lap, and Masayoshi Oyama collided.

Racing resumed on lap eight of 14, with Ito immediately jinking right down the pit straight. Arakawa went further right and braked late again. Both went deep, he led and Ito went behind Nonaka and briefly Kimura too.

Kimura slipstreamed past Ito, and Koide passed too, on the next lap while Nonaka chased leader Arakawa. After several attempted moved he passed him under braking at turn one on the penultimate lap, putting him back in the championship lead.

The late braking brought the Honda juniors back into it too. Ito made a lunge, Ohta passed Kimura for third then got passed back, but Nonaka held on to win the race and title.

Memories of 2001: When Wilson won out over Webber