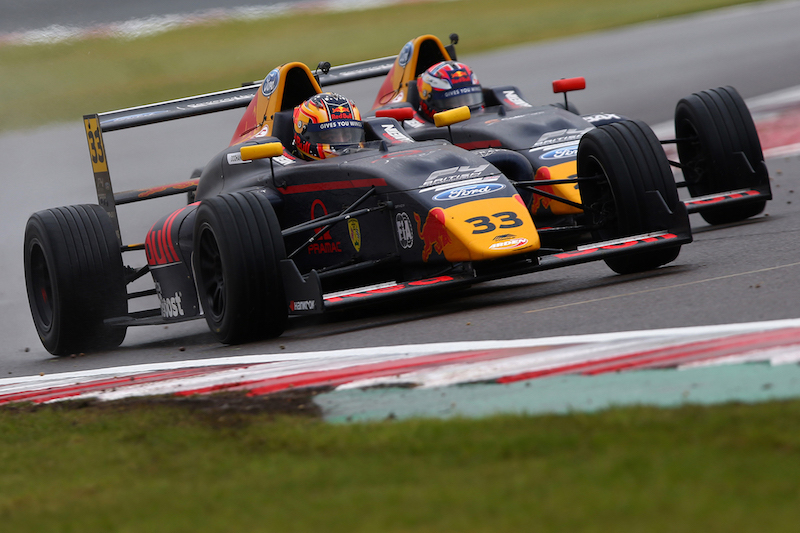 Two Red Bull cars are winning races and fighting one another for a title this year. It may be not be Formula 1, but Ida Wood thinks their British Formula 4 battle is still worth a watch.

Although the 2019 Toro Rosso line-up may be filled by a driver outside of Red Bull’s books, the future of the Red Bull Junior Team is looking strong. More than that, two of the drivers are already learning what it’s like to be be in a title fight, as team-mates.

Jack Doohan and Dennis Hauger were signed by Helmut Marko late last year while still in karts, and after turning 15 at the start of the year were placed into British Formula 4 with Arden, a team that has run Red Bull juniors many times before.

After 24 races they sit fourth and third in the championship, separated by just 24 points. Both have won races, and are closely tied in the battle for the rookie crown.

Doohan is the son of motorcycling legend five-time MotoGP champion Mick, and has been driving machinery for as long as he can remember. However, F4 wasn’t on his radar this year, having come third in the European junior karting championship in 2017 – his first full season outside of Australia.

“We weren’t planning to do F4 this year, and then when I got into the Junior Team they placed us in, and I was a couple steps behind everyone else,” Doohan explains to Formula Scout.

Self-funded races in Italian and ADAC F4 have brought Doohan on to an “equal” level with his rivals, some of whom are in their third season in cars.

“Since the first test at the [Rockingham] media day, I’ve progressed to a whole new level really. That test day we had a lot to work on, and I think after doing the couple of races, and then I got my first win, we tested here for a second time, and I was really strong.

“I picked that mileage up [by racing abroad], and then we were on the pace. Just little bits everywhere, every corner. Half a tenth, half a tenth, building up to make a big difference. I think I’m in a good position with the car now.”

Doohan is also in a good position in the standings, even though compatriot Luis Leeds was dropped by Red Bull after finishing third in his one season in the category.

“To be honest I don’t know [if Marko is impressed]. I haven’t been speaking to him much lately. But I’ll just keep on doing the best I can. If I do that, it should be good enough. If not, then I tried my hardest.”

On Marko, Hauger adds: “He is a man who knows everything but doesn’t say too much. So I just have to focus on driving and then he will see the results and I’ll hopefully get what I want afterwards.”

With access to both Arden and Red Bull’s resources, including static and motion simulators, a lot of learning has also taken place off track. On Red Bull’s part, prepping the simulator for two drivers in the same car has made their input more efficient.

The last time Red Bull ran two of its juniors in the same team was in 2013, when Daniil Kvyat and Carlos Sainz Jr were GP3 team-mates at Arden, a pairing that previously worked in Formula BMW and Formula Renault. Doohan’s potential long-term rival Hauger is currently ahead of him in the standings.

“Dennis is very good,” says Doohan. “I don’t think one of us is stronger than the other. He’s fast everywhere, so is a very good reference. Patrik [Pasma] as well. After the summer break he’s been very fast. So to have his data, it’s been very good to see the strengths that he’s built on.

“Arden has four drivers that can fight for wins, so if you’re beating your team-mates you’re on the pace. I want to win as many races as possible and win the title. Just doing it race-by-race, and we’ll see where we are.”

“We are both top four in the championship and fighting for wins, so it’s just about being consistent up there and not thinking about your team-mate too much when you’re up there. I think it’s more important that you focus on yourself and believe in yourself,” is Hauger’s answer.

Norway’s Hauger came to cars after winning back-to-back German karting championships at junior and senior level in 2016-17. He is similarly confident that the title remains within reach, and is only bettered on wins by championship leader Kiern Jewiss, who is a single-seater rookie but did already know all of the circuits.

“It’s been a mixed year so far. A few ups and downs. Early on we were a bit unlucky and I lost points because of that. But I think the progression through the season has been really good. I’m learning every race, so I think it’s been a good year learning-wise, especially on how the racing is and how to fight in a car, rather than a kart, as they’re quite different.

“We’re catching up on the leader in the last few rounds, so it’s possible to catch up before Brands Hatch [the season finale]. I need to be consistently up there and score as many points as I can compared to the two guys in front in the championship.”

The easiest, and worst way to throw away points is by crashing into your team-mate, and the two did just that at Rockingham. Approaching the Deene hairpin, team-mate Pasma made a small lock up in front, and hesitation from Hauger behind led to him colliding with Doohan, who was coming in from a wider angle. Both retired, and Hauger was quick to own up to the “stupid error” that caused the crash.

Despite losing crucial ground in the championship, the acceptance of blame and forward-facing attitude of both drivers afterwards was a positive sign. If they can avoid a repeat of that incident again, then the future looks bright for the two teenagers. 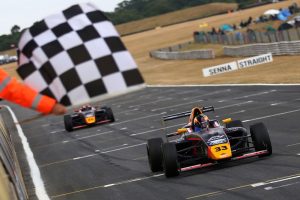