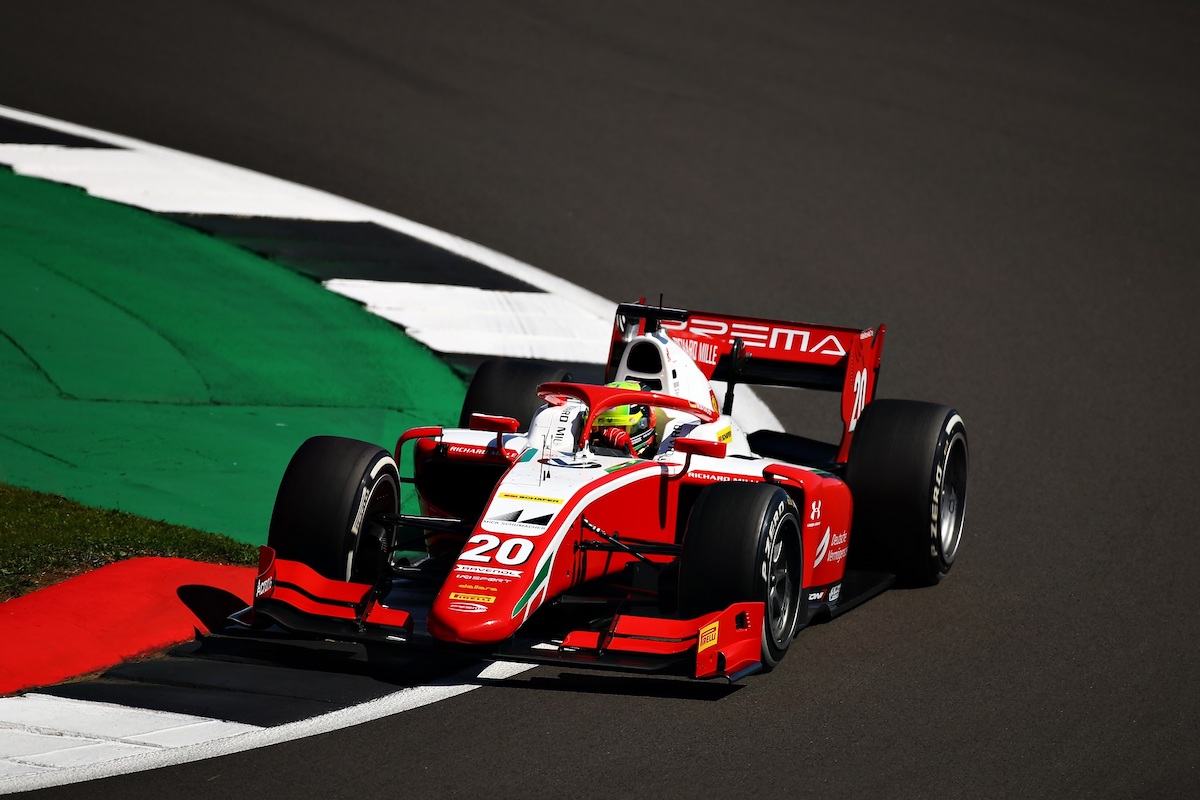 Mick Schumacher has responded following his late-race Formula 2 collision at Silverstone with Prema team-mate and fellow Ferrari junior Robert Shwartzman that cost both a chance of victory.

Shwartzman and Schumacher led Sunday’s sprint race from the front row while also under pressure from Carlin’s Yuki Tsunoda.

Schumacher made a small mistake at Brooklands early in the race and dropped back from Shwartzman, but he was able to close back up and tried a move around the outside of the corner late into the race. The pair made contact.

While Schumacher was able to continue, Shwartzman damaged his front wing in the collision and dropped down the order. The stewards deemed it a racing incident.

Speaking in the post-race press conference, Schumacher explained his side of the accident.

“You never want to collide with your team-mate, that’s the last thing you want to do,” he said. “In this case obviously it is very hard to judge distances in the cockpit, especially with the mirrors that we have. They have a very rounded shape, so it is quite difficult to judge how far the opponents are behind or whatever.

“In this case, I have to see the outboard [footage] and see how it was and then take further discussions with the team. Obviously I’m very apologetic if I did something wrong, and in case I did then I really apologise.

“P1 was easily possible in this case. I think the tyre management we had and the car itself that Prema gave me was amazing.”

Schumacher also explained that with both Prema cars starting from the front row, there were discussions within the team about on-track engagement.

“Racing as team-mates, it’s always important to give each other room. Nevertheless we are always fighting for positions and points. Therefore, we said “OK, keep distances and keep calm”. Obviously he was fading quickly and therefore the incident is a bit unclear to me who’s at fault.

“I have to see the video again, see the outboard and then take further discussions with the team from then on.

“In general, this track is a very high-speed track, which means that tyre degradation and following is very difficult to manage. So the moment that you spend a bit too long behind someone, the tyre will degrade really quickly. I got a very good exit and mainly a very good entry into Turn 3 and into Turn 4, which gave me the opportunity with the DRS to get alongside.

“I think that probably would have been one of the only options that I had without losing too much ground after that because obviously every fight takes out tyre life and I think especially here more than at any other track, so definitely something to consider.”