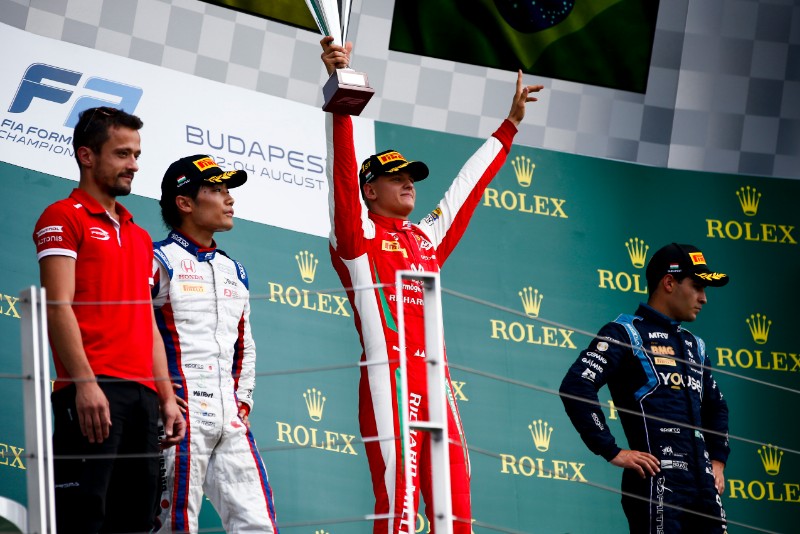 Reigning European Formula 3 champion Schumacher had yet to stand on the F2 podium prior to the reversed grid race, which he started from pole.

Carlin’s Matsushita launched from second on the grid and immediately challenged Prema driver Schumacher around the outside of Turn 1, but his attack was repelled.

Settling into second place, Matsushita was rarely more than a second behind the leader, only once falling outside of two seconds adrift after having to fend off DAMS’ Sergio Sette Camara.

He closing to within a half-second on the penultimate lap, but Schumacher had it under control for a lights-to-flag victory.

Camara finished third after slipped adrift of the lead battle following his mid-race attack on Matsushita. The Brazilian boldly dived to the inside of Matsushita at Turn 1 but ran wide on the exit, allowing the Carlin racer to retain second.

The Virtousi driver slipped down to ninth, and spent several laps staring at Nikita Mazepin’s rear wing, as the ART Grand Prix driver climbed fourth places at the start. Mazepin eventually struggled with tyre degradation and Ghiotto squeezed him onto the grass en route to Turn 2 to seize eighth place and the final point.

Ghiotto finished behind both his title rivals, with championship leader Nyck de Vries extending his advantage to 30 points over Nicholas Latifi as the pair finished sixth and seventh. Latifi pressured de Vried throughout the race, albeit unable to make an overtake attempt.

Guanyu Zhou and Callum Ilott rounded out the top 10 for Virtuosi and Sauber Junior Team by Charouz respectively.

Arden’s Anthoine Hubert danced around the outside of Giuliano Alesi at Turn 2 in the closing stages to grab 11th place after the two had both demoted Mazepin at the previous corner. Mazepin slipped back to finish 15th. Hubert’s team-mate Tatiana Calderon was the only retirement in the race, after wheel-to-wheel contact with Arjun Maini caused her suspension damage.