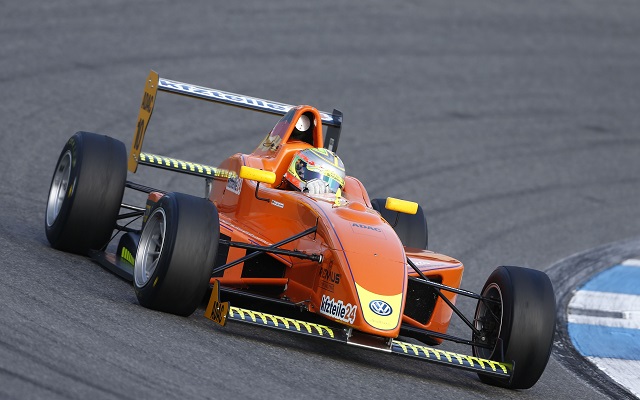 Kim-Luis Schramm will return to ADAC Formel Masters in 2014 for his sophomore season with Mucke Motorsport.

The 16-year-old Schramm stepped up to single-seaters last year after a successful karting career. He put together a consistent rookie season in ADAC, which included a maiden podium finish at the Red Bull Ring, and ended up 14th in the overall standings.

“I learned a lot this past year. My Team kfzteile24 Mucke Motorsport gave me all the support and encouragement I need to push forward ? from mechanics over the racing engineers to team manager Peter Mucke. I intend to pay back all the trust and work invested in me by achieving excellent results. I can?t wait to be back in the racing car and start the season. We?ll know exactly where we are then,” said Schramm.

“Kim-Luis gained invaluable experience as ADAC Formula Masters rookie this past year. His steady progression from one race to the next were evident with the podium place and further good placements”, stated team boss Peter Mucke. ?Having seen him in this year?s first trials, we can be confident that Kim-Luis will be capable to step onto the podium more often this season. We are looking forward to continuing the work with him and hope for a successful season for him and our entire team.”