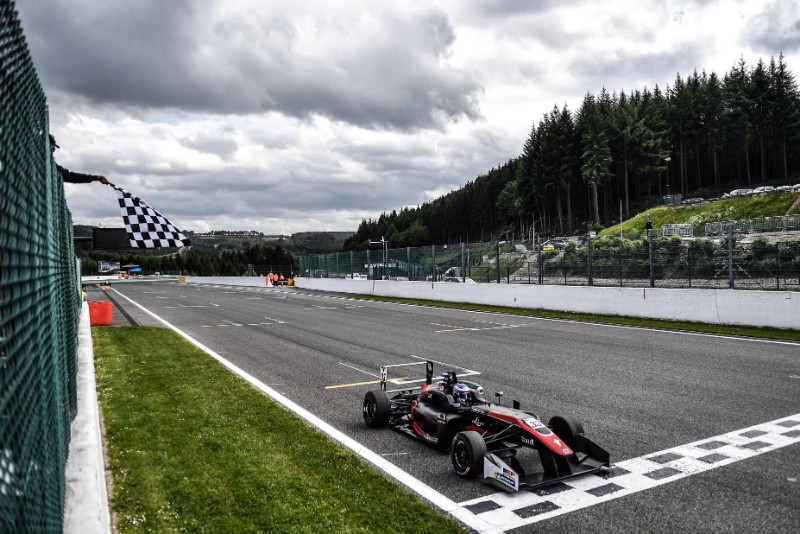 Marino Sato extended his Euroformula Open championship lead with his fourth win of the season at Spa-Francorchamps, as his Motopark team-mates collided.

Liam Lawson and Yuki Tsunoda, both Red Bull juniors, had made their way past Sato by the third lap of the race, with Lawson claiming the lead from fifth on the grid. He lost that position to Tsunoda at the beginning of the Kemmel Straight, and tried reclaiming it as the pair entered Les Combes.

Tsunoda chose the inside line, with Lawson attempting to sweep around the outside. There wasn?t the expected grip there though, pitching Lawson onto the kerbs and then into his team-mate as he tried to control his car. Both ended up in the barriers, and Sato reclaimed the lead.

After expertly judging a safety car restart, a result of the crash, Sato pulled away to take victory by 6.214 seconds.

Teo Mart?n Motorsport?s Lukas Dunner finished second, taking the position after a superb around-the-outside move at Les Combes on Double R Racing?s Jack Doohan. Doohan then lost another place to Motopark?s Julian Hanses before the end of the race.

Christian Hahn and Teppei Natori finished fifth and sixth for Carlin, ahead of Doohan?s team-mate Linus Lundqvist. On the opening lap, Lundqvist had been pitched onto two wheels by RP Motorsport?s Javier Gonzalez and fell to the back of the order. After the safety car restart he was rapid, despite significant floor damage, and overtook over 10 cars to climb back up the order.

Gonzalez ended up finishing behind him in eighth, ahead of Fortec Motorsports? Calan Williams and the second RP Motorsport car of Pierre-Louis Chovet.

Gearbox problems for CF Racing?s Stefano Leaney meant his race was over as soon as it began, while Williams? team-mate Cameron Das finished a lap down after failing to get off the line. Teo Mart?n?s Guilherme Samaia also ended up lapped after missing his braking point at the final chicane late on.