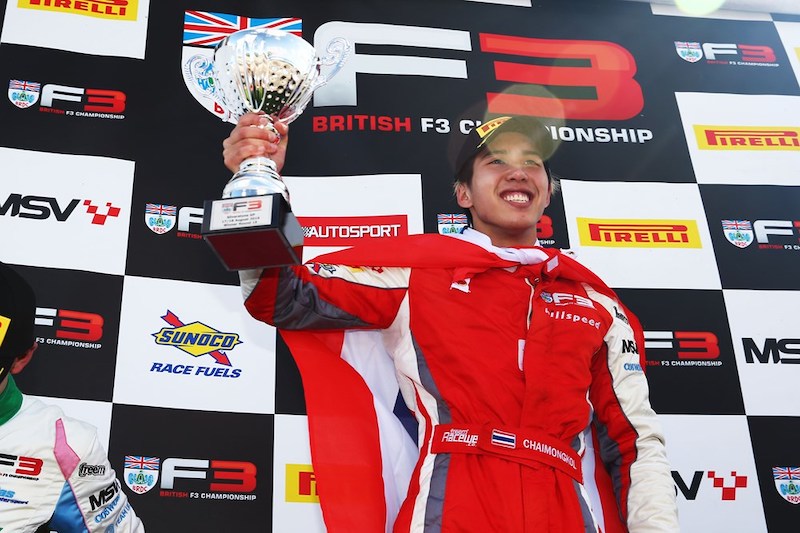 Sasakorn Chaimongkol has secured a deal to contest a third season in BRDC British Formula 3 with Hillspeed.

The Thai racer first joined the team in the series’ Autumn Trophy in 2016, claiming a best finish of sixth, and returned for a full campaign in the main series two years later.

He claimed two podiums and was ninth in the points, which he improved on last year by claiming his first win at Silverstone and coming eighth in the standings. Chaimongkol is now the ninth highest-scoring driver in BRDC British F3 history.

“It’s great to come back to British F3 and work with Hillspeed again, we’ve established a fantastic relationship over the last few years and we proved last year we can win in this championship,” said Chaimongkol.

“I’m very grateful to everyone who has been working so hard to make this deal happen, not least my manager John Kirkpatrick and Richard and Morgan [Ollerenshaw] at the team.

“Even though we’ll be going into the new season on the back foot compared to everyone else who has had the budget to go testing, I know we can hit the ground running and mount a really strong challenge.”

The 20-year-old has not been in a racing car since the end of 2019 season, and his first track time in the series’ updated car will come in free practice for next weekend’s Oulton Park season opener.

Hillspeed team principal Richard Ollerenshaw said: “We’re absolutely delighted Cutter is back with us for the new season.

“It’s been a long slog to get the budget together, and if it wasn’t for Cutter’s long-term sponsor MAXIMA Oils he would have been spending 2020 on the sidelines which would have been a travesty.

“It’s unfortunate he hasn’t been able to test, but we know what he’s capable of and we’re all aiming for big things this season.”

“We’re making a real push now to fill our third seat, it’d be fantastic to complete a capacity line-up and we’d be delighted to speak to anyone looking for a cost-effective drive in the UK’s top single-seater championship – whether for the full season or selected rounds.”