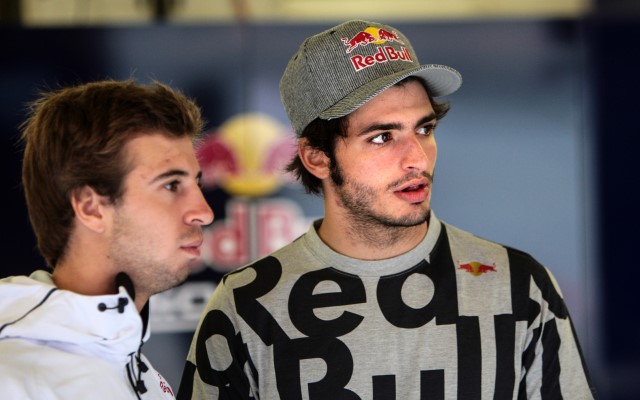 Carlos Sainz took victory in the two MSV F3 Cup races at Snetterton last weekend as he and two other top drivers participated to qualify for the Macau Grand Prix.

The Spaniard was joined by fellow Red Bull Junior Antonio Felix da Costa and?Lotus protege Esteban Ocon as they all ensured that they met the requirement of taking part in an F3 race this year.

Sainz and Felix da Costa lined up with their team Carlin, with the former in an older F308 and the latter in the latest-spec F312 model.

Taking part in the Invitational Class, Sainz edged out Felix da Costa by one hundredth of a second to top qualifying.

He kept hold of the lead at the start of the first race and then edged away, with his car’s lower downforce configuration giving him an advantage on the straights. Backing off on the last lap, he won by 0.589 seconds.

Ocon – driving an F305 for Lanan Racing in his first ever F3 race – finished just over 30 seconds behind in third place.

Felix da Costa (who took a double win in the same round last year) was stranded on the line at the start of race two by and overheating clutch, and was collected by drivers behind. That allowed Sainz to take a 32 second win.