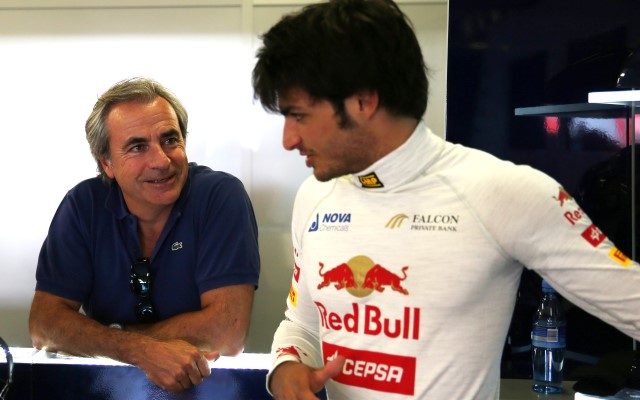 Carlos Sainz starred on his Formula 1 testing debut at the young driver test at Silverstone, rivalling race driver Daniel Ricciardo at the head of the timesheets.

Ricciardo spent the morning in the Toro Rosso, posting a time of 1m32.972s that would end up being the best lap of the day. He switched to the Red Bull RB9 for the afternoon as the champion squad evaluate him for a race seat, allowing Sainz to get behind the wheel of Toro Rosso’s STR8.

The 18-year-old Spaniard’s best time was good enough for second place on the leaderboard at the end of the day, just 0.044 seconds slower than Ricciardo’s time set in the same car.

Ricciardo’s name also showed up in third at the close of play thanks to his quickest time in a Red Bull machine that he did manage to beech in the Luffield gravel trap early into his run.

Away from Red Bull-contracted drivers, GP2 champion Davide Valsecchi was fourth on his one day of running for Lotus, 0.582s off the pace. He was three tenths ahead of his former GP2 team-mate Oliver Turvey of McLaren.

James Calado enjoyed a second morning driving the Force India, managing a time that put him sixth at the end of the day, just one thousandth of a second ahead of Antonio Felix da Costa, who got the last of his day and a half in the Red Bull before he sets off for this weekend’s Formula Renault 3.5 round in Spielberg.

Ferrari tester Davide Rigon was eighth, ahead of race drivers Pastor Maldonado, who spent the morning doing tyre work for Williams, and Nico Hulkenberg, who did likewise in the afternoon for Sauber.

European F3 champion Daniel Juncadella got an extra afternoon in the Williams and was 11th, ahead of FR3.5 champion Robin Frijns who did the last of his running this week for Sauber during the morning before Hulkenberg took over, but did cause a red flag with an off at Luffield of his own.

FR3.5 frontrunner Will Stevens was 13th on his first day in an F1 car for Caterham, clocking the most laps of the non-race-drivers with 98, while Paul Di Resta ended up 14th after tyre work with Force India in the afternoon. Marussia’s Rodolfo Gonzalez completed the day’s runners.

Matthew Solomon set to join Prema for Misano round