written by Valentin Khorounzhiy 31 May 2014 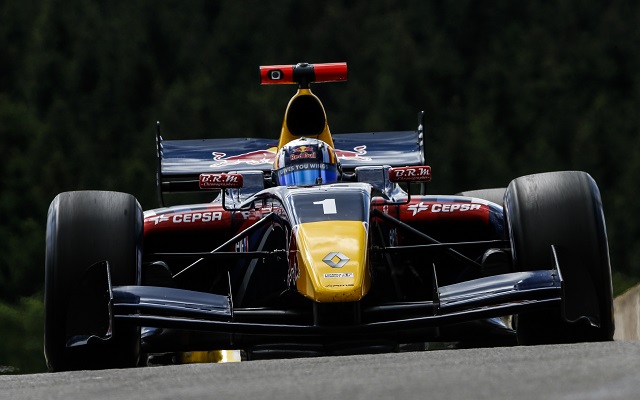 Red Bull junior driver Carlos Sainz was untouchable in the first race of the fourth Formula Renault 3.5 round at Spa, leading from lights to flag.

After the initial start was aborted due to an issue with the starting lights, Sainz stormed off the line during the proper start and managed to immediately pull out a huge gap over the rest of the field.

Fellow Red Bull youngster Pierre Gasly had a somewhat sluggish getaway from the front row but managed to maintain second into turn one.

The race leader’s advantage would soon be rendered void as there was a huge crash in Les Combes that brought out the safety car.

The incident was kicked off when Richie Stanaway and Roberto Merhi went into turn eight side by side, with the Kiwi forcing the Zeta Corse driver off-track. The two ended up colliding, with Stanaway then tagging Sergey Sirotkin, who went into the barriers at a high speed, but was thankfully unhurt. Zoel Amberg was also caught up in the accident, having had little chance to avoid a sideways Merhi.

At the restart, Sainz kept the lead from Gasly and managed to gradually increase his advantage over the Frenchman during the subsequent laps. Gasly himself was under pressure from third-placed Matias Laine as the field somewhat bunched up behind the Frenchman.

Pietro Fantin was running in fourth early on after the restart, but was soon overtaken by Norman Nato, before spinning out of the race at Les Combes after apparent contact with Meindert van Buuren.

Out front, Sainz was pulling around a second a lap on Gasly, eventually putting his win beyond any doubt. Gasly’s race in second was made easier as Nato put pressure on Laine for much of the distance.

Surprisingly, neither of them would get to stand on the podium as Jazeman Jaafar found his way past Nato for fourth and then overtook Laine to take his second consecutive third place.

Sainz crossed the line a whopping 17 seconds ahead of his fellow Red Bull Junior Team member with Jaafar finishing ahead of Laine and Nato.

Luca Ghiotto overtook Marco Sorensen for sixth in the closing laps after Sorensen locked up out of turn one and allowed the Italian to go side by side into Eau Rouge. The Dane had his line compromised and was then also passed by Will Stevens on the Kemmel straight, settling for eight place.

Marlon Stockinger finished ninth, while Beitske Visser overtook Roman Mavlanov to pick up her first point in the series in tenth.

Title contender Oliver Rowland had a miserable race, first being stuck amidst the aftermath of the lap one incident and then having his car fail on him while fighting back through the field.