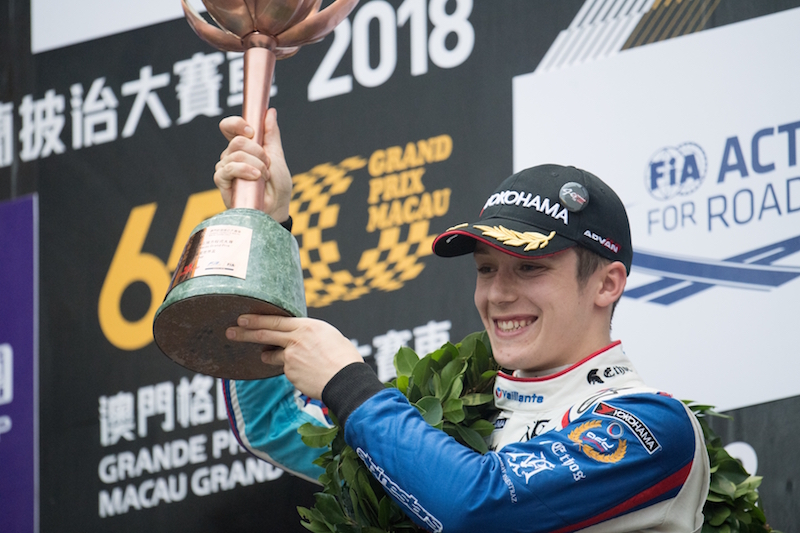 Macau Grand Prix podium finisher Sacha Fenestraz has lost his place on the Renault Sport Academy and is looking to Japan for his next step.

The Franco-Argentine driver earned a place on the programme for 2018 after winning last year’s Formula Renault Eurocup title, and won on his first appearance in the marque’s colours in the opening European Formula 3 round in Pau.

He experienced a tough season thereafter however in a difficult campaign for the Carlin team, ending the year 11th in the standings, but?did finish third in the Macau Grand Prix last month.

“It’s true that from time to time I made a couple of mistakes on my part, but in general I think I did the best I could with what I had,” Fenestraz told?Motorsport.com.

“So I realised that it was going to be complicated and I could not reach that goal.”

Having raced in the final two rounds of the GP3 season, Fenestraz had been linked with a drive in the new FIA F3 Championship.

However, a move to Japan now looks likely, and he will test in Japanese F3 this week with the B-Max/Motopark partnership.

His manager Fraser Sheader of ADD told Autosport:??It?s definitely an option for next year. Sacha?s in a great place right now ? he?s got some really nice options and Japan is one of them.

?If we went to Japan it would definitely be with a multi-year intention. We wouldn?t want to try to run before we could walk, so initially it would be doing F3 and doing it well, and having Super Formula and Super GT very much at the front of our minds for the future.?

Among the other drivers taking part in this week’s test at Suzuka is Callum Ilott.

The Ferrari-supported Briton is hoping to move up from GP3 to Formula 2 for 2019, but will test for the Okayama International Racing Circuit team of his Carlin Macau team-mate Yoshiaki Katayama.

He will share his car with James Pull, who raced for Carlin in BRDC British F3 last year before moving into Lamborghini Super Trofeo.