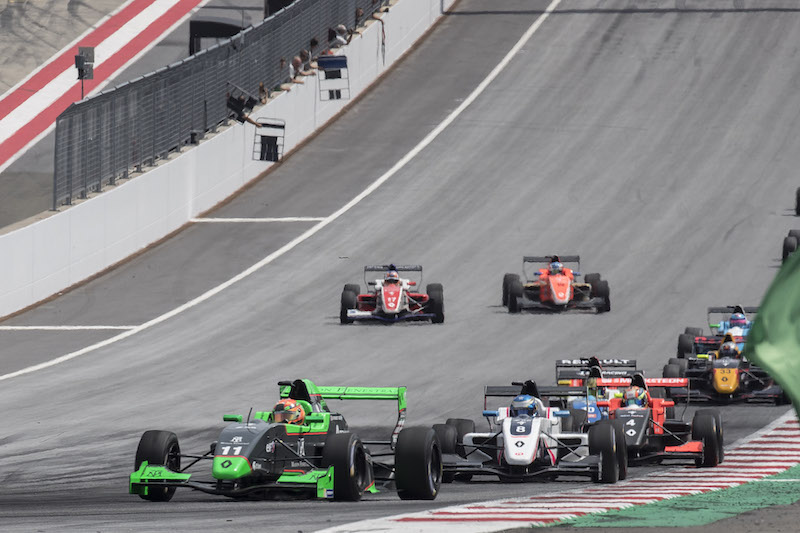 The Franco-Argentine kept the lead from pole position at the start, while behind, Will Palmer grabbed second when Gabriel Aubry locked up and forced himself and Max Defourny wide at Turn 3.

Fenestraz led by three seconds after as many laps, and he was four seconds clear when the safety car first came out with 14 of the 25 minutes remaining after Presley Martono and Axel Matus came together over 15th place at Turn 4.

He handled the restart well, immediately building a one-second margin, but there was less than two laps of green-flag racing before the safety car returned after Thomas Maxwell was spun around at Turn 3.

At the restart with less than three minutes to go, Fenestraz once again went clear by over a second, with 1.2s his final winning margin over Palmer, who is now 29 points adrift having failed to score in race one.

Robert Shwartzman is only two points ahead of Palmer after he could only finish ninth, despite having moved past Defourny for fourth place on lap two.

His race fell apart at the first restart when he was attacked by race one winner Max Fewtrell.

After failing to hang on to the position around the outside of Turn 6, Shwartzman went wide in Turn 7 and was passed by Dan Ticktum, Defourny and Thomas Randle.

He lost more ground at the second restart, with Richard Verschoor diving past at Turn 1 and Yifei Ye also getting a run on him to relegate him to 10th.

He did gain one place when Verschoor went off on the last lap after tagging Randle as he tried to pass his former Toyota Racing Series rival into Turn 4.

Just before that, Defourny had re-passed Ticktum for fifth place, but unseen drama at the final corner caused the Belgian to drop to eighth behind Randle and Ye.