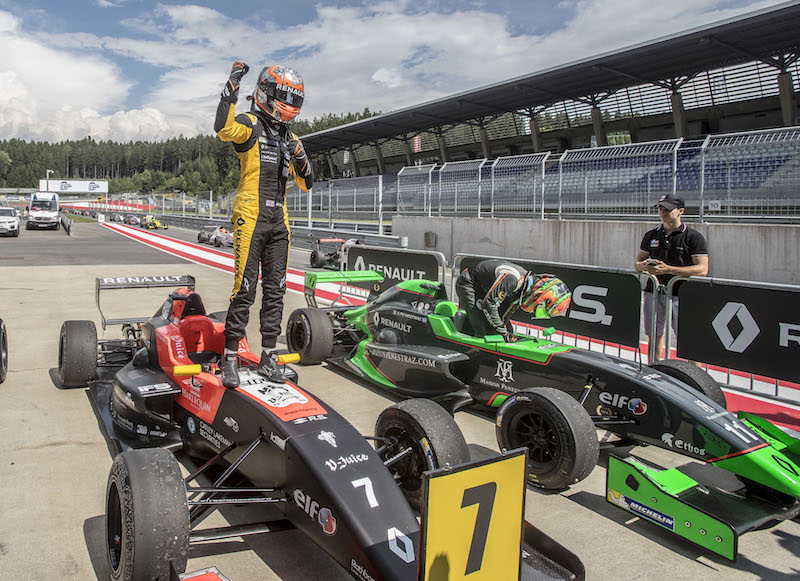 Max Fewtrell scored his maiden Formula Renault Eurocup win in race one at the Red Bull Ring, while Sacha Fenestraz took the points lead as rivals Robert Shwartzman and Will Palmer collided.

After qualifying on the front row for the first time, Fewtrell grabbed the lead on the inside of Defourny at the first corner to set him up for his maiden victory.

For much of the 25-minute race, Fewtrell led Defourny by around a second, but that advantage suddenly came down with just over five minutes to go.

In search of his first win of the season, Defourny got down the inside of Fewtrell at Turn 3, but the Briton regained the lead on the exit.

They went close again on the penultimate lap, but for the second year in a row Defourny would be denied in a battle with the reigning British Formula 4 champion at the Red Bull Ring, after his classic duel with Lando Norris 12 months ago.

He wouldn’t get to finish second however, as Fenestraz passed him on the final lap in a move that began on the run into Turn 4 and was completed around the outside of Turn 6.

The Franco-Argentine was already on course to claim the points lead, and is now 12 points clear after a bad race for his rivals Shwartzman and Palmer, who collided on lap four.

Palmer started and ran fourth early on behind Fenestraz, but he ran wide through the penultimate corner on lap three and Dan Ticktum took his chance to dive down the inside into the final turn.

This allowed Shwartzman to get alongside his R-ace GP team-mate along the pit straight, and he edged ahead on the racing line into Turn 1.

With Ticktum appearing to slow mid-corner however, Shwartzman was hit from behind by Palmer, with the Briton sustaining damage to his nose and front wing.

Regardless, Shwartzman immediately got alongside Ticktum, only to be edged onto the grass, which allowed Thomas Randle past on the uphill run to Turn 3.

There, Palmer tried to fight back on the outside but was edged wide and down the order, before Shwartzman had a go back on Randle, nosing ahead into Turn 4 but running too deep falling to seventh below Aubry.

Palmer was quickly pushed outside of the top 10 behind Gabriel Chaves, Yifei Ye and Richard Verschoor, and with his damage he dropped over 10 seconds behind that group, eventually being passed for 11th by Alexey Korneev.

Thomas Maxwell was also hounding him into the final corners, and when he backed off into the last turn due to yellow flags for the spun car of his compatriot Zane Goddard, Jarno Opmeer dived down the inside, triggering an investigation.

Alex Peroni also edged ahead of Maxwell on the run to the line as he recovered from spinning out of eighth place at Turn 1.

Update:?Ticktum was handed a 10-second penalty for his defence on Shwartzman, relegating him to ninth place.