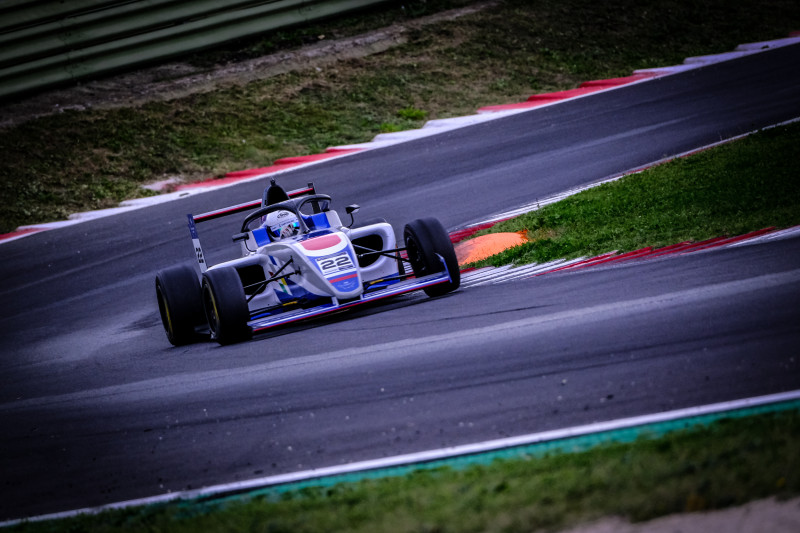 The damp track caught out numerous drivers, and there were four red flag stoppages that prevented lap times from being set until late on.

Malaysia, Kuwait and Hong Kong were the first to spin off, with Kuwait’s Mohammed Al Nusif causing the first stop to the session after getting beached in the Turn 8 gravel.

The clock reset when the session was restarted, with Al Nusif quickly spinning again three times. Australia’s Luis Leeds was just about to set the first timed lap of the session when Hung spun off and caused the session to be stopped for a second time.

Brazil’s Joao Rosate ended up being the first driver to set a lap a long time later, but he was quickly shuffled down the order by the more experienced drivers.

Euroformula Open driver Ido Cohen set the pace for Israel, and improved multiple times at the front before Portugal’s Mariano Pires ended up in the gravel and caused another stoppage.

A ultimately harmless spin prevented Cohen from setting an even quicker lap during the time, and when the session restarted for a final time the track was already drier.

Cohen broke into the 1m49s, but it was Bulantsev who caught the track at an drier point and went almost half a second quicker. There was still one minute to go, and time for further improvements, when Hung spun again and qualifying was red flagged for a final time.

Italy’s free practice pacesetter Andrea Rosso, Germany’s Niklas Krutten and Leeds completed the top five, all within a second of Bulantsev, while the order below was far more spread as drivers frequently had their best laps ruined by the stoppages or their own mistakes.