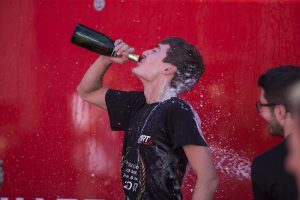 Russell made one of the only overtakes of the race on the first lap, demoting ART Grand Prix team-mate and chief title rival Jack Aitken to seventh at Turn 6.

Over the next few laps he set several fastest laps, and gaining the two points that come with it, before lifting off and nursing his tyres.

With four laps to go a crash between Red Bull juniors Niko Kari and Dan Ticktum brought out the safety car, and promoted Russell to fourth.

With Aitken slipping behind feature race winner Nirei Fukuzumi shortly after being passed by Russell, the points gap between the top two increased to 50, enough to put the title out of Aitken?s reach.

Another celebrating come the end of the race was Lorandi, who took his first car racing win since the 2016 Pau Grand Prix.

The Italian kept out of reach of Dorian Boccolacci for the duration of the race, although the race lead was rarely anything greater than three quarters of a second.

Kari looked set to take his second podium of the season until the stewards awarded him a 10 second penalty for colliding with Ticktum.

At the end of lap 13 Ticktum got close to Kari, and looked around the outside of his Red Bull stablemate at Turn 1 on the following lap.

At the exit of the corner Ticktum tucked in and had the inside line for Turn 2 despite some choppy defence from Kari on the short straight between the two corners.

Ticktum used up all the available track through Turn 2, leading to Kari going off track on the exit, skittering across the kerbs and re-entering at Turn 4.

He came back on track in the path of Ticktum, and the side-on impact pitched the British driver into the gravel.

ART driver Anthoine Hubert almost made it three wide as the crash happened, and although he tucked behind Kari afterwards he was awarded the final podium spot.

Behind the four ART cars was Giuliano Alesi, who spent most of the race pressuring Aitken, and Tatiana Calderon.

Alesi is also the last of the four drivers who will be fighting it out for second place in the standings at Abu Dhabi in November. A 41 point gap covers ART trio Aitken, Fukuzumi, Hubert and Trident driver Alesi, with 48 available over the two races. 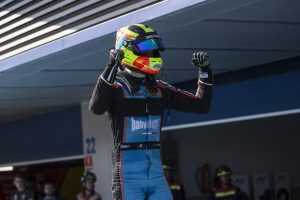