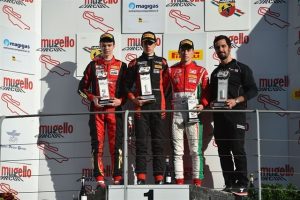 Sebastian Fernandez completed a successful trip to Mugello with his second win of the weekend and fifth of the Italian Formula 4 season in race three.

The Venezuelan started fourth on the grid, behind Marcus Armstrong, Job van Uitert and Leonardo Lorandi.

Van Uitert challenged Armstrong for the lead at the start, but approaching halfway distance it was Fernandez who was applying the pressure from second place.

On lap eight of 16 Fernandez made his move, and a lap later Armstrong was demoted to third by Artem Petrov.

The Russian chased down the leader but could not find a way past, and also had a five second penalty for jumping a safety car restart early in the race.

The pace the front two had meant Petrov was still secure in second though, and Armstrong himself had over six seconds in hand over Rookie class winner Lorandi.

Enzo Fittipaldi finished fifth ahead of Kush Maini, before he too was handed a time penalty and Aldo Festante inherited the position.

Lorenzo Colombo, Lirim Zendeli, Giorgio Carrara and Olli Caldwell rounded out the points, with seventh place for Colombo knocking him out of title contention.

Armstrong now has one hand on the title, after van Uitert, the only man who can beat him to the title, finished outside of the points.

The Dutch driver ran in second early in the race, and a lap after being demoted by Fernandez he served a drive-through penalty for jumping the start. He dropped to 19th, and found his way back up to 15th thanks to Maini?s penalty, but is now 53 points behind with 75 available at the Monza finale.

The safety car was caused by a spectacular crash for DRZ Benelli driver Ian Rodriguez in which he was uninjured.