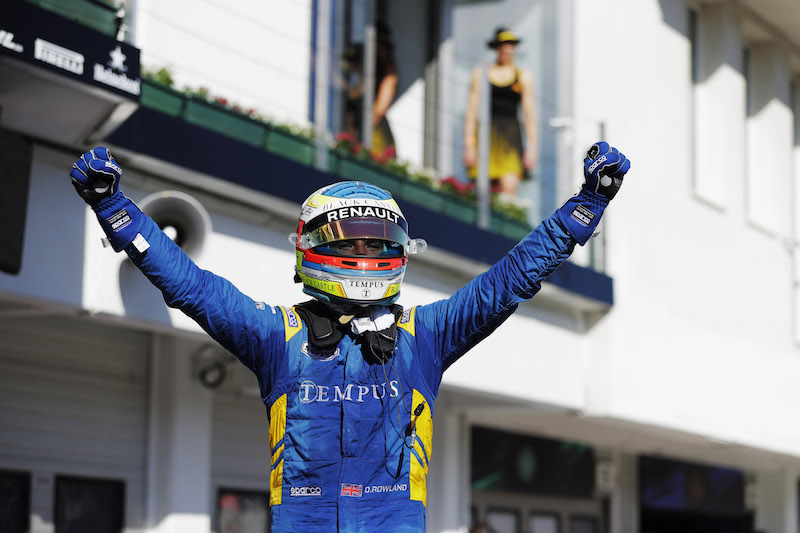 Oliver Rowland took victory in the Formula 2 feature race despite losing out to Artem Markelov at the start of the race, with Charles Leclerc charging from the back of the field to fourth.

At the start, Markelov got a better start than Rowland and, despite the latter?s attempts at defending the position, took the lead heading into Turn 1.

Markelov would keep the lead until the pit stops, where a slower stop than Rowland?s would allow the DAMS driver to pass the Russian Time driver.

Meanwhile, Leclerc had started making his way through the field and was running 11th?after lap one ? after passing six cars on the outside of Turn 1 and then Ralph Boschung towards the end of the lap.

The Monegasque driver would find himself behind Sergio Canamasas until the pit stop window, with Canamasas pitting on lap nine.

After the leaders had pitted on laps 10 and 11, Leclerc found himself in second place and behind his GP3 teammate Alex Albon.

Albon fought Leclerc hard and, despite Leclerc?s attempt at going around the outside of Turn 4, Albon kept Leclerc behind until Lap 15.

Within a few laps, Rowland had started to get his tyres working and passed Sergio Sette Camara and Albon to move into second, with the gap between Leclerc and Rowland a little over five seconds.

Rowland continued to close on Leclerc until he pitted on Lap 22, re-joining the race in 13th?place.

It had started to look like that Rowland?s strategy, going from soft tyres to medium, would be the optimal strategy.

But a collision between Canamasas and Robert Visoiu brought out the safety car on lap 25. It was brought in again two laps later and Leclerc, on the option tyre, overtook three cars on the run between Turns 1 and 2.

At the front, Rowland led from Markelov and Latifi. With three laps left, Rowland defended hard down the pit straight from Markelov who was looking to pass for the lead.

Markeov ended up bouncing across the grass on the inside of the track, before hitting the tyre barriers on the exit of Turn 1. The incident was placed under investigation by the stewards, and brought out a safety car which the race ended under.

Not long before the safety car was deployed, Leclerc made his final move of the day. He passed Nobuhara Matsushita for fourth place.

Ghiotto came home sixth, with Nato ? who started from the pit lane ? seventh and Albon, Sean Gelael and debutant Santino Ferruci all finishing in the points.