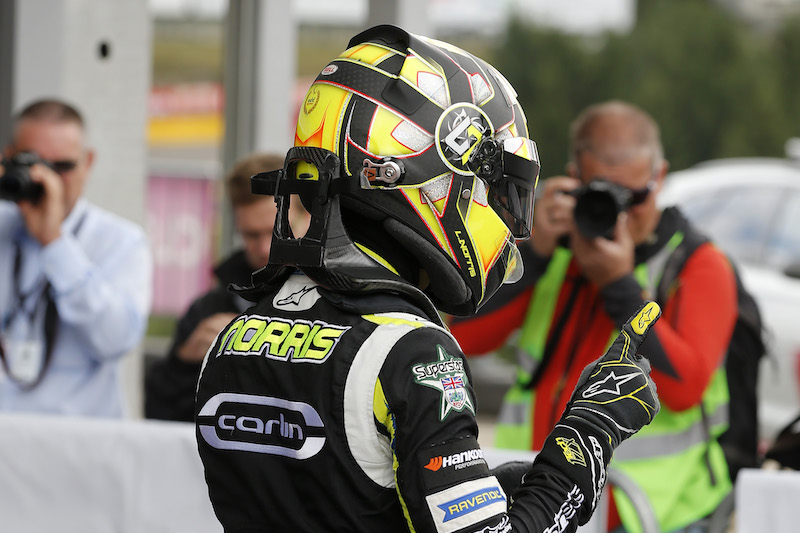 Lando Norris recovered from a grid penalty to win the third and final Formula 3 European Championship race at Spa-Francorchamps, as Maximilian Gunther lost much of his points advantage in a crash.

Norris had been denied his third and final pole position of the weekend when he was handed a three-place grid penalty for causing the contact that took both he and Guan Yu Zhou out at the start of race two.

Come the same point – Les Combes – in the third race, Norris was already challenging Gunther for second place behind Zhou, with all three having swept past pole-sitter Callum Ilott down the Kemmel Straight.

Norris took second away from Gunther on lap two and was closing on leader Zhou after two further laps when Gunther – already demoted to fourth by Ilott – clashed with Hughes down the Kemmel Straight.

Hughes had already got the front of his car alongside Gunther’s as they came onto the straight but wasn’t given a car’s width of room on the left-hand side of the circuit, meaning his front-right wheel made contact with Gunther’s rear-left, sending the German spinning hard into the barriers on the left and triggering a safety car.

At the restart five minutes later, Norris slipstreamed his way past Zhou down the Kemmel Straight and opened up an advantage of over a second before Ilott also passed Zhou with around 12 minutes to go.

Ilott couldn’t challenge Norris however and the Carlin driver increased his margin to 2.4s on the way to his five win of the year, and his first double.

He cuts Gunther’s points lead from 43 to 18, and Joel Eriksson is only eight points further behind after repeating his race-two charge to second from a lowly grid position (in this case 10th).

A lap after Ilott passed Zhou, he also passed the Chinese driver, then soon passed Ilott as well.

On the final lap, Zhou came back to deny Ilott a podium finish.

Jehan Daruvala was fifth ahead of race two Ferdinand Habsburg, who won a battle with Ralf Aron. Mick Schumacher, Harrison Newey and Joey Mawson rounded out the top 10.