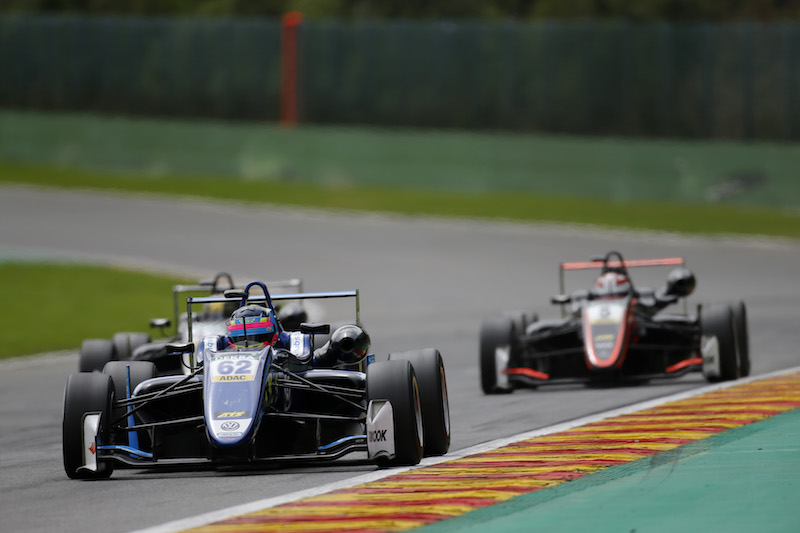 Ferdinand Habsburg came from eighth on the grid for an unlikely maiden European Formula 3 win in race two at Spa-Francorchamps, as Joel Eriksson charged from 12th to second.

Carlin driver Habsburg had a great run off the start and was up to fourth into Les Combes for the first time when pole-sitter and race one winner Lando Norris collided with Guan Yu Zhou on his outside right in front, with both drivers forced to retire and Habsburg falling to sixth after having to take to the run-off.

Unlike in race one, Callum Ilott had already managed to take the lead away from Norris before this point, but his lead only lasted a lap before his Prema team-mate and points leader Maximilian Gunther made a brave move around the outside.

After falling into the clutches of Jake Hughes, Ilott dropped to 1.3s behind Gunther, but by the middle of the race had repeated Gunther’s trick to reclaim the lead.

A lap later, Gunther was back in front, and Habsburg was right in the lead fight following a move on Hughes.

After another lap, he too had cleared Ilott, and with seven minutes to go he slipstreamed past Gunther and into the lead.

He was followed up the order by Eriksson, who passed his championship rival Gunther for second on the penultimate lap and finished 2.1s behind Habsburg.

Gunther kept Hughes at bay for third, while Nikita Mazepin jumped his fellow Force India-affiliated racer Jehan Daruvala for fifth at the Bus Stop on the final lap, with both having demoted Ilott.

Ralf Aron leapt to third on the first lap only to fade to eighth, in front of Mick Schumacher and Joey Mawson.