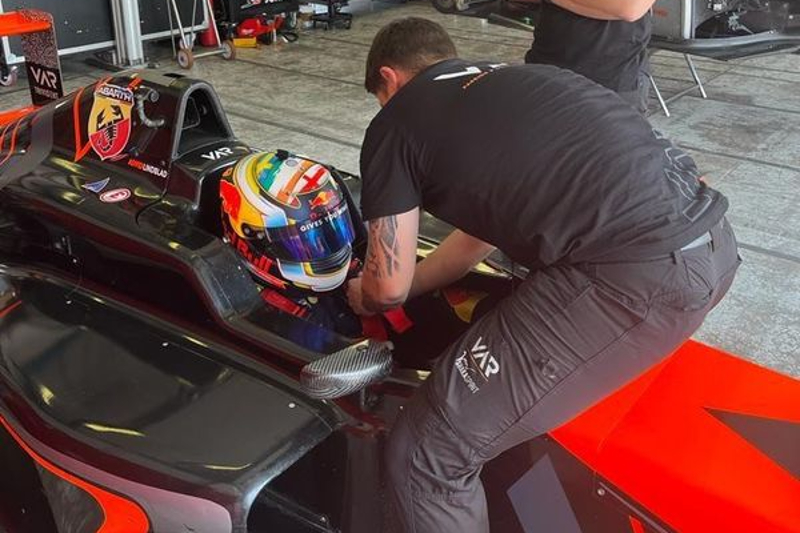 Arvid Lindblad was fastest in Italian Formula 4 in-season testing at Misano this week, again doing so in a previous-generation car.

The Red Bull-backed protege of Oliver Rowland is currently in karting and is set to debut in F4 with Van Amersfoort Racing later this year.

At present VAR does not have enough of the new Tatuus T-421 cars used in Italian F4 to run one for Lindblad in testing, so for his first runs in a single-seater last week at Vallelunga – where he was also fastest – and Misano he has driven one of the 2021-spec T-014 chassis instead. Teams have finetuned the set-up on the old car, so it is currently faster than the T-421.

The 37-strong Misano entry list was split into two, with Lindblad spending day one in ‘Group A’. He topped the test’s first session on Wednesday with a 1m35.829s lap, putting him 0.034 seconds ahead of PHM Racing’s Nikita Bedrin, and a second covered the top 11 cars.

Lindblad also topped session two, improving to 1m35.188s, and this time US Racing’s points leader Alex Dunne was the top driver in a Gen2 car, setting a 1m35.343s. That second morning session, for both groups, would prove to be the fastest session for 12 drivers and most of those were in the top 10.

Prema’s Andrea Kimi Antonelli headed both of Group B’s morning sessions, his best lap being a 1m35.594s, with team-mate James Wharton his closest opponent and 0.049s behind.

Bedrin bettered Lindblad by 0.095s in the first of their group’s afternoon sessions, but Lindblad struck back in their lat session by 0.757s. On both occassions, BWR Motorsports’ Alfio Spina was third fastest.

Prema continued its lockout of Group B in the afternoon, with Wharton and Charlie Wurz heading the two sessions. They were on track before Group A for Thursday, and Antonelli returned to the top with a 1m35.686s lap to top the first session by 0.212s over Iron Lynx’s Maya Weug as BWR added a second car for Rishab Hain.

Weug was among 10 drivers who bettered their Wednesday pace, and it was similar in Group A as Lindblad broke into the 1m34s and nine drivers improved their personal bests.

Wharton pipped Antonelli and Weug by 0.026s and 0.066s respectively in session six, with further improvements coming in from drivers sown the order, and Lindblad ended his morning unbeaten.

He switched to Group B for the afternoon and was 0.796s faster than Wharton in the first afternoon session, but skipped the final running and it was AKM Motorsport’s karter Rashid Al Dhaheri who set the pace. He lapped 0.010s quicker than Antonelli.