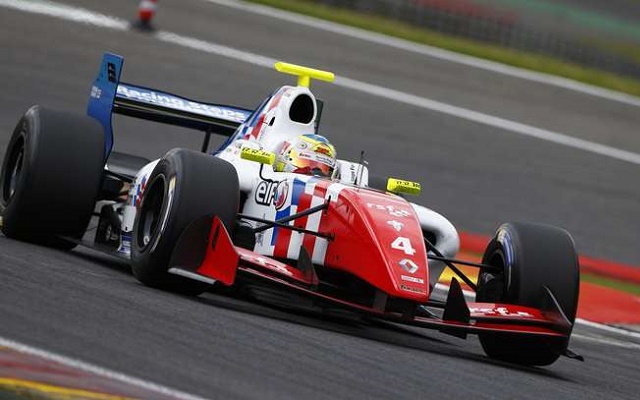 Fortec’s Oliver Rowland reclaimed the championship lead in the Formula Renault 3.5 series with a confident win in the Sunday race at Spa.

The Brit seemed in complete control around the Belgian track and ended up easing to the checkered flag as he led every lap along the way.

After stealing pole from Tio Ellinas at the last second in this morning’s qualifying, Rowland got a steady start, while Ellinas bogged down, allowing Nyck de Vries into second.

Rowland quickly established a two-second lead over the Dutchman, with Dean Stoneman slotting in a further two seconds behind and Ellinas keeping Matthieu Vaxiviere at bay for fifth.

And that’s how the top five ran for much of the race, all opting to change tyres later in the pit stop window.

Stoneman stopped a lap earlier than his rivals, who came in on the lap when Beitske Visser stopped at turn seven with a seeming mechanical issue.

No positions changed hands in the pits, but the new tyres breathed life into Vaxiviere’s car, the Lotus man ramping up the pace massively.

He first dispatched Ellinas with ease and then caught up to Stoneman, going past with a late-braking move into Bus Stop and holding him off out of Eau Rouge on the next lap.

De Vries fended off several attempts, confidently covering the inside line and eventually establishing enough of a safety gap to break the slipstream and hold on to second.

Stoneman ended up in danger of losing fourth to Ellinas, but successfully defended from the Cypriot’s attacks.

A brilliant early charge from Jazeman Jaafar, who was sent to the back of the grid for technical infringements on his car, saw him go from 20th to sixth before the pit stops.

And sixth was where he finished, despite catching up to Stoneman and Ellinas and nudging the Cypriot in the final corner.

Aurelien Panis made it up to seventh with an early stop, holding off Draco’s Pietro Fantin, with Egor Orudzhev and Meindert van Buuren completing the points.