After the GP3, Italian F3 and Formula Abarth finales this season, you wouldn’t expect to see title deciders that would top those in 2012. However, once again motorsport reinforced its state as a unique and massively unpredictable category of sports, as the F3 Open finale at Catalunya has produced more drama than one could’ve possibly expected it to. What looked like a fairly standard (for our sport, anyway) title showdown between Gianmarco Raimondo and Niccolo Schiro turned into a chaotic and unpredictable finale thanks to rain, guest drivers and dropped scores.

Raimondo entered the weekend with a seemingly massive 15 point lead over Schiro with nobody else in mathematical contention for the title. However, the 15 points ended up being quite a tad misleading as the fact that there would be dropped scores wasn’t that well-known or often mentioned by the commentators. Entering the weekend, Raimondo’s worst results were a fourth and a fifth (22 points in total), while Schiro’s – a fourth and a DNF (12 points in total), so that made the real gap just five points.

Going on after a spectacular double win at Monza, Schiro started off this round with a pole position, lining up alongside Facu Regalia on the grid, while Raimondo lined up fourth, behind Roberto La Rocca. The first race, as it often happens this year, proved fairly drama-free, with Regalia taking the lead from Schiro with a better start and keeping it for the entire 17 laps. Schiro had to contend with second, while the podium was completed by Alex Riberas, who was participating in this round as one of the guest drivers. That status, therefore, made him ineligible for any points and the 15 for third went to Raimondo. Mans Grenhagen completed the top five ahead of La Rocca and Ed Jones, another guest driver. 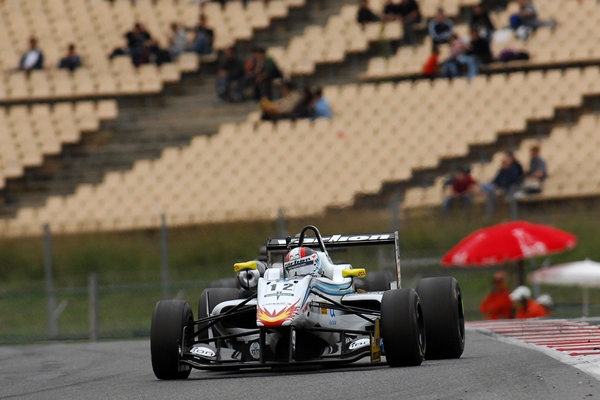 Away from the title fight, Regalia was unstoppable (Photo: f3open.net/Fotospeedy)

Therefore, entering the final race on Sunday, with dropped scores taken into account, Raimondo’s lead over Schiro was decreased to just one point. The second qualifying session saw Regalia emerge as the quickest with Jones taking second, but, more attention was due to the next row of the grid, where the title contenders lined up alongside each other, Raimondo ahead. The start of the race was hectic and, while Regalia kept his lead, both Raimondo and Schiro ended up going wide into T1, the former colliding with La Rocca and badly damaging his car. As both drivers ended up pretty far down the order after the start, it looked like the outcome would be favourable for Raimondo because Schiro needed to finish third or higher among the F3 Open regulars to improve on his final points total.

However, at that point, it started to rain, which caused a couple of spins and produced a safety car. While Schiro went into the pits for a tyre change, Raimondo was also there, his mechanics vainly attempting to straighten out the bent suspension of his vehicle. Both got out of the pits way down the order but, as the safety car came in, Schiro started finding major pace on his tyres and began to overtake the field, with Raimondo lacking the vehicular integrity to do so. With the race running to time (due to the safety car) and ten minutes remaining on the clock, Schiro was fifth already, with Regalia, Jones, Riberas and Tatiana Calderon ahead of him.

Raimondo was also putting on a performance, overtaking much less damaged cars on his way to seventh, but, as things stood, Schiro would claim the title. With three or so laps to go, Calderon retired in the gravel, promoting Schiro to fourth (second among regulars), with Grenhagen five seconds behind him and Raimondo a further five back, needing to pass both of them for the title. That he did not do. Instead, Raimondo went into the pits for whatever unclear reason with nothing actually being done to his car, and, after talking to someone from his team, drove out back on track, seemingly surrendering any title hopes he had.

On the last lap, the leading group had to avoid a stalled car right on the inside of the final corner, which Regalia did to take his second win of the round. Jones and Riberas also managed to go on the outside and complete the podium while Schiro took the inside line and clipped the stalled car (that belonged to, interestingly enough, his teammate and only competitor for the title) with his rear wheel. However, the collision did not bring Schiro’s car to a halt and it crossed the line in the title-securing fourth squarely thanks to momentum, avoiding what could be the biggest scandal in junior single seater history. Grenhagen completed the top five.

Too close for comfort: Schiro and Raimondo at the start of the decisive race (Photo: f3open.net/Fotospeedy)

As such, with 272 points, Schiro is the crowned F3 Open champion after a finale that is sure to be remembered for quite some time. In second is Raimondo, missing the title by five points, while in third is Grenhagen, who is probably glad to see the season over after the misfortunate second half of it that he’s had.

After stealing the show in the Formula Abarth season finale, Antonio Giovinazzi returned to the primary series of his 2012 campaign and absolutely dominated its penultimate round at Sepang.

Giovinazzi was untouchable in the two qualifying sessions, clearing the field by over a second in both. In race one, he scored an utterly crushing victory in difficult weather conditions, as second-placed Raj Bharath crossed the finish line 40 seconds later after only ten laps. Main title rival Dan Wells did well to complete the podium, while the leader of the “Best Asian Driver Trophy” standings Parth Ghorpade was fifth behind Afiq Ikhwan.

The six-lap sprint race was also won by Giovinazzi in dominant fashion with Bharath and Wells completing the podium again. Series regulars Sean Gelael and Ren Nagabuchi rounded out the top five.

Finally, Giovinazzi did a similar job in the final race of the weekend, finishing 16 seconds ahead of Wells with Ghorpade taking third. Nagabuchi was fourth while Ikhwan completed his second FPC round of the year in fifth.

In the standings coming into the final round, Giovinazzi has amassed a 40 point lead over Wells. Ghorpade, while still third in the standings, is seemingly out of contention (63 points adrift with only 55 available in a round), but the championship situation is still a little unclear as dropped scores might come into play. The final round of the season will take place at, yet again, Sepang with three races on December 8th. 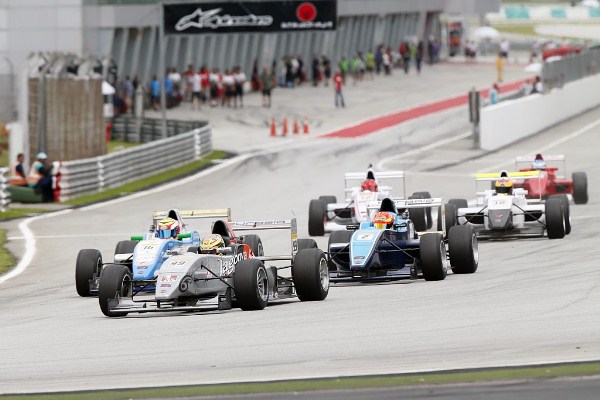 PaddockScout Driver of the Weekend: Facu Regalia – Even if he benefited from doing the GP2 test at the same circuit earlier in the week and in mixed conditions, the Argentine was faultless. A sign of potential from the well-funded racer ahead of his anticipated step-up to GP2 for next year.