Roundup: Another win for Leimer and more Coletti podiums

There was more of the same in round two of the GP2 Series at Sakhir, with Fabio Leimer winning the feature race but Stefano Coletti continued a 100 per cent podium record to hold the points lead…

On Friday in Bahrain, Fabio Leimer was putting in one of the most dominant performances in GP2 history, topping free practice by over a second and then claiming by pole position by a margin nearly as large.

At the start of the feature race, he and Stefano Coletti resumed their early title battle, the Monegasque getting another good start to attack the Swiss driver. Leimer held on to the lead, and although he didn’t dominate in the way that was expected, his second win from as many feature races in 2013 never really looked in doubt.

But for all his dominance at the start of the weekend, his race results followed the same pattern as they had in Malaysia, with another non-score on the Sunday. Not for the first time, he was unable to use his pace to make progress in traffic (albeit not helped by damage sustained in contact from Alexander Rossi at the start), and even slipped out of the points to ninth by the end as his tyres faded.

Coletti also had a something of a repeat of Sepang’s sprint, moving up to second early on after starting back in seventh. He would fall back to third at the end with familiar tyre trouble of his own, but that still means he has finished in the top three in all four races so far – a record that gives him a ten point advantage over Leimer at the head of the standings.

The man getting past Coletti to finish second was Felipe Nasr, who quite literally repeated his Malaysia results with a fourth in the feature race followed by a second place in the sprint. He, Coletti and leader Sam Bird spent much of the sprint race separated by several seconds, but they closed up at the end as they tried to hold onto the life in their tyres. And not for the first time in his short GP2 career, Nasr displayed brilliant rubber-saving skills. That enabled him to pounce on Coletti, and he would probably have beaten Bird to the chequered flag if it had been a bit further down the pit straight. With 24 points collected in each of the rounds so far, he’s only six off Leimer and well in the title hunt. And that first win can quite literally not be closer. 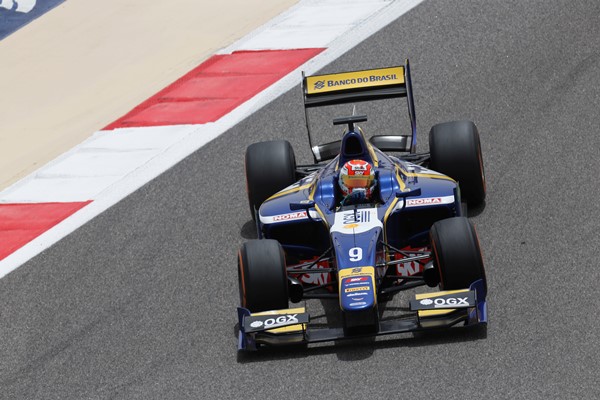 Bird’s win was the first for the new Russian Time setup, in just their second race weekend. After showing strong pace in Malaysia, his chances of a podium in the Sakhir feature were lost to a slow pitstop. That shows the team have work to do, but that’s to be expected of a team that only did one pre-season test before sending their cars off to Malaysia. As Bird explained, only now will they get them back to their Oschersleben base for the first time, and he should certainly not be ruled out as a title threat.

While Leimer and Coletti filled the first two steps of the podium on Saturday, the real star of the race was the man on the third – Rossi. Finally brought into the Caterham that had seemingly had his name on it all winter, it was the American’s first proper GP2 Series race (he previously did a GP2 Asia campaign at the non-championship ‘Final’ in Abu Dhabi). Qualifying seventh was an impressive enough start, but after getting up to fifth with a good start, he took advantage of an early, clean pitstop to climb to third. He coped admirably with the Pirelli tyres – which he hadn’t driven on since testing last November – to keep a charging Nasr at bay and grab a debut podium. His sprint race was wrecked by the early contact with Leimer but, despite the deficiencies of the Caterham GP2 team, expect to see plenty of Rossi at the sharp end this year.

For James Calado, it was another trying weekend. On the back foot before the weekend began due to the grid penalty sustained for his Sepang collision, he and ART then struggled for pace on both Friday and Saturday. After qualifying 11th gave him 21st place on the grid, more was expected than a 12th place finish. A damaged front wing and slow pitstop didn’t help, but he still struggled for pace. Things were better on Sunday, when a good start got him up into seventh, before losing that place to Jolyon Palmer. This time though he had the race pace to hold on to those in front, while doing a good job of preserving the life in his tyres, which enabled him to charge through to fifth in the final few laps. That salvaged some points from his weekend, but he’s only got 24 so far in comparison to Coletti’s 64. It’s crucial he strikes back in Barcelona, where he was on pole last year. 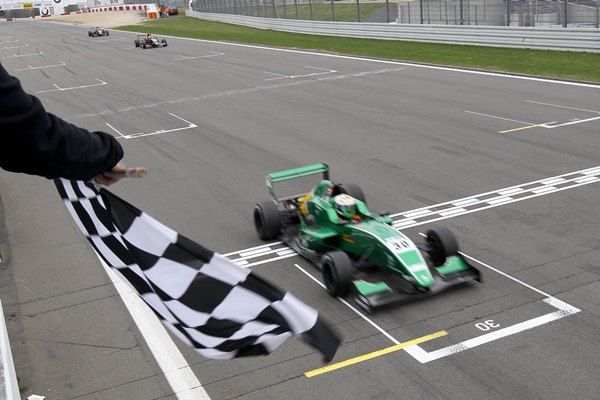 Parry crosses the line to take the first of his two wins (Photo: Chris Schotanus)

Pre-season, Intersteps champion Matt Parry was one of the favourites for Formula Renault 2.0 NEC, in terms of drivers who will complete the full season. However, few would have expected him to beat a host of top runners from the Eurocup in just his second weekend in the category.

It was one of those regulars, Oscar Tunjo, on pole position for race one, but Caterham protege Parry made a superb start to take the lead at turn two, and he stayed out front for the rest of the race to beat Lotus youngsters Esteban Ocon and Tunjo. Parry started on pole for race two and converted that into a lights-to-flag victory.

That result gives him the outright championship lead, but he also now has twice as many points as the nearest-placed driver confirmed for the full NEC campaign, Fortec teammate Shahaan Engineer in seventh.

It was a mixed weekend for most of the other leading drivers in the field. Ocon and Tunjo could only manage seventh and tenth respectively in race two. Gustav Malja finished second, after a first-lap clash dropped him down the order in the first race. Mikko Pakari completed the podium in race two, adding to his fifth from race one. Andrea Pizzitola was fourth after retiring from race one, and now lies fourth in the standings behind Ocon and Pakari, while Aurelien Panis had an impressive weekend with a fourth and a fifth.

Report: Parry storms away to race one victory

Next round: Silverstone, 1-2 June

Dan Cammish continued to use his experience to his advantage at the second race weekend of the Formula Ford GB season, racking up three more lights-to-flag victories as he did at the Brands Hatch opener.

Behind that, Jamun Racing’s pair of Argentian rookies had good showings. Juan Rosso was making his debut after injury kept him out at Brands, but defied his lack of experience to take two second places after a fourth in race one, while teammate and compatriot Nico Maranzana finished the three races in sixth, fourth and third. The duo are both on the same Sergio Rinland-run scheme as Eric Lichtenstein, who drove for Jamun and turned the tables on then-dominant JTR driver Antti Buri to dominate the second half of the season. After their promising start, Rosso and Maranzana look capable of challenging Cammish later in the campaign.

The same can be said of Harrison Scott, who was second, third and fifth in the three races, and after a quiet start at Brands Hatch has now climbed to third in the standings behind Cammish and Maranzana. Falcon teammate Lassi Halminen?joined Scott on the race one podium.

After a promising opening weekend, Camren Kaminsky struggled at Donington, car problems not helping matters. New JTR teammate Sam Brabham did impress though, with a fifth, a seventh and a sixth. 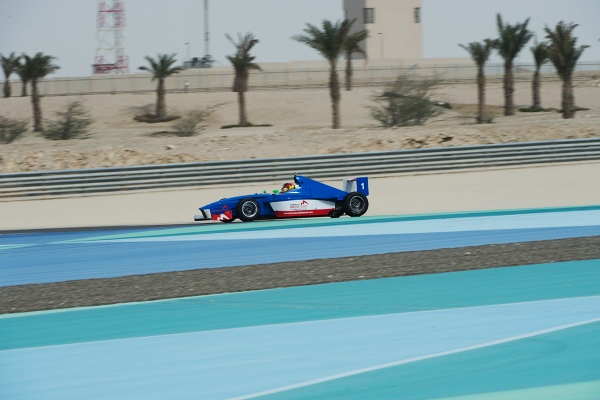 A second and final meeting of the slightly-stalled Formula Middle East for Formula BMW machinery took place as a support event to the Bahrain Grand Prix. Emil Bernstorff was this time joined by Michela Cerruti as the only internationally recognised drivers, and the British racer was able to rack up two more wins to finish up with a 100 per cent win record from the six races.

It was locally based Frenchman Alban Varutti, a 27-year-old with a strong karting record but no single-seater experience, who offered the greatest resistance to Bernstorff. He finished only three seconds behind in race one with Cerruti completing the podium. In race two Varutti was again second, but this time 13 seconds adrift of the winner and just tenths ahead of Cerruti.

In round two of the season in Brasilia, GP3-bound Felipe Guimaraes was the victor again in the weekend’s first race, having won both races at the Interlagos season opener earlier this month. He was unable to complete the double though, as after taking the lead at the start of race from sixth on the grid, he suffered broken suspension and crashed.

It was left for 16-year-old Gustavo Lima – today confirmed for the coming BRDC F4 season – to pick up the pieces and win the race after starting ninth. Finishing second was Raphael Raucci, who is Guimaraes’ nearest rival in the points.

Julian Santero claimed a second victory of the season in round two of Formula Renault Argentina at Rosario. Runner-up to Eurocup newcomer Javier Merlo in the 2012 championship, the 19-year-old beat 18-year-old Manuel Luque by 0.291 seconds. Chilean Felipe Schmauk finished in third place.

Santero now has 44 points, with Miguel Calamari his nearest rival on 27 points after finishing fourth in Rosario.

Parry gets our award this week for his double victory against illustrious company in the NEC round at the Nurburgring. He looks like he will hard to beat for the title.