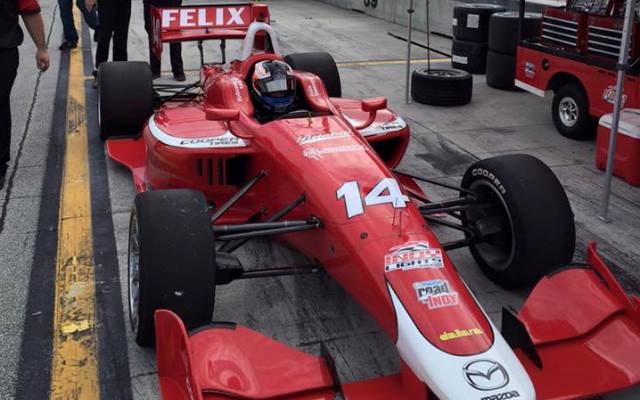 Felix Rosenqvist was the fastest driver over both sessions on the second day of testing for the Indy Lights series at Homestead-Miami Speedway on Wednesday.

Testing for Belardi Auto Racing over the two-day period, the 24-year-old Swede set the outright fastest time of testing in the morning session – a 1:14.437 around the infield road course.

He was followed closely all day by?Tuesday’s fastest driver?Ed Jones, and fellow rookie?Santiago Urrutia. Jones finished second ahead of Urrutia in the morning session, with Urrutia finishing ahead of Jones in the afternoon – the afternoon session saw Rosenqvist, Urrutia, and Jones’ fastest times?separated by only 0.0435 seconds.

Behind Rosenqvist, Urrutia, and Jones in the afternoon running were Serrales, Enerson, Kaiser, Blackstock, Veach, Alberico, and DeMelo in that order.?Dalton Kellett?was slowest in both Wednesday sessions, and was the only driver that did not set a sub-1:16 lap time at Homestead testing.

The quickest man in the two days of testing at Miami, Rosenqvist will be staying in Florida as he prepares for his?endurance racing debut in the Rolex 24 at Daytona this weekend. He’ll be driving in the Prototype Challenge class for Starworks Motorsport.

The next test for the Indy Lights series will be on 25 February, at Phoenix International Raceway’s 1-mile oval.