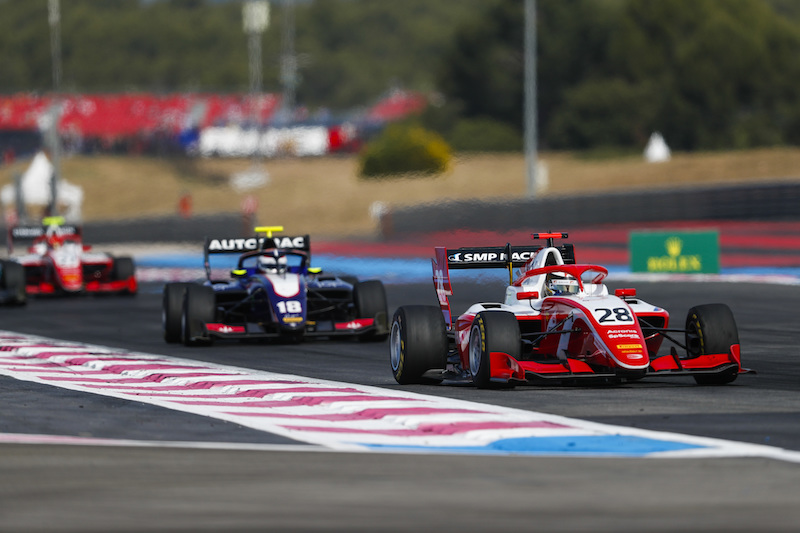 Robert Shwartzman took his second win of the FIA Formula 3 season in the reversed-grid race at Paul Ricard, as Prema continued its unbeaten start to the series.

From seventh on the grid, Shwartzman snatched the lead mid-race after going side-by-side with pole sitter Alex Peroni and Yuki Tsunoda, narrowly avoiding Peroni when the Campos Racing driver locked up and cut across the corner.

Peroni and Tsunoda both dropped backwards in the second half of the race as Pedro Piquet and Jehan Daruvala pushed through to the podium positions. Piquet and Daruvala swapped places a number of times, allowing Shwartzman to pull away at the front of the field.

Shwartzman ultimately finished 1.4s ahead of Piquet, with his second victory of the year puts him seven points ahead of Daruvala in the championship standings early in the season.

Team-mate Marcus Armstrong had less luck. He lined up third on the grid but stalled at the start, plummeting down the order. He put in a strong recovery drive to finish sixth, behind Richard Verschoor and Liam Lawson.

Juri Vips, who started directly behind Armstrong on the grid, fell back at the start, dropping to seventh before being passed by David Beckmann. Vips tried to fight back, making contact with Beckmann and puncturing the ART GP driver?s rear tyre.

Beckmann was forced to retire and Vips was later given a five second penalty, finishing 17th.

Tsunoda also picked up a five-second time penalty for squeezing Peroni off-track during their tussle for the lead. He slipped to an eventual ninth place, behind the battling?Jake Hughes and Logan Sargeant for the final points-paying positions. The pair raced through the high-speed Signes corner side-by-side on the penultimate lap and Hughes made the move stick.