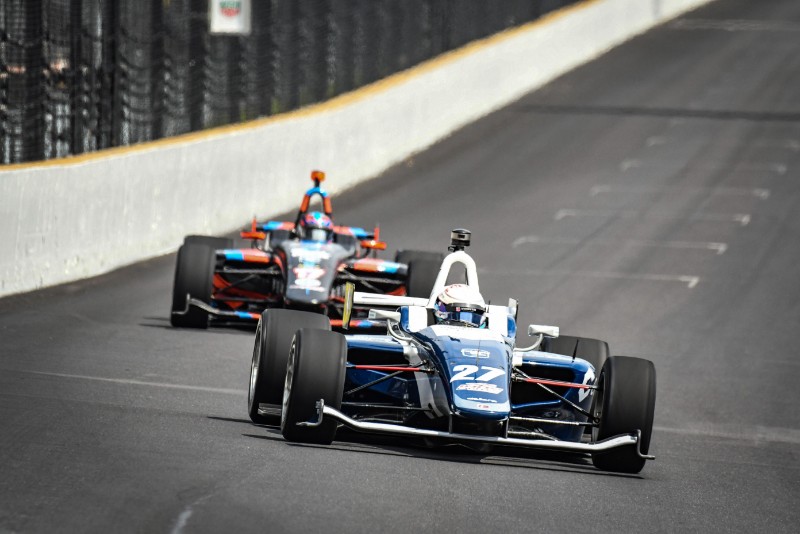 Robert Megennis claimed pole position for the Indy Lights Freedom 100 at Indianapolis as Andretti Autosport locked out the first four positions on the grid.

Askew was 0.2mph slower after his two-lap run.

Askew and Megennis were the only drivers to post a total time in the 1m32s bracket with Megennis heading Askew by a tenth of a second.

Ryan Norman was third after setting a two-lap average of 193.033mph, although did top the time sheets until Megennis and Askew posted times later in the session.

Jarett Andretti completed the Andretti lockout at the top of the grid on his series debut with an average speed of 192.822mph, 1.4mph slower than Megennis.

Lucas Kohl and Aaron Telitz were fifth and sixth quickest for Belardi Auto Racing with speeds of 192.602mph and 192.489mph respectively.

Telitz was a late entry to the Freedom 100 field with Belardi after a switch to GT racing this year following two seasons of racing in Indy Lights with the team.

Rinus VeeKay was ninth in the second Juncos Racing entry with an average speed of 192.124mph with Belardi?s Chris Windom and BN Racing?s David Malukas rounding off the grid.

The Freedom 100 race takes place on Friday at the Indianapolis Motor Speedway.