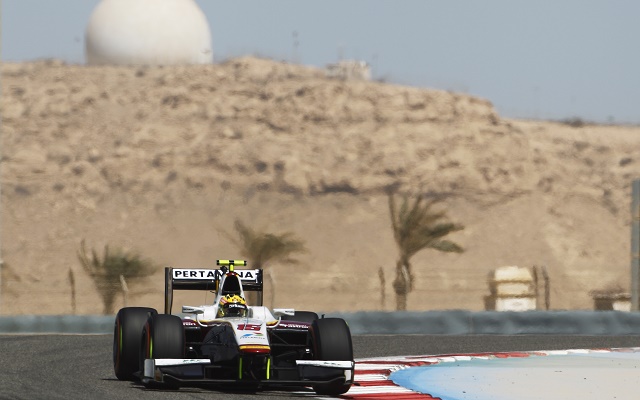 Haryanto, who took three GP2 podiums in his previous 71 starts, got to stand on the top step in his second outing with Campos.

The Indonesian managed his race to perfection to deliver a victory that seemed inevitable after the opening laps.

Carlin’s Julian Leal lined up on pole for the second time in his GP2 career and led off the line, with fellow front row starter Nathanael Berthon dropping back to eighth.

Russian Time’s Mitch Evans made it up to second, while Haryanto, having lined up in seventh, was up to third.

But, when the Indonesian found his way past the Kiwi round the outside into turn one, he almost immediately went on to erode Leal’s lead.

He then got a good exit into the final corner and drove past Leal with DRS, completing the pass even before the braking zone.

Evans desperately tried to keep his victory chances alive as he also caught Leal, but the Carlin driver put up a massive fight. Eventually, the Kiwi outbraked himself and allowed Robert Visoiu through, the Rapax driver then overtaking Leal with ease.

The Russian Time driver finally looked set to get past the Colombian on the inside line, but Leal sternly stuck around the outside and the pair made contact, resulting in a puncture for Evans.

It was good news for ART pair Nobuharu Matsushita and Stoffel Vandoorne – as both made it past Leal right after.

The French team’s drivers looked to be Haryanto’s biggest worry, setting great pace and eventually demoting Visoiu off the podium.

But neither Matsushita, nor Vandoorne, who overtook his Japanese teammate shortly thereafter, could make inroads on Haryanto’s lead, the Indonesian picking up the pace every time his rivals looked quicker.

As such, Haryanto claimed the win with Vandoorne in second – the same two drivers who headed the pack in yesterday’s race.

Matsushita dropped behind Alexander Rossi and a recovering Berthon, with the Frenchman then passing the Racing Engineering driver for the final podium spot. Behind them, Leal reclaimed a spot over the Japanese racer on the final lap.

Struggling with tyre wear, Visoiu nonetheless kept both Andre Negrao and Jordan King at bay for seventh. The latter had been involved in the race’s most notable incident earlier on, clashing with Sergio Canamasas after being forced off-track.