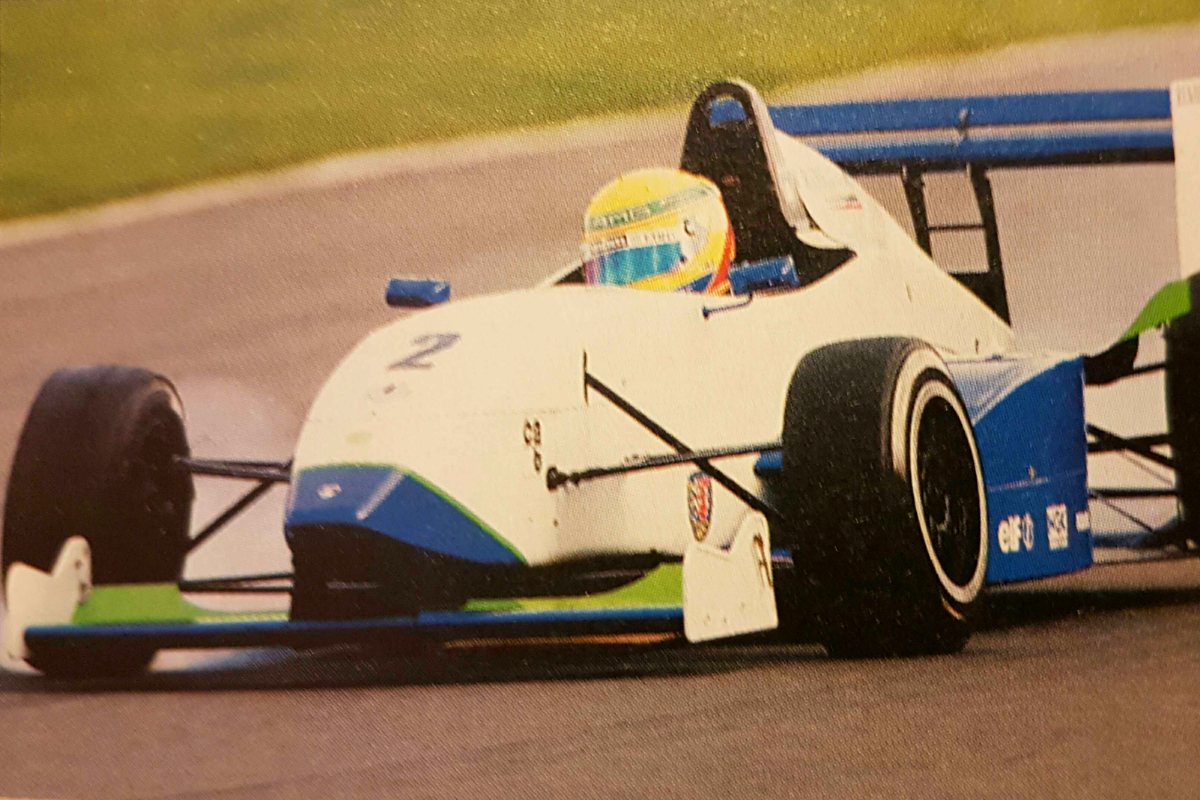 As Lewis Hamilton turns 36, we look back at his first days in junior single-seaters in FR2.0 UK in 2001

The recently-knighted Lewis Hamilton will start this year’s Formula 1 season as the most successful driver the series has ever had. He now has seven world championship titles, 95 wins and 98 pole positions to his name, and he could take several more records in the 23 grands prix planned for 2021.

Hamilton’s first ever run in a single-seater car came in one of Manor Motorsport’s Formula Renault 2.0 cars on October 17, 2001 at the Mallory Park circuit in Leicestershire. According to those present he drove with the “typically committed” style he has became known for, and had an off at the high-speed Gerard’s Bend that opens the lap during his first day in the car.

His time in testing wasn’t the most rewarding. In the official pre-season test for the Formula Renault UK Winter Series a week later at Snetterton he had his track time reduced by wet conditions, and then an engine change that prevented him from setting a representative laptime.

The then-16-year-old signed with Manor for the two-round series, making him the youngest ever driver at the time to race in the category in Britain. Joining him at the team would be Dutch karting sensation Nelson van der Pol, while other drivers to watch included old karting rival Colin Brown (Aztec International), British Karting Championship runner-up Jamie Green and his Fortec Motorsports team-mate Dominic Cicero, who had last raced in single-seaters in 1998.

“Formula Renault looks fantastic and I can’t wait to get out on the track,” said Hamilton, then a McLaren junior, at the time.

“I have got my feet on the ground as I know I have a lot to learn and face good drivers with more car racing experience than I have right now.

“It will be very interesting to see how Colin, Nelson, Jamie and I all rate against one another once the new boys find our feet.” 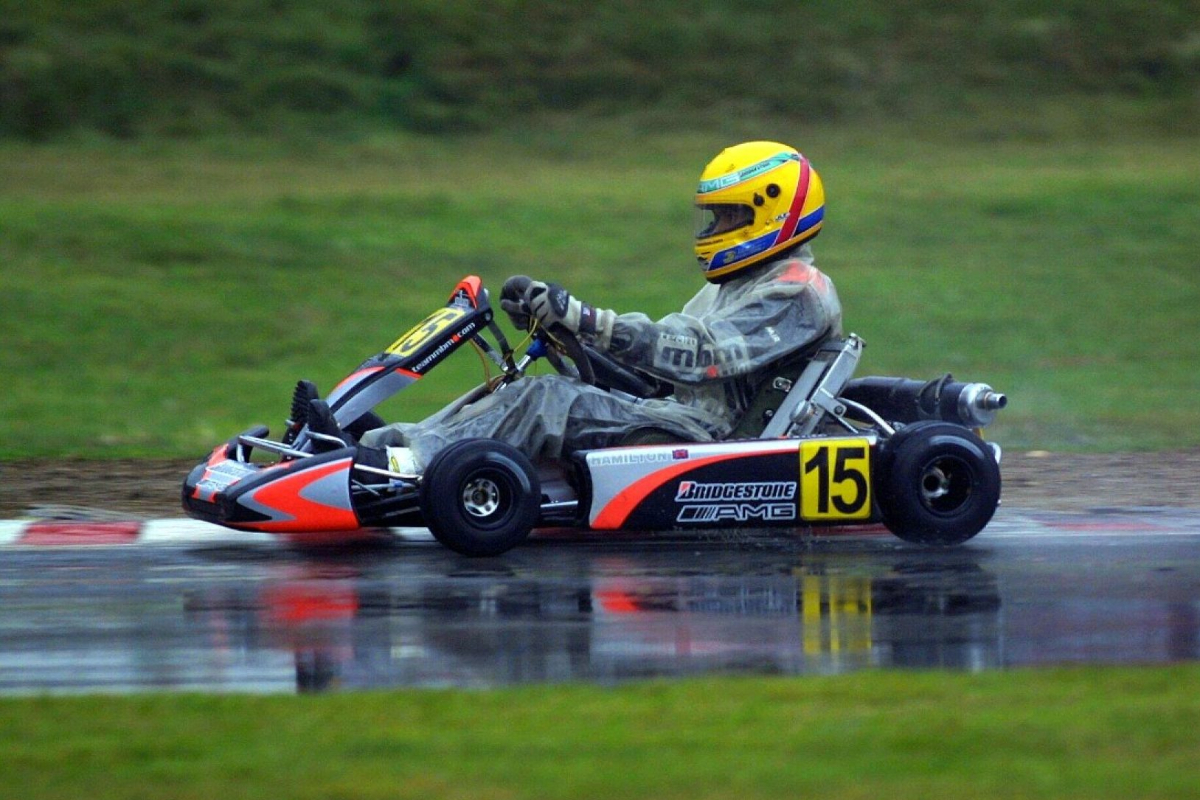 Manor’s team manager was Tony Shaw, who recently shared his impressions of the debuting Hamilton, and the quality of that year’s FR2.0 UK Winter Series, with Formula Scout.

“The first thing about that particular winter series is I remember it being really strong,” says Shaw.

“I remember a lot of quite experienced drivers, that had all been in Formula Ford, or Formula Vauxhall Junior, and getting used to handling a heavy car [there].

“So it was strong from that perspective, but also I think from the fact that so many top karters were coming in. Jamie Green, Alex Lloyd, Lewis of course, and a number of others.

“I don’t think we had a great deal of time to prepare for Lewis’s [debut]. He had that first test at Mallory, and I’m sure the reason we did that was probably just timing. Maybe Lewis had come back from his last kart event, can’t remember exactly why, maybe it was just a true Yorkshire way of doing it and it was dead cheap!

“He was attacking straight away. Not scared of it, very, very easy to get along with, and a sponge for information, really.”

T Cars champion Ben Reeves was also supposed to race for Manor in round one at Rockingham, but his car couldn’t be repaired after he binned it in pre-event testing, and FR2.0 BARC champion Martin Wallbank had a dismal test too ahead of his first FR2.0 UK appearance due to a hole in the engine sump in his Scorpio Motorsport-run car.

None of the above names, Hamilton included, were the drivers at the front once the competitive action began though as proven Formula Ford racer (and future GT World Challenge Europe Endurance champion) Rob Bell set the pace in qualifying for Motaworld and was followed by Formula 3 racer Julien Piguet driving for France’s Team Chistel Sport.

Bell had raced a FR2.0 car once before, but his inexperience at getting the car off the line showed and he was immediately passed by Piguet at the start of race one at Rockingham. 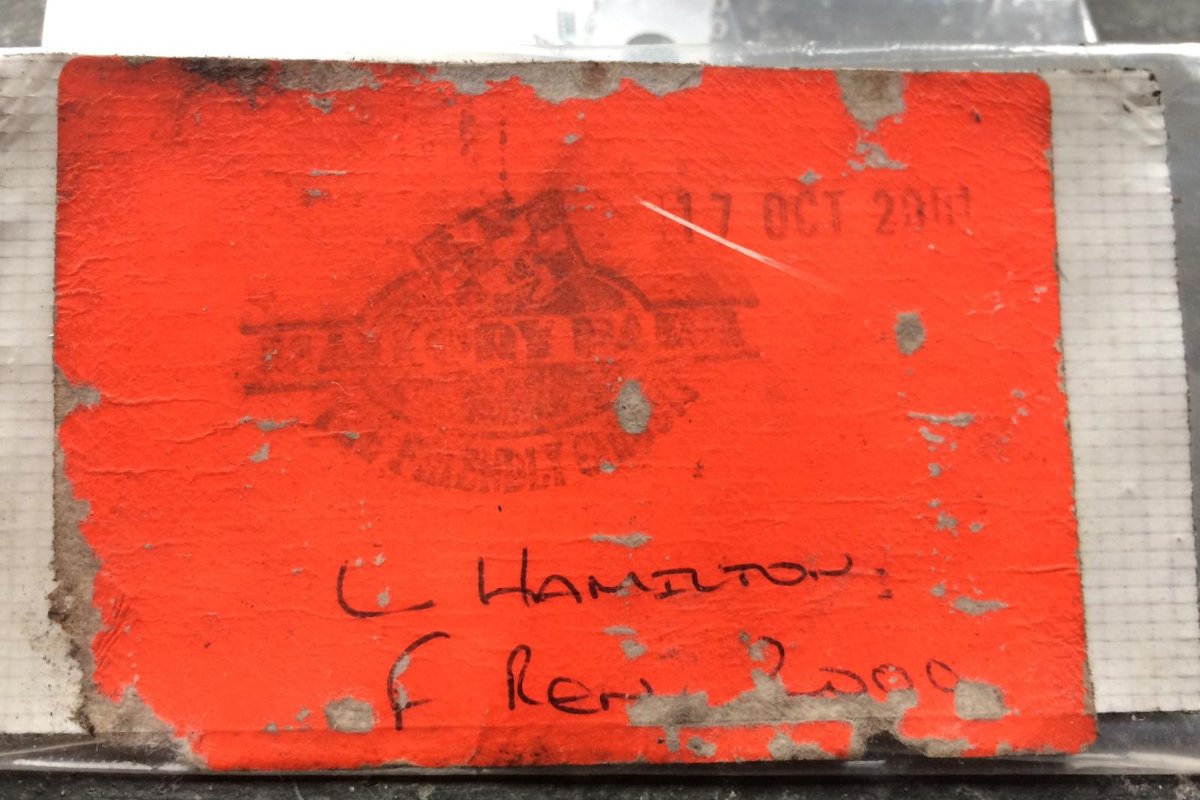 Red flags were being waved soon after due a multi-car crash further back in the field, and in the restarted fixture Piguet got the jump on Bell again. The race had to be restarted once more though, as van der Pol had failed to get going from his grid spot.

Piguet was the faster starter on the third attempt at a race, but this time Bell responded by getting past into the Deene hairpin. Bell ended up then going wide, and dropped back behind Piguet and Saxon International’s Alex Kapadia.

An early lead was built by Piguet, while Bell picked Deene again to make a move when he overtook Kapadia for second. Come lap five of the shortened six-lap encounter and the top two were close, with Bell getting ahead in the final corners. There was just one lap more before another red flag brought the race to a permanent halt, and Hamilton was classified 15th.

Race two went far better for Hamilton, while Bell and Piguet were a step above everyone else again. Piguet bettered poleman Bell off the line for the fourth time in two races, but this time when Bell came back past at Deene for the first time he actually made it stick and then romped to a 6.81s victory.

Hamilton was initially stuck down in seventh place behind team-mate Matt Howson, who couldn’t match the early pace of the top five and had more worn tyres than the F1 junior. Being pressured by Hamilton led to him upping his game though, and the pair had closed in on Brown for fifth by lap five of a scheduled 14.

A failed pass by Howson on Brown allowed Hamilton to gain a place at the Tarzan hairpin, and he took another when Brown spun down the order. The two Manor drivers went chasing Kapadia for fourth, until Howson also span on lap 11. That allowed Hamilton to focus all of his efforts on attacking Kapadia, and on the next lap he set up his attack into Tarzan. He locked up, but ran alongside his rival until the final Gretton hairpin where he got the move done for fourth.

By that point a podium was way out of reach though, with Bell having sprinted away from Piguet and Paston Racing’s Martin Steyn being a comfortable third. Despite the fruitless first race, Hamilton’s race two result was enough to vault him up to sixth in the points. 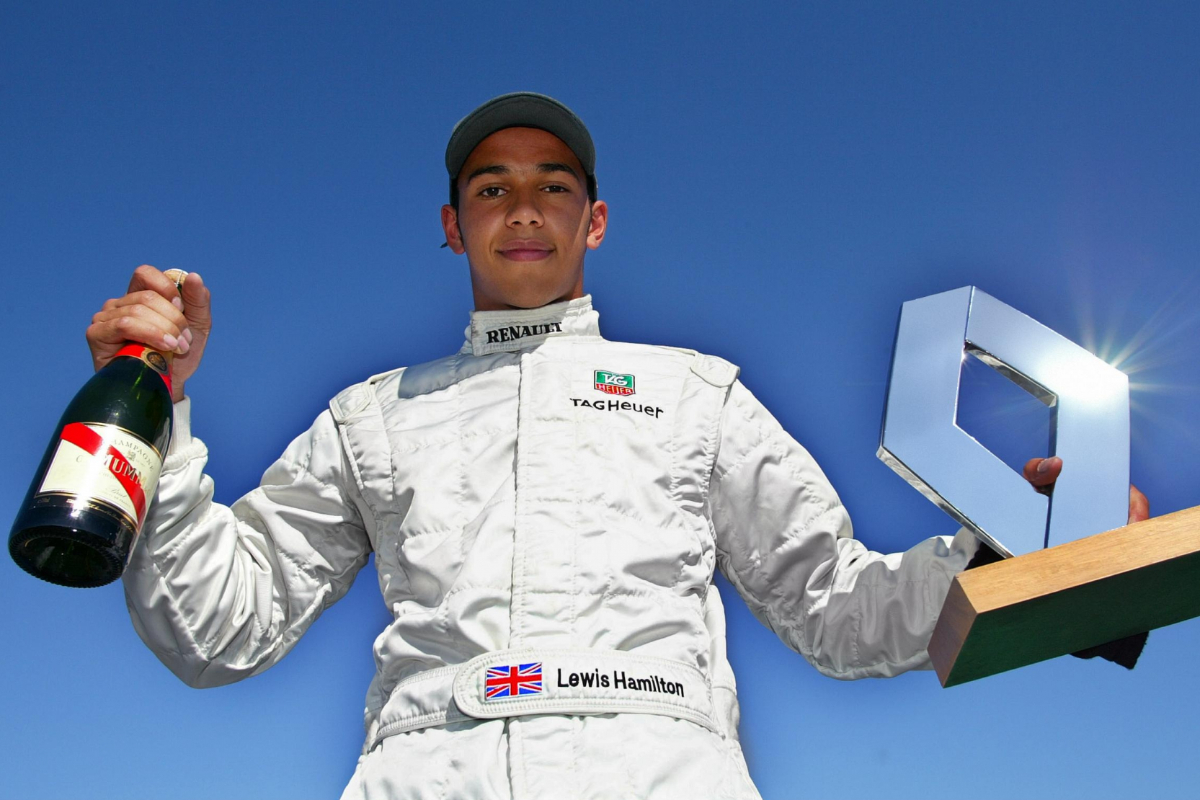 The title-deciding second round took place at Donington Park a week later, and Bell took another double win to become champion. Surprisingly, he would win the title again in 2002.

Hamilton’s Donington weekend was even more dramatic than his time at Rockingham, and it certainly caught the attention of McLaren’s managing director Martin Whitmarsh.

Race one began with a ride over a kerb and the grass that destroyed the floor of Hamilton’s car, and started sending debris into the path of his rivals before he was forced to retire in the pitlane. Bell meanwhile hunted down Brown for his third win.

Brown and Wallbank stalled at the start of race two, and Green led Motaworld duo Andrew Thompson and Bell through the opening corners. Hamilton made it a four-car scrap at the front on lap two, as Bell passed Thompson for second. It took another two laps for Bell to clear Green for the lead, while Thompson backed up several cars in a battle for third place.

Thompson’s defences worked to hold off Hamilton for several laps, and when he did concede third he then reclaimed it a lap later and made his defence of the position even tougher. This allowed the train of cars behind him to build back up, and Kapadia passed Hamilton for fourth when the latter locked his front brakes while trying to clear Thompson again.

Going into the chicane on the final lap, Hamilton tried a move on Kapadia. Rather than emerge in fourth, he finished fifth behind Piguet as Kapadia spun. There were some passionate paddock discussion from various parties afterwards.

Hamilton came eighth in the points, and he only had to wait one more race for a maiden podium as he finished third in the opening round of the 2002 FR2.0 UK season. That year included three wins at home, as well as a four-race Eurocup stint that featured a win, a pole, two other podiums and two fastest laps. His scoring rate there was better than anyone else’s.

“I certainly remember at Donington [in 2001], from the second race at Rockingham and the races at Donington as well, I thought he was doing rather well,” Shaw adds. 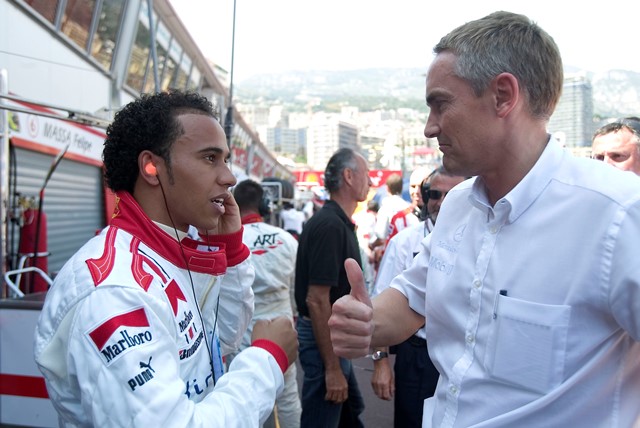 Hamilton with Whitmarsh while racing in GP2 in 2006

“As usual, the new guys coming in, they often find that when they’re having to deal with the peak of the tyre in qualifying – a short period of time to get used to a slightly different grip level in a qualifying session and probably changing conditions being a winter series – that maybe they don’t do their best work.

“But in the race, when the laps are consecutive and they’ve got more references about them in terms of other drivers and that sort of thing, you’ve got more time to move forward, then they would inevitably all move forward – the newer guys into the championship [from karting].

“Lewis came in with a bit of fanfare with McLaren [backing him], so if there was any pressure I suppose the team felt more pressure than the driver. He was always very relaxed, very easy to get along with with his engineer and mechanic, and I never had any trouble with him. What an amazing talent he seemed then, and what an amazing talent he turned out to be.”

Simon Finnis and Paul Hibbins were the two lucky members of the Manor crew who can call themselves Hamilton’s first engineer and first mechanic in car racing, and while perhaps they probably can’t claim they’ve influenced Hamilton’s success in recent years, they definitely had an impact on his improving FR2.0 form at the time with Manor, which culminated in title domination in his second full season in 2003. He took 10 wins, seven poles and nine fastest laps from the year.

Two years were spent in Formula 3 after that, winning the Bahrain Superprix, Masters of F3 and then the Euro Series, before taking the GP2 title as a rookie in 2006. That earned him a F1 seat with McLaren aged 22. The rest, as they say, is history.