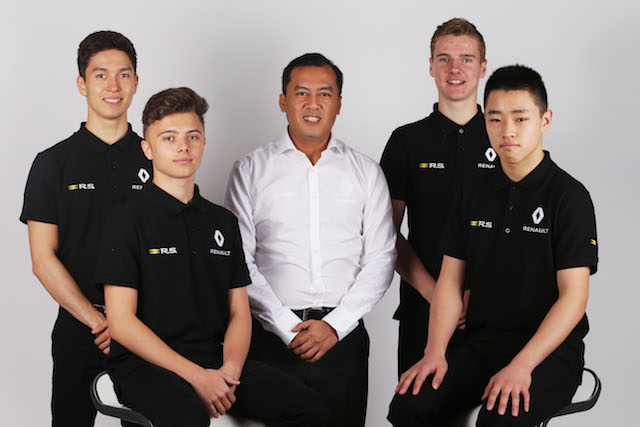 Formula 4 graduates Max Fewtrell and Jarno Opmeer have joined the Renault Sport Academy roster?for 2017, ahead of their debut seasons in Formula Renault.

The pair join GP3 racer?Jack Aitken and Chinese driver Sun Yue Yang – who will also debut?in Formula Renault this year – on the scheme based at the Renault Formula 1 team at Enstone and run by ex-Caterham GP2 chief Mia Sharizman (pictured, centre).

They will drive?for Tech 1 Racing and MP Motorsport respectively in Formula Renault, while Sun Yue Yang will race for JD Motorsport after joining the Renault fold last year while still in karting.

Renault has previously pledged to?induct two drivers from the 2017?Eurocup – including the champion – to the academy and support them for 2018.

Aitken, the 2015 Formula Renault Eurocup and Alps champion, will switch to ART in GP3 after finishing fifth last season?for Arden.

There is no continued place in?the academy for Oliver Rowland, Louis Deletraz and Kevin Jorg, although Rowland may yet maintain?links to Enstone?after joining Nicholas Latifi at DAMS in GP2 for this year.

Deletraz will race in GP2 for Racing Engineering after finishing runner-up in Formula V8 3.5 last year, while Jorg stays in GP3 with Trident.

Sergey Sirotkin becomes the Renault F1 team’s official reserve driver after finishing third in GP2 for the past two seasons. He has been linked with a race seat in Super Formula for the coming season.