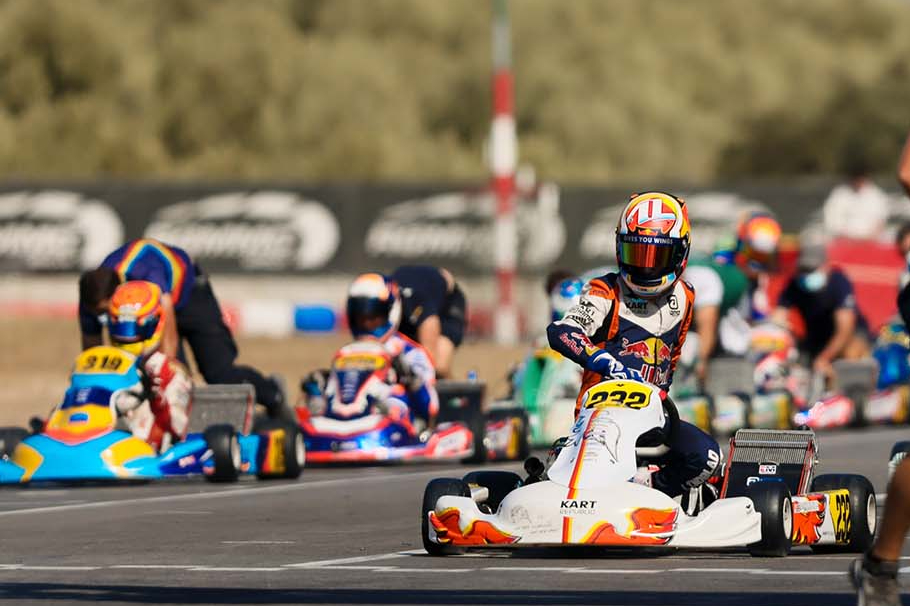 Formula 1 team-backed youngsters Andrea Kimi Antonelli and Arvid Lindblad returned to their previous classes in karting this weekend, but both had their comebacks with Kart Republic cut short.

Prema’s Formula 4 race-winner Antonelli, a Mercedes-AMG F1 junior, went back to the KZ2 shifter kart class while Red Bull’s KZ2 rookie Lindblad returned to OK for the Champions of the Future Winter Series at Franciacorta in Italy.

Antonelli came second in qualifying, and was second in one of his Saturday heats after copping penalties in the other two. He didn’t continue to Sunday though as he had to leave for a clashing event, and apologised to his team for his swift exit.

Tony Kart’s shifter karting veteran Simo Puhakka won the final in a controlled display, and in fourth was another junior single-seater racer: Laurens van Hoepen. The Dutchman was third in the Formula Regional-spec Ultimate Cup Series Single-Seater Challenge in 2021 and switches to FRegional European Championship with ART Grand Prix for 2022.

Lindblad also went no further than Saturday in OK. He qualified sixth for his first heat, 12th in qualifying, and crashed out in an incident at turn three.

Oliver Rowland’s protege flipped and he landed body-first upside down before letting go of his kart. There was immediate medical attention, and Lindblad was then transferred to hospital where his father provided an update on his condition.

“[Arvid] is in a lot of pain and finding walking difficult but is recovering in hospital,” he said.

“He has a broken thumb and extensive tissue damage, and will be operated on likely tomorrow [on Monday]. We hope that he can return home with his mum as soon as possible. The recovery will take some time and we will do all we can to make sure he is comfortable.

“We and Arvid are very upset about the incident as it could easily have ended up being something much more serious. As a result, we have requested that the organisers RGMMC Group and [its president] James Geidel do a full and comprehensive investigation into the accident so that this doesn’t happen again to improve the safety for all drivers and the sport.”

He added: “I will keep everyone up to date if anything changes.”

Anglo-Swede driver Lindblad is set to debut in F4 with Van Amersfoort Racing this August once he turns 15 years old, and his primary programme is on KZ2 karts with SP Motorsport.

Latvia’s Tomass Stolcermanis dominated the CotF WS OK final, with Joe Turney – who is eyeing a move to F4 – classified second before being penalised 10 seconds for overtaking under yellow flags.

Matheus Ferreira had a strong start, ran as low as eighth, but ended up as the runner-up. Joel Bergstrom, who starred earlier in the weekend, was the top non-factory driver in sixth.