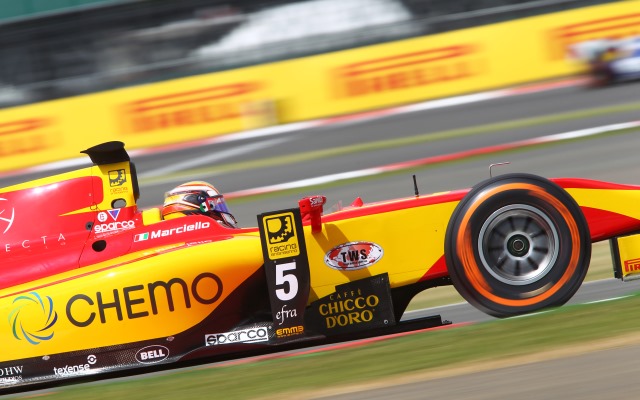 The Ferrari protege, who had scored a double podium two weeks ago in Austria and set the practice pace at the British circuit, set pole with his first proper flying lap.

The top three positions would all be set early in the session. Jolyon Palmer went quickest with his first lap, and Mitch Evans then fell 0.006 seconds short of the championship leader before Marciello bettered the benchmark by 0.027s.

Quicker first sectors later in the session from Marciello and Evans made it seem as if they could improve their times, but they would both lose time towards the end of the lap.

Julian Leal got up into fourth shortly before the halfway point of the session, and ended up just 0.039s adrift of pole. Stoffel Vandoorne was fifth, two tenths off, while Felipe Nasr was sixth.

After the chequered flag had flown and it seemed as if Marciello was safe in pole, series debutant Marco Sorensen looked like he could cause a major upset with a lap that was two tenths of a second up on the pole lap after two sectors. In the end, the Dane would end up seventh with the same time as Nasr.