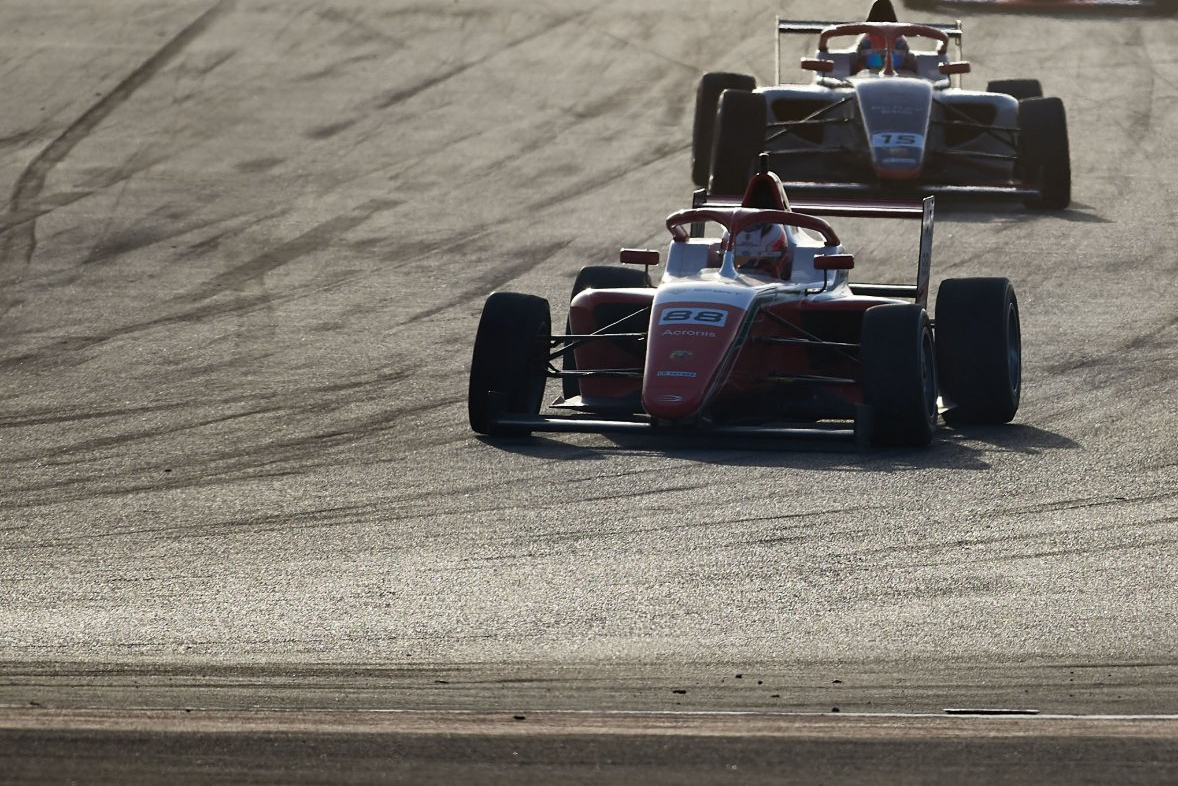 Prema’s Charlie Wurz and Rafael Camara topped Formula 4 United Arab Emirates qualifying at Dubai Autodrome, as the series switched to the Grand Prix layout for its third round.

In Q1 it was primarily a battle for top spot between Camara and Wurz, although PHM Racing’s Taylor Barnard got to the top first with a 2m00.903s lap that put him 0.018 seconds ahead of MP Motorsport’s Miron Pingasov.

Camara took over in first place by bettering Barnard by half a second, with Wurz slotting into second place 0.367s behind.

Next time by the pair were separated by PHM’s Nikita Bedrin, and with four-and-a-half minutes left on the clock there was a few seconds where Hitech GP’s Luke Browning was on provisional pole before Wurz improved to a 2m00.258s.

Camara’s next effort brought him back onto the front row, 0.035s slower than Wurz, then with two-and-a-half minutes remaining Wurz went even faster. That was enough for pole, with Camara and Browning qualifying second and third.

The returning Andrea Kimi Antonelli, taking over the Abu Dhabi Racing by Prema car previously driven by points leader James Wharton, was fourth fastest ahead of team-mate Aiden Neate who was the only driver in the top 10 to improve late in the session and move past Bedrin for fifth place.

It took a while for representative laptimes to be set in Q2, with Camara, Mumbai Falcons by Xcel Motorsport’s Sohil Shah, Cram-Hitech GP driver Ricardo Escotto and MP Motorsport’s Tasanapol Inthraphuvasak all spending time at the top early on.

Sauber Karting graduate Christian Ho was the first driver to set a sub-2m01s lap, with the Singaporean making his car racing debut this weekend, but it wasn’t long before Camara returned to the top.

As the session went into its final five minutes the order mostly set itself, with Camara breaking into the 1m59s, and Browning initially being the only other driver able to do the same.

Ferrari junior Camara secured his first car racing pole, with Neate able to get himself into second place with a lap that was just 0.032s slower than the poleman’s.

Series debutant Browning’s own 1m59s lap put him 0.045s behind in third, with Wurz and Antonelli unable to find improvements and ending up fourth and fifth.

Ho qualified sixth, and ended his session early by pitting while others hoped to find improved track conditions at the end of Q2.