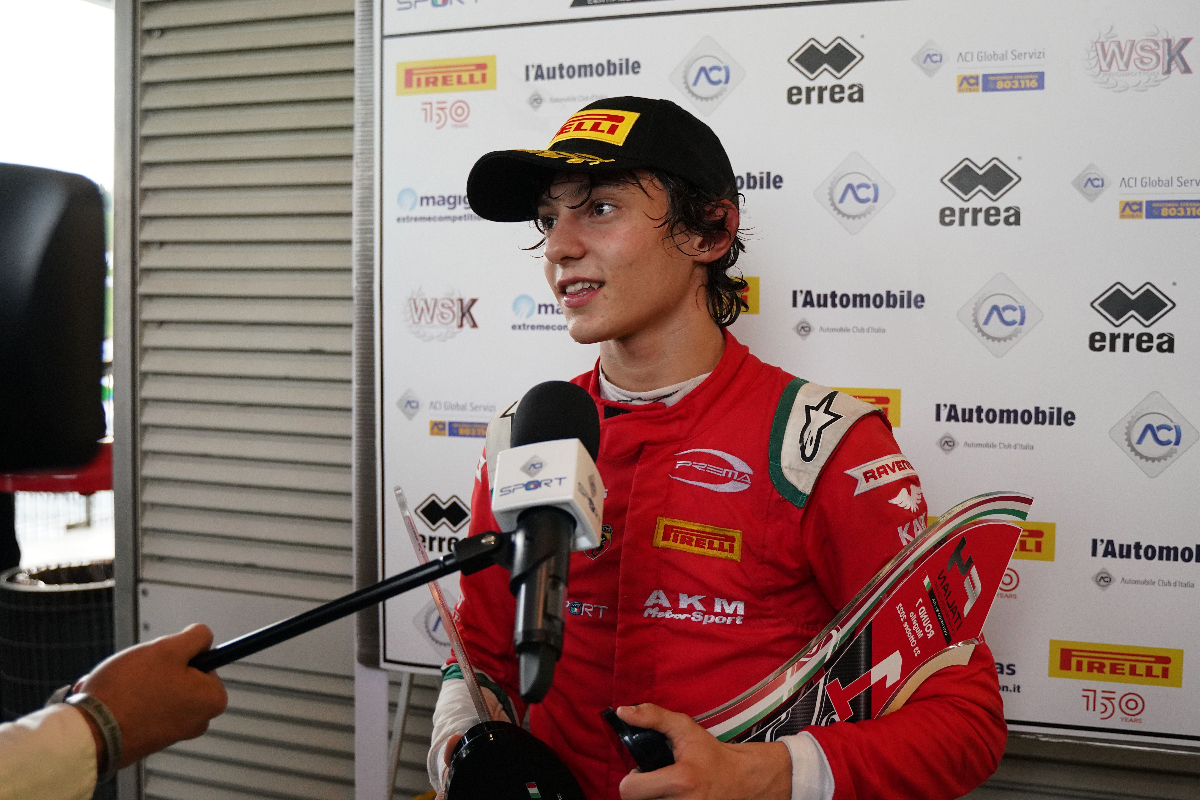 Andrea Kimi Antonelli joins the Formula Scout Podcast to look back on his outstanding year in F4, his coming graduation to FRegional and how both Prema and Mercedes have supported his development

The numbers alone – 26 wins from 45 Formula 4 starts – do not do justice to Andrea Kimi Antonelli’s 2022. The Mercedes-AMG Formula 1 junior won both the ADAC and Italian titles, only the second driver to achieve the double, and finished the year by claiming the gold medal in the FIA Motorsport Games, representing Italy.

He came into the year as a hot favourite for honours and admits that “at the beginning of the year, I felt a bit of pressure, to be honest, because it was the start of the championship and I wanted to start well immediately”.

Unfortunately for Antonelli, the first round of the Italian championship “was quite a bit of a disaster, let’s say,” meaning he “came away with only one point at the end of the weekend”.

Immediately falling 57 points behind leader Alex Dunne after just one round heaped extra pressure onto then then-15-year-old’s shoulders. 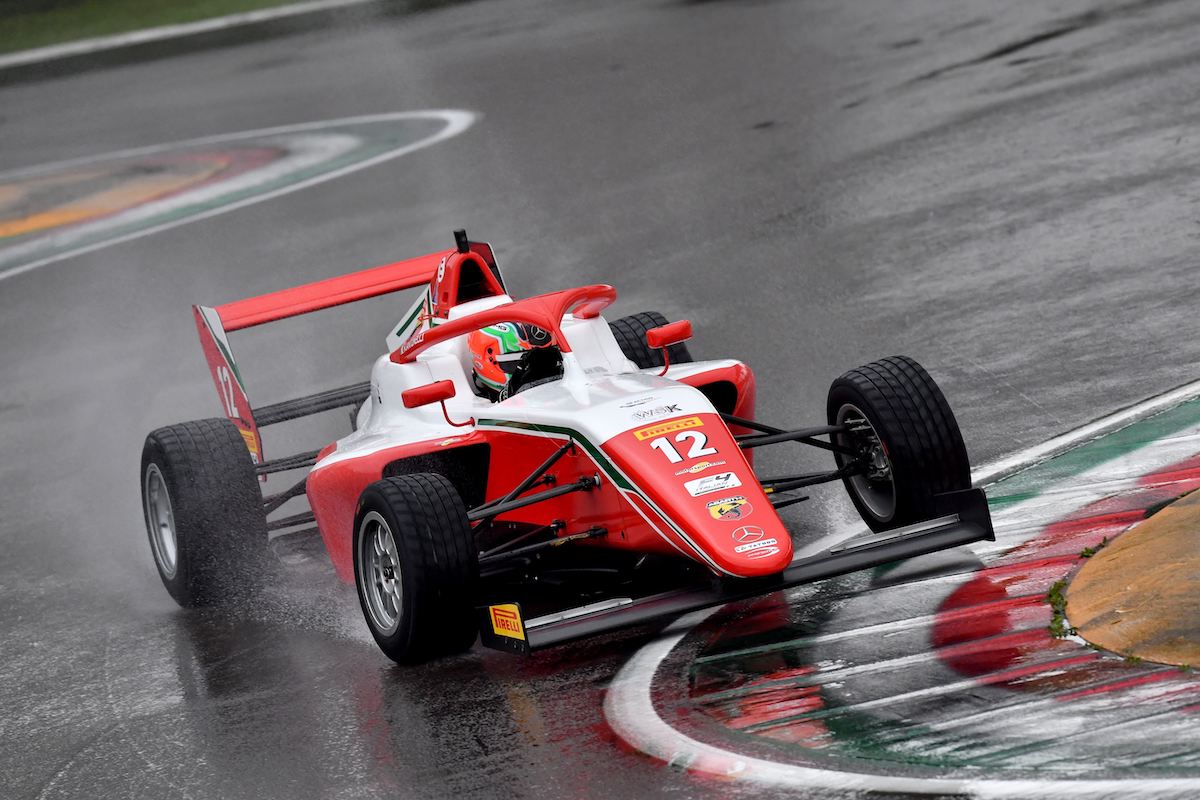 “I felt inside myself that I had to recover immediately all those points. So that pressure I felt quite a bit in the first few rounds, but then when I saw that I was coming back in the championship and the speed was really good, the pressure went away and I started to enjoy [it] more,” he says.

“The pressure didn’t go away only because I was seeing that I was recovering but also because I was making more experience with the car. And I was knowing more all the drivers. So when I was going on track, I kind of expected what could have happened.”

“By half of the championship, especially after Vallelunga when I took the lead back, that was like a turning point for me because I mean the pressure was fully away. From that moment I just tried to keep working hard and enjoy as much as I could.”

In fact, after that opening round in Imola, Antonelli started an Italian winning streak that brought him nine wins in his next 10 starts. He explains that the Imola weekend had “motivated me to work even harder to recover all those points,” and, as a result, he says that he started driving “a bit more aggressive, but in a smarter way, to avoid any kind of contact or pressures and any kind of losing more points”.

“I was also thinking more and I was learning from my mistakes to not repeat them again, which was really important during the year because I think also that helped me to get the lead back in the championship,” he adds.

Despite his results, “I didn’t relax at all, I knew the championship was still long and I kept working really hard to then win as many races as possible and also to bring home the championship”.

There was, however, no danger of him becoming complacent as win after win came his way. 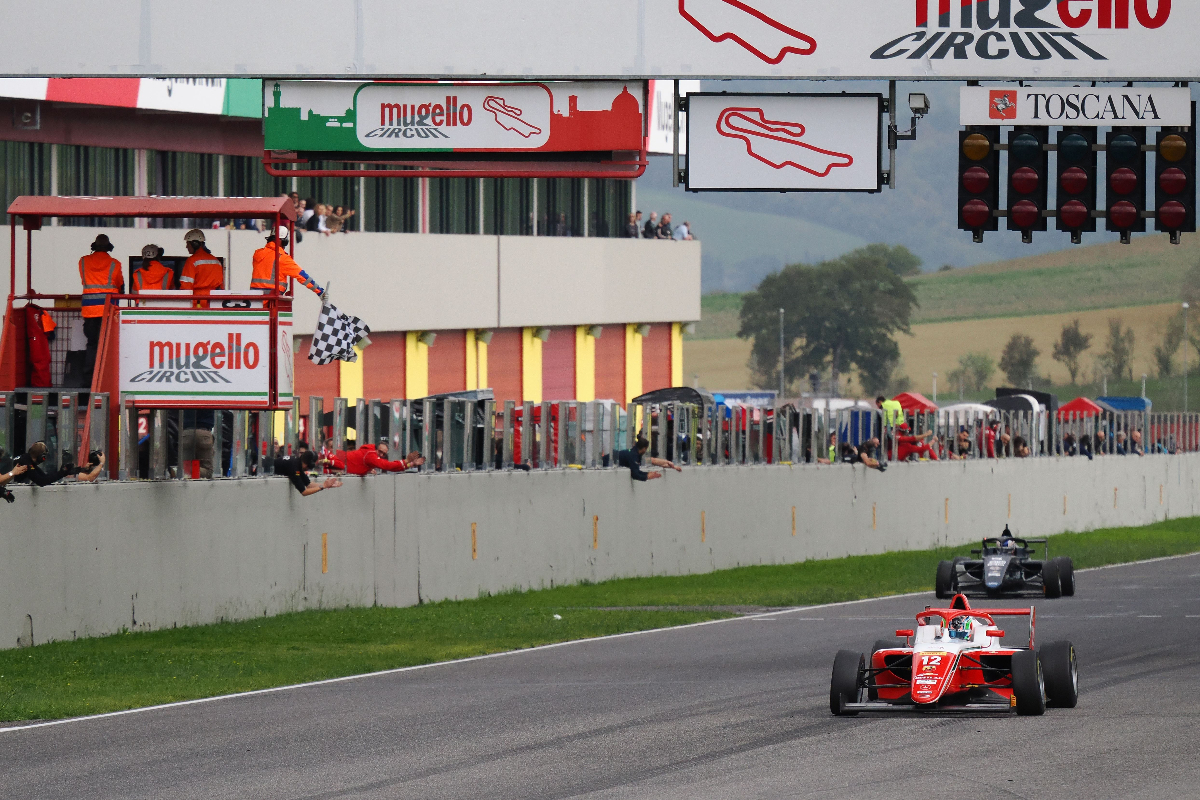 “It’s never easy,” he says. “There’s always something that challenges you and makes your life tougher on track. Also at the end of the championship I was trying to push myself to do even more. And I think in Mugello [the final Italian round], I pushed myself further, especially in race pace. I was really happy and satisfied because I was able to keep a good pace in Mugello.”

The Mugello weekend featured a clean sweep of race wins, his third treble of the Italian season and fourth in total for the year, which had required him to come through from eighth on the reversed grid to win.

“The pace that weekend was really, really good,” he remembers of his ADAC F4 treble at Hockenheim. “We were really strong in managing the tyres that weekend, which was a key point for the races. And in the previous two races I was able to manage a bit the tyre and that really helped me for race three, because I had the tyre advantage compared to my opponents.

“Starting the race, I had straight away a really good pace. And after a couple of laps, I got into the top three and then I saw I was catching and catching lap by lap. And once I got the lead I just kept pushing, and I said, ‘I can win this’.”

Neither championship was straightforward though: “The Italian was tough because we started in the beginning of the season quite badly and the German because we [missed] one round and that makes the opening to close up. So, let’s say both were really hard.

“I was really happy to have won both because, at the end, the German the level is still high because still most of the good drivers are there.”

Antonelli gives much of the credit for his outstanding season to his team, Prema. “During the year, especially in the beginning, as a team we worked really well. As team-mates we were pushing each other to do even better and [having] that many drivers in a team helps a lot, because you can try many different things on the car on every driver. 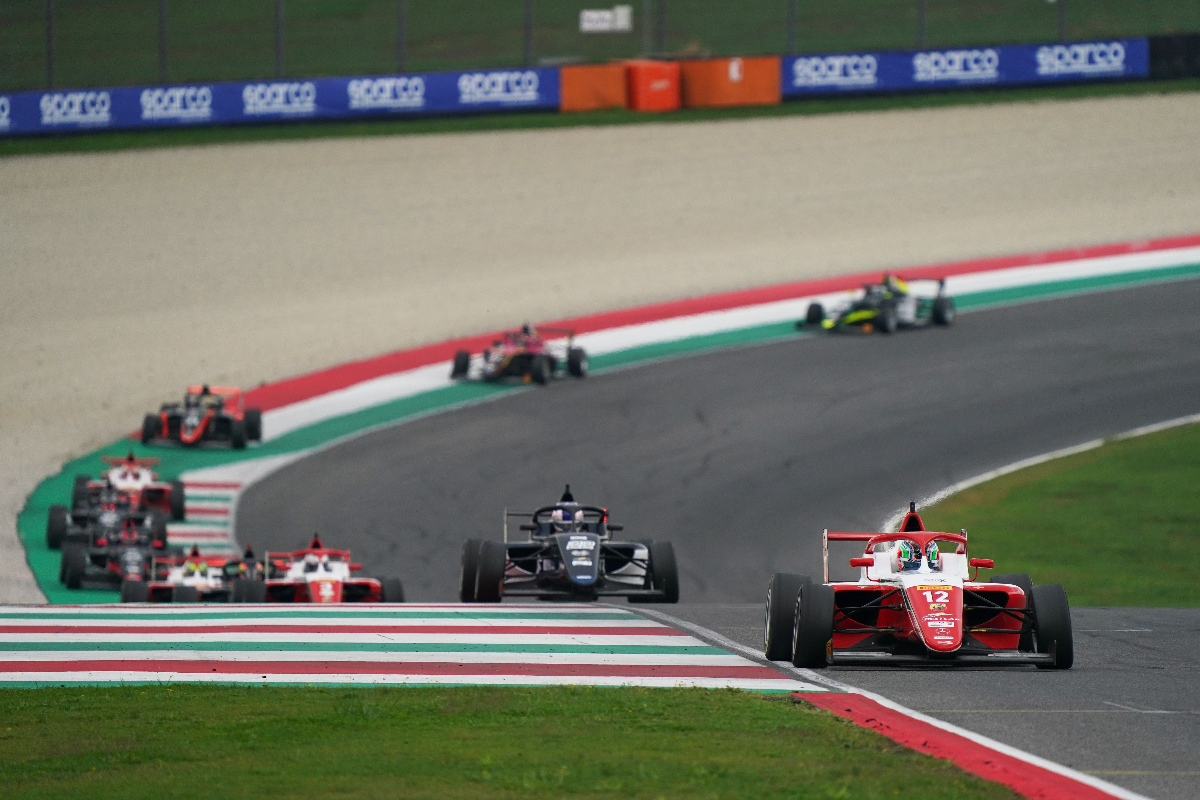 “In the beginning of the season, we worked a lot on the car. We were trying a lot of stuff to then find the best solution and then once we started the championship we put it all together and I think as a team, we did an amazing job all season. I think the results speak by themselves.”

Prema’s remarkable team effort meant that Antonelli was often left only fighting for wins with his team-mates, not least Ferrari junior Rafael Camara. Their battles provided some of the season’s highlights and although Antonelli generally had the better of their exchanges, he has nothing but respect for the Brazilian:

“He’s a great team-mate and I learned a lot from him. He was really fast during the season. Obviously, we were rivals, but at the same time we were respecting a lot each other and also in the fight. I think everyone saw we were fighting hard, but we were fighting fair and without making any contacts or stupid pressure.”

To Antonelli’s pleasure, the two are set to stay with Prema for the step up to Formula Regional in 2023, although Camara’s move up is yet to be confirmed.

With double F4 champion predecessor Ollie Bearman having been a rookie sensation in FIA Formula 3 after graduating directly from F4, surely Antonelli must have been tempted to made the same jump as his Prema stablemate?

He emphasizes that the motivation was “not because of the speed [difference] but because of experience”.

“Obviously F3’s a really hard category; it is a big step from F4. I fully understand that [decision], and I believe in that, because I think Mercedes is doing everything possible to make me achieve good results.” 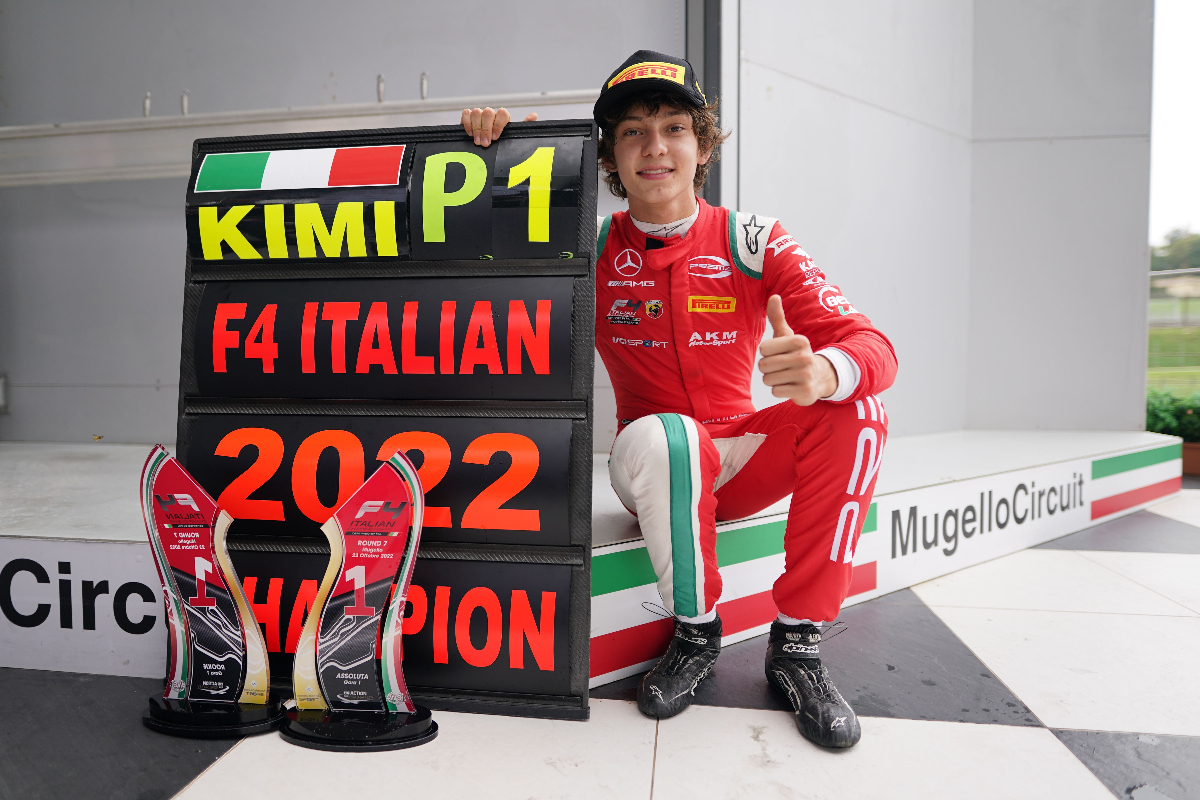 Antonelli believes the support he gets from Mercedes, both on and off-track, has been vital in his development as a driver and a person.

“On track they always send me a person who follows me and helps me with food and everything, with the physical aspects as well. Then off track they help me especially with the physical side, to train and also to get stronger and especially to be ready for the next time I get in the car. I believe their support is incredibly important.”

After an initial contact thanks to the Minardi family, Antonelli and Mercedes have been working together since the end of 2017, “back in the days when I was racing in mini karts”.

“We got the call from Mercedes, and you know when you get those calls you never think twice. You just say yes. Because it’s an opportunity that doesn’t happen often so and you need to take it.

“Then in 2018 I entered in the Mercedes academy and first was a contract of one year because they wanted to kind of test myself to see my abilities and how I was behaving on track and off track. And then after 2018 we extended the contract and now I’m still with them so I’m really happy for that.”

One thing remains on his bucket list though, a run in the team’s F1 simulator. “I was supposed to go there to have a lap on it but unluckily with COVID-19 it didn’t happen. And then I tried this year but was too busy with races and also when I was racing most of the time there was F1 racing as well. So, it was really hard to organise it, but I hope in the future, when we have more time, I hope I can try it once.”

Formula Scout has no insider knowledge of Mercedes’ F1 simulator schedule, but it seems reasonable to assume that Antonelli will get far more than one run in the future! 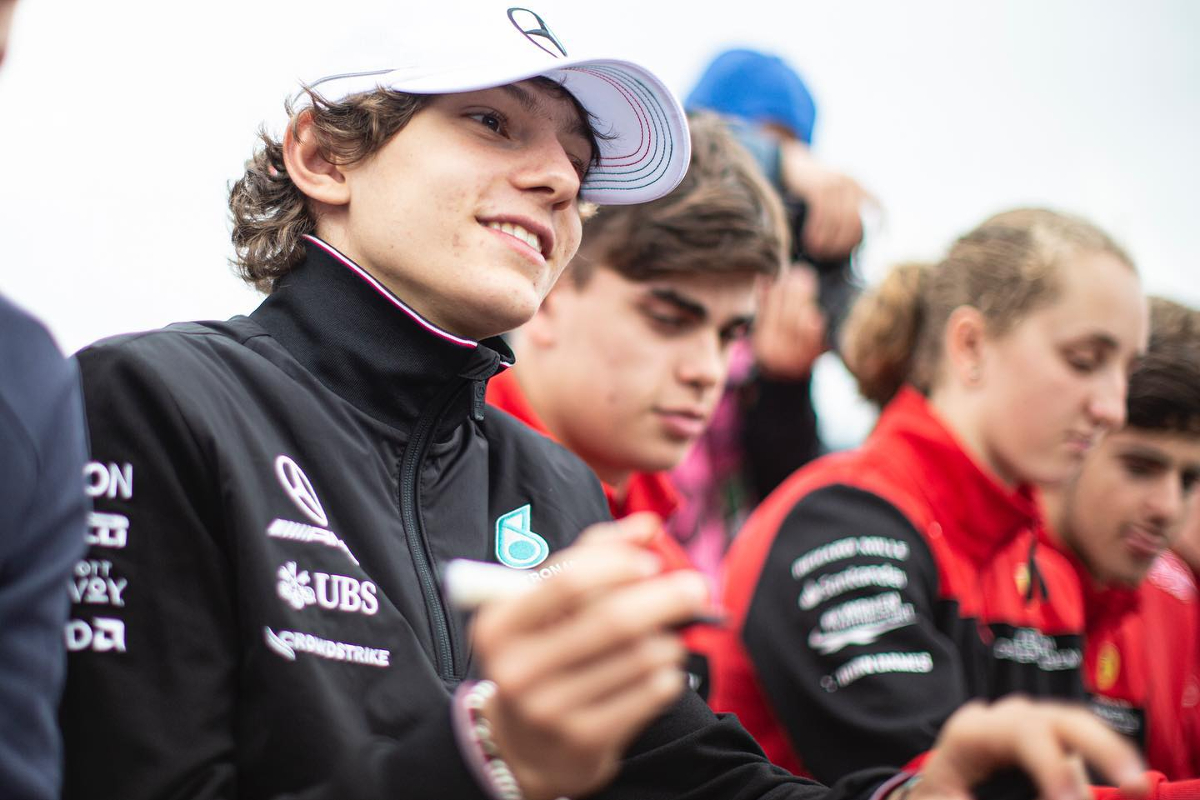 For 2023 he is focused on FRegional, starting in the Middle East series in January to learn the Tatuus T-318 car, before then embarking on a FRegional European Championship campaign. FREC has proved a tough environment for rookies to shine over its last two seasons, with only Isack Hadjar able to win races, but Antonelli is not fazed by that.

“It’s not like F4 where most of us were rookies. In FRegional there are more experienced drivers, so it’s going to be tougher, but I believe the speed is good and if we work hard, we can achieve a good result,” he says, before stressing that “and obviously the goal is to win, to win the championship”.

Antonelli displays such a level of maturity, both on and off-track, that it is hard to believe that he is still just 16 and only made his car racing debut less than 15 months ago. But he has the time to take a measured approach, guided by his family, Prema and Mercedes.