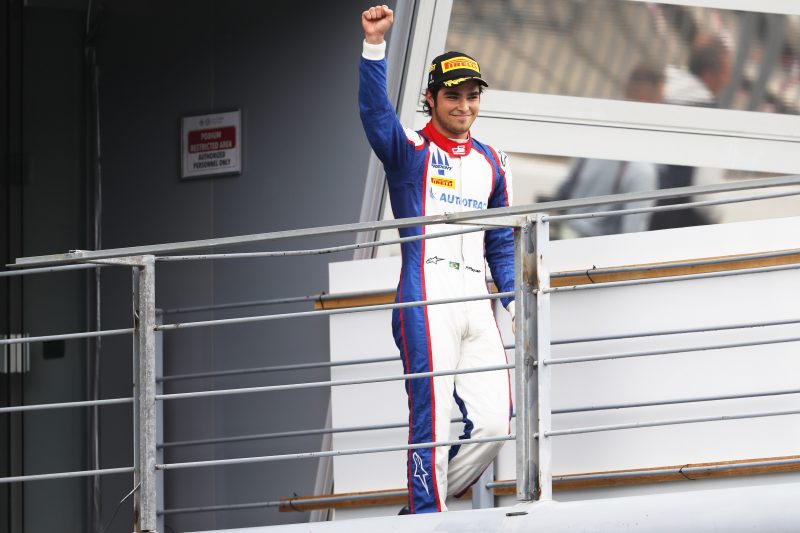 Pedro Piquet beat Trident team-mate Giuliano Alesi in a titanic battle for victory in the second race of the GP3 weekend at Monza.

In what was the closest race of the 2018 season, the top three were separated?by 1.2 seconds while the first seven cars were split by just 3.3 seconds at the end of the 17-lap race.

Piquet launched from second on the grid to lead, withstanding an attack from a similarly fast-starting Alesi at the end of the opening lap prior to a safety car intervention.

Alesi managed to pass Piquet at Curva Grande on lap eight. The two would exchange the lead twice on lap 12, with Piquet making a successful pass in the heavy braking zone at Turn 1, before Alesi re-passed him again through Curva Grande.

However, Piquet made the race-winning move on the inside line heading into the Della Roggia chicane on the penultimate?lap of the race. Alesi maintained the challenge to the chequered flag, but was unable to recover the position and ended up second to Piquet by 0.419s.

Behind the leading Tridents, the ART Grand Prix team-mates endured a similarly intense scrap. Despite having run in third for the majority of the race, championship leader Anthoine Hubert was beaten to the podium by his title rival Callum Ilott.

Ilott was able to pass Hubert with the use of DRS with four laps remaining. Hubert nearly managed to scythe back into third place on the final lap, but for a stern defence from Ilott into Lesmo One.

Nikita Mazepin suffered in the opening stages of the race. He was tagged by Hubert as the two battled for space at Turn 2 on the opening lap.

Running deep on the brakes into the Roggia chicane, Ilott was one of a number of cars to pass as Mazepin dropped to eighth place.

However, his fightback brought him back into contention late on as he threatened Hubert in the closing stages at the tail of what developed into a five-car leading group in the final laps.

The fourth ART driver Jake Hughes charged through from 10th at the end of lap one to finish in sixth. He was the fastest car on track at several points in the race and managed to catch his team-mates on the final lap, after having demoted Saturday’s race-winner David Beckmann to seventh place in the closing stages.

Tatianna Calderon climbed into the points from 15th on the grid, finishing in eighth place for Jenzer Motorsport.

Her team-mate Juan Manuel Correa was involved in high-speed lap one crash on the run to the Ascari chicane. Making contact with MP Motorsport’s Devlin Defrancesco on the straight, Correa was forced onto the grass and spun back across the track into the path of Arden International’s Gabriel Aubry.? The two were unscathed and the safety car was deployed.

Despite starting the race on pole position, Richard Verschoor finished in 11th. He still led home his MP Motorsport team-mates in what was only his fourth GP3 series race.