Pierre Gasly flies to pole for GP2 opener in Barcelona 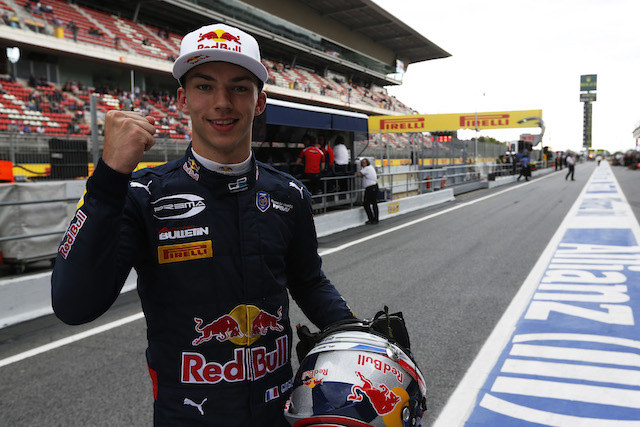 Prema will start its first ever GP2 race from pole position after?Pierre Gasly topped qualifying in Barcelona by almost half a second.

The Red Bull Junior led after a frantic opening to the session following a brief and light rain shower, before ART newcomer?Sergey Sirotkin took over at the top when he opted to do his second run during the middle of the session.

Inside the final six minutes,?Alex Lynn and?Norman Nato both took very brief turns on top before Gasly posted his pole lap, which would never be challenged with most drivers returning early to the pits.

On pole for the third consecutive round and fourth time from the last five events, Gasly’s advantage over fellow Frenchman Nato was 0.464 seconds, with Lynn almost a couple of tenths further back in third.

Lynn’s DAMS team-mate?Nicholas Latifi claimed fourth for the start of his first full GP2 season, with Sirotkin ending up fifth.

Gustav?Malja?was undoubtedly the surprise of the session, beating Formula Renault 3.5 champion?Oliver Rowland to sixth place. Second to Gasly in the early stages, Rowland ended up exactly a second behind his long-time rival after running wide out of the chicane on his best lap.

The drivers from eighth to 11th were separated by just 35 thousandths of a second, with?Nobuharu Matsushita pipping?Artem Markelov to eighth by just 0.001s, while?Luca Ghiotto edged out fellow Italian?Antonio Giovinazzi?by 0.02s for the honours of top?debutant and a place in the top 10.

Raffaele Marciello, Jordan King and Arthur Pic were next up, while?Mitch Evans was only 18th in a nightmare first qualifying with Campos.

UPDATE:?Matushita and?Sean Gelael were penalised for incidents while “squabbling over track position”, with Matsushita to now start 11th and Gelael from the pits.