Phillippe Denes is the inaugural Road to Indy eSeries champion, but hasn’t had the same success in the real world. Could 2020 be his year in Indy Pro 2000 with top team RP Motorsport?

Before coronavirus called an end to the weekend, the Indy Pro 2000 season did begin in St. Petersburg in March, and those who were watching the single free practice session were trying to pick out as much as they could.

Denes has been the man to take up the mantle of pacesetter since the successful launch of the Road to Indy’s own Esports series. It takes place on iRacing, and so far has raced on the circuits that Indy Lights, IP2000 and USF2000 visit in real life.

The Hungarian has been on racing games almost all of his life, and aquired his first simulator in 2012. As he was in karting at the time, he spent most of his time on the Kart Racing Pro game against the likes of Eves and NASCAR driver Andre Castro.

They soon moved on to iRacing, the programme seemingly at the centre of the motorsport world at present, and have been racing each other in their free time ever since as it has improved with more cars, laser scanned tracks and realism.

The inaugural RTI eSeries season featured drivers from all three rungs of the Road to Indy, and some of the team bosses, and started off at a virtual Barber Motorports Park using the previous generation IP2000 car. 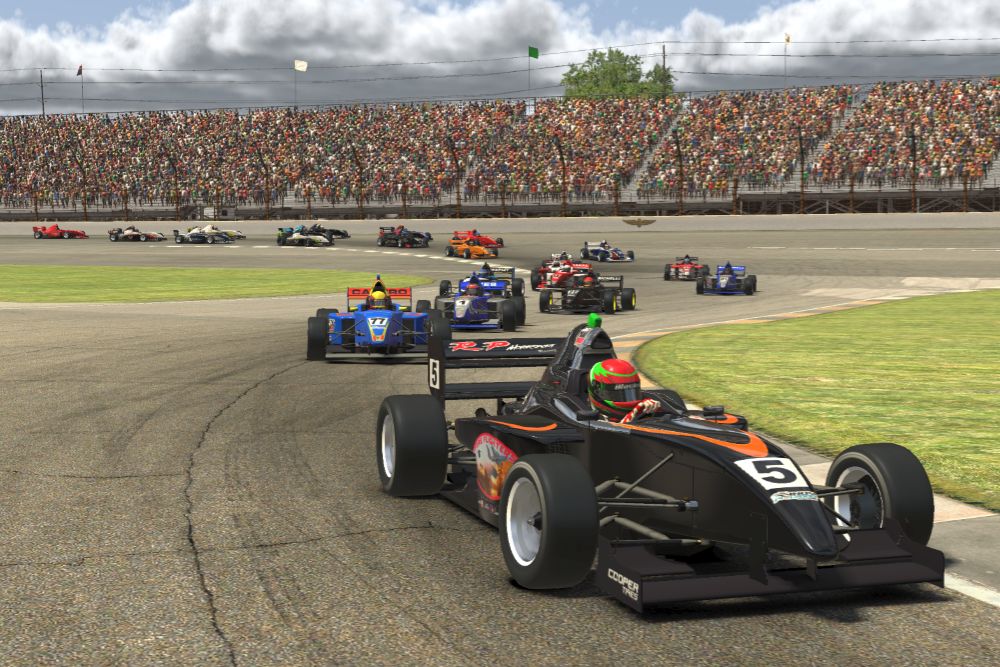 “I was expecting it to be pretty serious because it’s Road to Indy,” Denes told Formula Scout. “I didn?t think it was going to be the paintjobs and everything, they went all out, but I was definitely expecting something good from them, and I wasn?t let down. It was definitely a good series. I?m looking forward to the next one too. They?ve selected an interesting schedule.”

Denes was pipped to Barber pole by Turn 3 Motorsport boss Peter Dempsey, and he ran in second until the leader recieved damage after lapping a car. His path to victory (off the back of around six hours of event-focused sim practice per day) was then cleared further when his Pabst Racing rival Eduardo Barrichello lost time with his unexpected pitstop.

“There wasn?t supposed to be a pitstop but we didn?t have enough fuel. And everyone kind of liked it, so they just decided to stick with it and have pitstops during the races. It just adds in that little bit of excitement.”

After his Barber win, Denes dominated at Circuit of the Americas, then had a strategic duel for victory with Eves on the Indianapolis road course. Almost every lap they swapped places, and were talking online throughout to cooperate. Eves decided against passing Denes into Turn 1 on the final lap, but he was let through some corners later. He returned the favour at the final corner in order to slipstream past on the line but miscalculated, and Denes won by 0.098 seconds.

Denes was quick to realise the time that could be gained in nailing pitstops, but he accidentally pitted twice at Road America and ended up third behind USF2000 regular Barrichello and Andretti Autosport’s Danial Frost.

“You don?t really notice [the variety in experience],” Denes explained. “People like to think that as the drivers get older they get better and better, but it doesn?t matter what series you?re in. If you have that pace, then you?re going to have that pace for the rest of your life pretty much. The top drivers in USF, Indy Pro, Indy Lights, even the team owners, are on that same level.”

Unlike IndyCar’s Esports substitution for real racing, the Road to Indy competitors don’t have the support of engineers and spotters, but advantages can be gained by the simulator hardware. Denes believes the pedals he uses are the best you can buy for a home setup, and do make the difference when he’s pushing the limits against his rivals (and friends).

“It?s a pretty big difference actually. I think the thing that having a nice setup really helps with is getting that last bit of time out of the car. With any sim setup, if you get comfortable with it you can definitely lay down quick laps. But there?s that last little bit of time in it you can?t get out.

“Lets say in real life you drove off the track, you put two tyres off and you hit like a bump, you could still probably bring that back fairly easily. In iRacing you?re pushing a little bit harder than you would in real life just because you can with no consequence. If you go wide and hit a bump on the grass, you would just lose the thing instantly. I think that?s one of the bigger mistakes that a lot of people make. And with the nicer setup you can judge where you?re going to be exiting the corner or you can kind of prevent stuff like that from happening.”

The lack of feel compared to a real car (unless on a motion rig) makes being consistently fast harder than real life as well.

iRacing is adding the current IP2000 car soon, but whether Denes gets to continue racing that car is not a certainty, as he hasn’t secured the budget for the full 2020 season. According to the 21-year-old there is a sponsor looking to plug that gap, which is “getting close” to fruition and is no doubt helped by the fact that his name is in the headlines due to the eSeries.

“I’m just getting my name out there, people seeing what I can really do when we have an equal playing field. 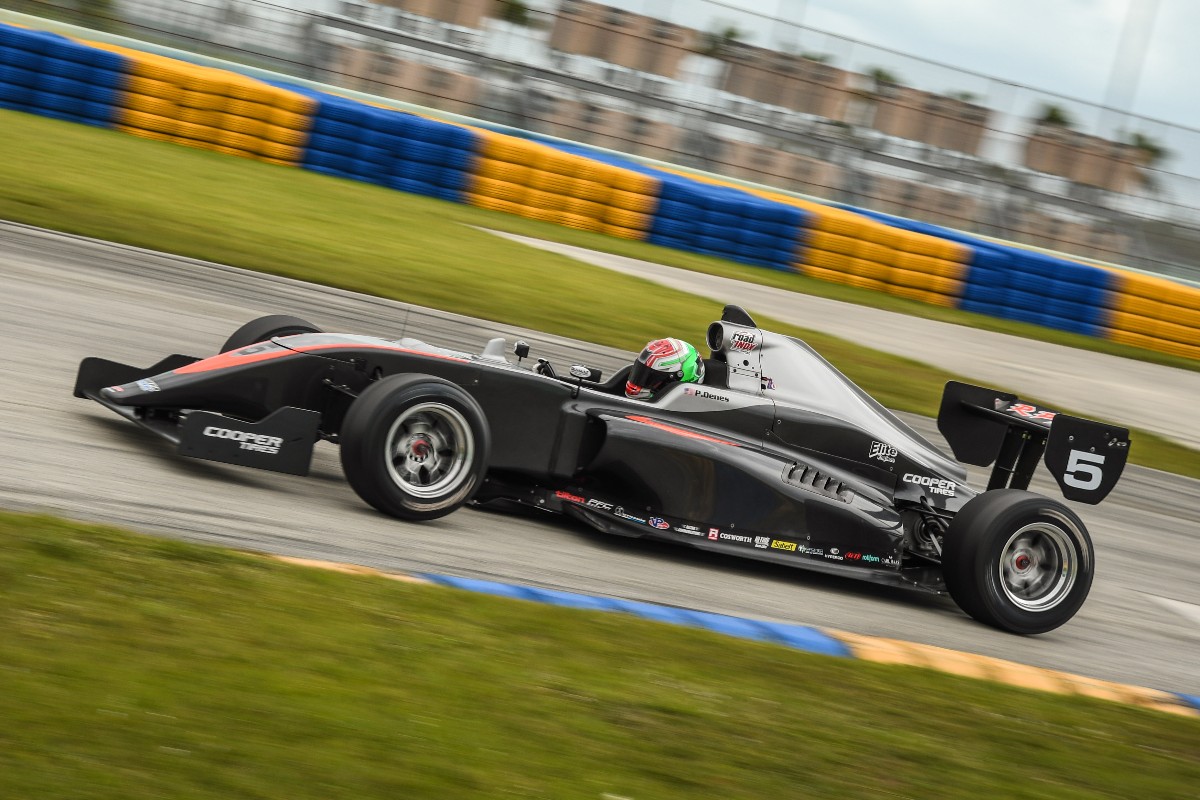 “I wish that IndyCar would have reached out to me because I was champion. I was expecting at least like a one-off [in the IndyCar Challenge].

“I honestly think if I did the IndyCar race, I could definitely be up front, competing with those guys, like I could?ve taken it to Lando Norris at COTA.”

The fixed set-up used in the eSeries does nullify Denes’ experience there, but is the real world racing not on equal terms too?

“It?s not a huge margin, but there?s definitely a margin between the top teams that can confidently go to a track and nail the set-up almost every time versus a team that doesn?t really have that data to just throw on a set-up and have that knowledge of: we know this is going to be good.

“I drove [RP Motorsport’s] car in St. Pete and it felt amazing. They definitely have a solid package on their hands. The balance of the car felt really good, and with the results of last year and the year before, I can confidently say that they have a car that is competitive at most of the tracks, if not all of them.”

RP ran the dominant Kyle Kirkwood to the title in 2019, while Denes was 11th in an incomplete season with FatBoy Racing and Exclusive. He’d also entered four races in 2017 as a 6’1″ race-winning graduate of F1600 Championship Series. Being able to fight at the front with a top team in St. Petersburg, in the one session that ran, actually caught him off guard.

“I was trying to get accustomed to the track again and get a feel for the car. I was well in the top three, for sure. But little mistake, we had a red flag and I was in second, and then – it?s been a long time since I?ve been, you know, up front like that.

“So I got a little excited then I started overdriving in those last couple two or three laps. Made a little mistake on my final lap which didn?t let me get a laptime in, but I think we would have been right there in qualifying.”

It’s not only single-seaters in which Denes is adept in, having starred in a few sportscar appearances in Europe in 2018. One of those was the Silverstone 12 Hours, in which he won his class in a race of constently changing weather and prepared for with famed simulator racer Rudy van Buren at his Zandvoort workshop.

While Denes hasn’t had the same success in the Road to Indy, his racing credentials earned him a instructing job at his local track Laguna Seca. His 6’3″ stature doesn’t act as a weight penalty there in the BMW he’s usually pedalling, and neither does it in iRacing, where he’s also raced (less seriously) in rallycross with USF2000-bound off-road expert Christian Brooks.

Eves is of course his main rival, and he knows how good his friend could be on his step up to IP2000 this year. Before then they have a second eSeries season to tackle, and the added element of oval racing means it’s anyone’s guess who could win.

“For the second series, I just want to do the best I can. It?s going to be a whole different ballgame for sure. I saw Laguna Seca was on the schedule so I definitely want to win that one, but the oval races are kind of new to me. I only did Lucas Oil last year. I?ve got a little bit of oval experience, I?ve done some on iRacing, I?ve got to practice a little bit more.”